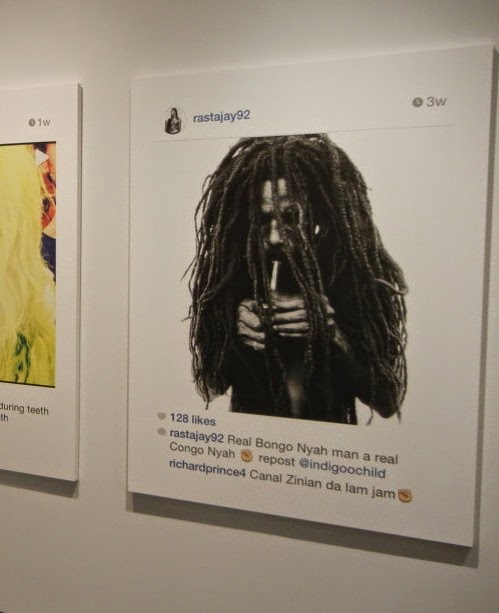 Readers may well be familiar with Richard Prince who is described as an appropriation artist. We have featured him (here and here) on several previous occasions on this blog, as well as on the IPKat. In his most recent controversial exhibition Prince took images from various social media sites such as Instagram and Facebook and blew them up to be large enough to hang on a gallery wall, along with a suitable price tag in the region of $100,000. The only change Prince made to these works was to add a comment of his own which did not appear in the original posting. It is argued by some that this addition, plus the fact that Prince's 'works' now hang in an art gallery, is sufficient to invoke the fair use defence of being transformative. To date none of the individuals whose images have been appropriated have chosen to test this assertion in court.

However one, a model named Selena Mooney, has chosen to play Prince at his own game by offering a replica of Prince's 'work' based on her image, for sale at $90 while the price tag on the Prince piece is $90,000. In fact her replica is not identical to that of Prince, because she has  included another comment after his; in other words she has reproduced her own Instagram posting in a larger size, but in a way which references Prince's work. 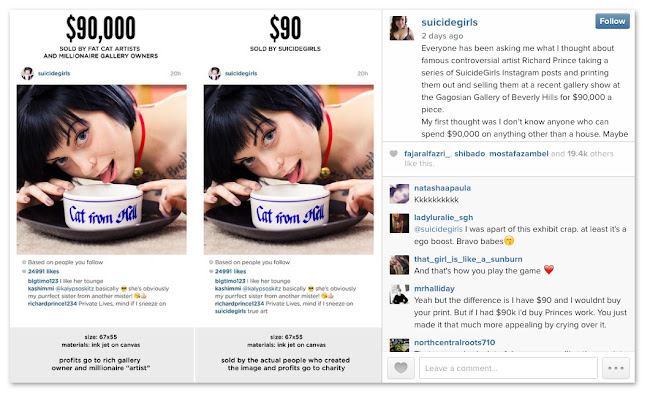 This has led to all sorts of speculation about whether her work infringes Prince's. Some maintain that it must do, because she has not done enough by way of alteration for it to be transformative. This seems bizarre: Prince adds a comment and this is felt to be transformative, yet if Mooney adds a further comment that's not transformative? The issue appears to revolve around the purpose of the two works, or three if you include Mooney's original image on Instagram. The image on Instagarm was just that, something posted to elicit a smile or a comment from anyone who saw it. It had no real intrinsic 'market' value. It might have had some slight cachet amongst fans of Miss Mooney who has appeared on the SuicideGirls website (https://www.suicidegirls.com/ for the curious but it's not safe for workplace viewing), but barring her elevation to greater celebrity status, it is argued the original picture per se has no real ability to earn Miss Mooney any money. The argument then runs that Prince is such a sought-after artist that anything he does immediately turns his work into a "Work of Art" and this is evidenced by the fact his works hang on a Madison Avenue gallery wall and command these multi thousand dollar prices. Mooney's version of the Prince work, so the argument goes, is now operating in the same arena as his and since the level of transformation (that is, the extra comment) is insubstantial, the other Fair Use factors become determinative. These factors are:

From this, assuming that Prince's print qualifies for copyright due to it being transformative, Mooney's print falls down badly in respect of these other factors, in that the character of her use is the same as Prince's (that's the whole point of it), the nature of his and hers are the same ('work of art'), she has used the whole of his work and by under-cutting his price, her work would have a detrimental effect on the value of his.

That at least is the argument put forward by some. However it rather overlooks the fact that hers was the original work. There is clearly some debate to be had about whether or not she owns the copyright in the original photograph of her which was clearly taken by someone else, but let's assume copyright has been assigned to her. She therefore has the right to publish her own work in whatever form she chooses, and this right isn't limited by the fact that Prince has already entered that market with his own work. It's not as if he has been granted an exclusive licence to sell his image which excludes the owner of the original from which his work is derived, from also entering that market. And of course her entry into the same market does not undermine the value of his work for the simple reason that anyone who has a spare $90,000 and wants a Prince work, is not going to buy a 'Mooney' instead. It's a shame that this seems unlikely to go to court, because it would be fascinating to see how the US legal system would deal with this conundrum.

Mooney is not the only one to take on Prince at his own game. Someone else who had his picture appropriated was artist Sean Fader, who decided to send out a press release cheekily inviting people to come and view his work at an exhibition organised by Richard Prince.

Prince's work should be considered an infringing derivative work, in which case he holds no copyrights in the unauthorized derivative work, and the original author can do what she wants with it. The Second Circuit's transformative use test has gone too far, and these are the absurd things that happen as a result.

Most of the comment posts on this has been about copyright, I haven't come across anything on the issue of personality rights. The thought of seeing a huge blown up version of a 'selfie' (that was posted on Instagram & intended to amuse your friends,) on an art gallery wall wouldn't be pleasing to most people and this was without their permission? So how does personality rights affect this case?

I agree with Anonymous 14:30 that personality rights could affect this case. New York state provides for them under a statute,NY Civil Rights Law para. 50 and 51.

Also, First Amendment can be a defense, and an expressive use such as art may not be infringing.