E-books – state of the nation 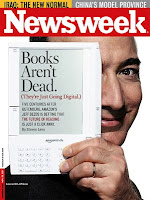 The 1709 Blog is is pleased to offer readers the thoughts of Sam Ross, who has been considering the current state of play regarding e-books. Says Sam:

"Although technology has historically boosted the paper-book industry with online ordering, used books being 'eBayed', and print-on demand technology, might bookshelves soon become firewood and books museum artefacts due to the rise of the e-book?

By the time copyright law was enacted in 1709, the printing press had been around for nearly 300 years. 300 years later in 2009, commentators are suggesting that the "iPod moment" for e-books is almost upon us. Amazon's Kindle DX (so far only released in the US) features a 9.7 inch screen, 3G Wi-Fi, a 16-shade display, a 3,500 book capacity, and -- crucially -- it has won praise from Oprah Winfrey. The Kindle DX is supposedly paving the way for a billion dollar e-book industry in the next few years (still not anything on Oprah's net worth, but not bad…).

In a generation that is addicted to free content, out-of-copyright "free-e-book" files (e.g. Dickens' Great Expectations) offered by Project Gutenberg have proved popular in past years, and there is now even an iPhone application, Stanza, for reading these files. However, in-copyright e-books have lagged way behind (just 30,000 Sony Reader devices had been sold in the UK as of January 2009 with only 75,000 e-books downloaded). Speculation is, however, that with exciting new devices like the Kindle DX in place, which offer better screen resolution, portability and design/feel, it is only a question of time until the e-book phenomenon grips the masses. The surprising catalyst could be the new hardware proving an unlikely saviour for the ailing newspaper industry (a subscription-based deal has already been struck in the US between Kindle and the Wall Street Journal, and Rupert Murdoch is keen for NewsCorp to get involved). But, if the hardware is equivalent to the iPod, do we have the mp3?

An e-book file's current advantage is simple: a great number of works can be stored on just one device, but is this "easy to carry" benefit enough to spawn a revolution in a similar way to the mp3 file? Probably not, because (i) a typical consumer will only carry around two or three books (compared to two or three thousand songs); and (ii) people have a sentimental attachment to books that they certainly did not have towards those pesky CDs. So, how will readers be won over?

Random House has tried to respond to this issue by tempting iPhone users with e-books featuring DVD-like extras such as quizzes, animation and videos. However, arguably what the hardware is really waiting for is a file type which intrinsically belongs on the device and appeals to young readers; not simply the same format supplemented by extras.

The e-book file of the future will, this blogger prophesies, be tailored for the "Twitter" generation and it will represent a new movement in fiction, featuring interactive plotlines; hyperlinks to other content; and user-generated submissions; all features that simply cannot exist on the printed page. Could the e-book file raise tricky copyright issues, such as both readers and authors both grappling for authorship, and multiple individual works subsisting in each evolving and expanding e-book? We will just have to wait and see ..."

Thanks, Sam, for your research and your observations. I suspect we won't have to wait very long to see what happens. The point about sentimental attachment is an interesting one: many children of the 1960s have a remarkable attachment to the vinyl that brought them the Beatles, Stones etc, and loving treasure their old LPs even they have no machinery to play them on, having long ago opted for cassette tapes, followed by CDs and now downloads. By this token, book-lovers will hoard their cherished paper products while (re)reading the text by e-book.
Posted by Jeremy at 9:10 am

As a book-lover, it´s amasing what e-books can do for you. I buy a lot of law-books from ebooks.com. What´s good is that you have your books available in office, at home and in meetings and court!! You just download the books to all your computers, including your laptop! Here you can rely on i.e Cambridge University Press and Edvard Elgar, but not Oxford University Press, yet.

The best is: you save your back!