[The IPKat] SUPER-BREAKING: (Liberal) CJEU says that linking to unauthorised content is NOT a communication to the public unless one seeks financial gain and has knowledge of illegality

This from  Eleonora on the IPKat: 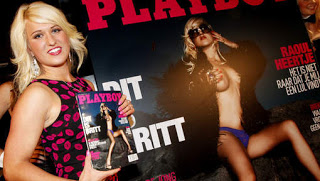 The day everybody had been waiting for - at least since 13 February 2014 [that, of course, was the date of the Svensson decision, on which see Katposts here] - has finally arrived.

This morning the Court of Justice of the European Union (CJEU) has issued its [fairly liberal] judgment in GS Media [not yet available on the Curia website, but here's the press release].

This was a reference for a preliminary ruling from the Dutch Supreme Court. It had been made in the context of proceedings between Sanoma (the publisher of Playboy magazine) and GS Media, concerning the publication by the latter on a website that it operates (GeenStijl.nl) of hyperlinks to other websites hosting unpublished photographs of Dutch starlet Britt Dekker. These photographs were due for publication in a forthcoming issue of Playboy.

More specifically, in 2011 [prior to the publication of the Playboy issue in question] GS Media published a report with the title ‘[obscenity] leaked! Nude photos ... Dekker’. The report also included part of one of the photographs in the top left-hand corner (‘the cutout’). The report ended with the following words: ‘And now the link with the pics you’ve been waiting for. Whoever [obscenity] first, [obscenity] first. HERE. ...’. By clicking on a hyperlink, indicated by ‘HERE’, readers were directed to an Australian data-storage website called Filefactory.com [where the photographs appeared to be freely accessible, although this was not entirely clear]. By clicking on the following hyperlink, they could open a new window which contained the button ‘DOWNLOAD NOW’. By clicking on the button, the readers opened a file in zip format containing 11 files in pdf format, each of which contained one of the photographs.

Despite Sanoma's demands, GS Media refused to remove the hyperlink in question (although the photographs were removed from the Filefactory.com website), and later on published two further reports with new hyperlinks to Dekker's photographs.

GS Media was successfully sued before the Amsterdam District Court and the Amsterdam Court of Appeal, although these courts considered different aspects. The former held that by posting those hyperlinks, GS Media’s conduct had been unlawful because it encouraged visitors to GeenStijl to view the photographs illegally posted on Filefactory.com which, without those hyperlinks, would not have been easy to find. In contrast, the Court of Appeal held that, on the one hand, GS Media had infringed copyright by posting a cut-out of one of the photographs on the GeenStijl website but, on the other hand, had not made the photographs available to the public by posting the hyperlinks on its website.

The decision of the Court of Appeal was appealed before the Supreme Court, which decided to stay the proceedings and seek guidance from the CJEU on whether the provision of a hyperlink to a work made available on a certain website without the initial consent of the relevant rightholder and where it is freely accessible is to be regarded as an act of communication to the public.

More specifically, the Dutch Supreme Court asked the CJEU whether:
The AG Opinion

In his Opinion on 7 April 2016 [here], Advocate General (AG) Wathelet held that the provision of a hyperlink to a work made available on a certain website without the initial consent of the relevant rightholder and where it is freely accessible is NOT be regarded as an act of communication to the public.

The AG recalled that in Svensson the CJEU held that for there to be an 'act of communication', it is sufficient, in particular, that a work is made available to a public in such a way that the persons forming that public may access it, irrespective of whether they avail themselves of that opportunity. According to the AG this approach is not correct in relation to hyperlinks, also because in FAPL [here] the CJEU held that without the intervention, for example, of a hotel to offer a television signal in its rooms via television sets, the work would not have been accessible to the hotel’s customers. It would follow that in order to establish an act of communication, the intervention of the ‘hyperlinker’ must be vital or indispensable in order to benefit from or enjoy works.

The AG also found that it is not important whether the person who posts on a website a hyperlink to another website on which copyright works are freely accessible to the public is or ought to be aware that the relevant rightholder has not authorised the initial communication.

More generally, the AG suggested that linking should not fall within the scope of copyright protection.

According to the official release:


“In today’s judgment, the Court declares that, in accordance with the directive concerned [the InfoSoc Directive], Member States are to provide authors with the exclusive right to authorise or prohibit any communication to the public of their works. At the same time, that directive seeks to maintain a fair balance between, on the one hand, the interests of copyright holders and related rights and, on the other, the protection of the interests and fundamental rights of users of protected objects, in particular their freedom of expression and of information, as well as the general interest.

The Court recalls its earlier case-law in accordance with which the concept of ‘communication to the public’ requires an individual assessment, which must take account of several complementary criteria. Those criteria include, first, the deliberate nature of the intervention. Thus, the user makes an act of communication when it intervenes, in full knowledge of the consequences of its action, in order to give access to a protected work to its customers. Secondly, the concept of the ‘public’ covers an indeterminate number of potential viewers and implies a fairly large number of people. Thirdly, the profit-making nature of a communication to the public is relevant.

The Court specifies that its earlier case-law concerned only the posting of hyperlinks to works that have been made freely available on another website with the consent of the rightholder, and that it cannot, therefore, be inferred from that case-law that the posting of such hyperlinks would be excluded, as a matter of principle, from the concept of ‘communication to the public’ when the works at issue have been published on the other website without the rightholder’s consent.

As regards that latter situation, the Court emphasises, however, that the internet is of particular importance to freedom of expression and of information and that hyperlinks contribute to its sound operation and to the exchange of opinions and information as well. In addition, it accepts that it may prove difficult, in particular for individuals who wish to post such links, to ascertain whether the works involved are protected and, if necessary, whether the copyright holders of those works have consented to their publication on the internet.

Having regard to those circumstances, the Court holds that, for the purposes of the individualised assessment of the existence of a ‘communication to the public’, it is necessary, when the posting of a hyperlink to a work freely available on another website is carried out by a person who, in so doing, does not pursue a profit, to take account of the fact that that person does not know and cannot reasonably know that that work had been published on the internet without the consent of the copyright holder. Indeed, such a person, does not, as a general rule, intervene in full knowledge of the consequences of his conduct in order to give customers access to a work illegally posted on the internet.

In contrast, where it is established that such a person knew or ought to have known that the hyperlink he posted provides access to a work illegally published, for example owing to the fact that he was notified thereof by the copyright holders, the provision of that link constitutes a ‘communication to the public’. The same applies if that link allows users to circumvent the restrictive measures taken by the site where the protected work is posted in order to restrict the public’s access to its own subscribers.

Furthermore, when hyperlinks are posted for profit, it may be expected that the person who posted such a link should carry out the checks necessary to ensure that the work concerned is not illegally published. Therefore, it must be presumed that that posting has been done with the full knowledge of the protected nature of the work and of the possible lack of the copyright holder’s consent to publication on the internet. In such circumstances, and in so far as that presumption is not rebutted, the act of posting a clickable link to a work illegally published on the internet constitutes a ‘communication to the public’.

In the present case it is undisputed that GS Media provided the hyperlinks to the files containing the photos for profit and that Sanoma had not authorised the publication of those photos on the internet. It appears from the facts, as stated in the Hoge Raad’s request for a preliminary ruling, that GS Media was aware of the illegal nature of that publication and that it cannot, therefore, rebut the presumption that it posted those links in full knowledge of the illegal nature of that publication. Subject to the checks to be made by the Hoge Raad, by posting those links, GS Media therefore effected a ‘communication to the public’.

While a more detailed analysis will be provided as soon as the judgment become available, don't forget the rapid response seminar that the IPKat is organising together with Bristows in the afternoon of 13 September!

Here's the programme:
The format will be that of an informal panel discussion, in which panelists and attendees alike will share their views.