Terminal blues for the record labels? 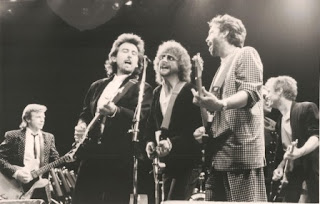 There has been a lot of excitement in cyberworld as the US press wakes up to the rather interesting idea that an ever growing list of major recording artistes and songwriters are looking to reclaim their copyrights from record labels and music publishers.

The New York Times focussed on a number of 1978 hit albums such as Bruce Springsteen’s “Darkness on the Edge of Town,” Billy Joel’s “52nd Street,” the Doobie Brothers’ “Minute by Minute,” Kenny Rogers’s “Gambler” and Funkadelic’s “One Nation Under a Groove” which of course have generated tens of millions of dollars in sales for record companies and music publishers alike. Why the story then? Well thanks to "a little-noted provision in United States copyright law, those artists — and thousands more — now have the right to reclaim ownership of their recordings, potentially leaving the labels and music publishers out in the cold". And the list nas grown and currently includes Bryan Adams, Bob Dylans, Tom Waites, Kris Kristofferson, Kool & The Gang, Fleetwood Mac and now Victor Willis, frontman and songwriter with the Village People (he was the naval officer!) who is seeking to regain control of over thirty of the band’s hits including Y.M.C.A, from two music publishing companies who are contesting the move.

The background to this is the revision to US copyright laws in the mid-1970s, when musicians and songwriters, like creators of other works of art, were granted “termination rights,” which allow them to regain control of their work after 35 years, so long as they apply at least two years in advance. Recordings from 1978 are the first to fall under the law, but in a matter of months, hits from 1979, like “The Long Run” by the Eagles and “Bad Girls” by Donna Summer, will be in the same situation — and then, as the calendar advances, every other master recording once it reaches the 35-year mark. But don't expect the music industry to just hand over the rights! The Recording Industry Association of America have issued a statement saying with General Counsel Stephen Marks saying "We believe the termination right doesn't apply to most sound recordings." The labels are preparing to argue that the albums they released were "works for hire," that musicians were effectively employees and the fruits of their labors always belonged to the companies saying We believe the termination right doesn’t apply to most sound recordings,” said Steven Marks, general counsel for the Recording Industry Association of America. As the record companies see it, the master recordings belong to them in perpetuity, rather than to the artists who wrote and recorded the songs, because, the labels argue, the records are “works for hire,” compilations created not by independent performers but by musicians who are, in essence, their employees.

You write: "As the record companies see it, the master recordings belong to them in perpetuity, rather than to the artists who wrote and recorded the songs, because, the labels argue, the records are 'works for hire,' compilations created not by independent performers but by musicians who are, in essence, their employees." Like the New York Times, you are missing the argument. There are two categories of works that qualify as works for hire under the Copyright Act: (1) works created by employees in the scope of their employment; and (2) specially commissioned or ordered works prepared by independent contractors provided that the works fall within one of nine statutory categories (including "a work prepared as a contribution to a collective work") and further provided that the independent contractor and commissioning entity agree in writing that the work shall be considered a work for hire.

Your analysis conflates these categories. To be sure, the record companies may claim that some contributions to recordings fall into category 1 -- contributions by actual employees of the record companies in the traditional sense, which may include producers, engineers, and perhaps even session musicians. But their main argument -- and likely their only argument with respect to artists such as Bruce Springsteen -- regards category 2. Specifically, their argument is that the artists' recorded performances are contributions to "collective works" -- the collective works being either the individual songs, or, more likely the albums -- that are specially commissioned or ordered by the record companies and are works for hire subject to the parties' recording contracts.

So it is not correct to characterize the record companies' argument as saying that the musicians are "essentially their employees" or "in essence their employees." And the NY Times is incorrect to suggest that the issue will turn on "agency" principles. Rather, the work for hire status of most sound recordings will depend on whether the recording contract contains work for hire language (and most do), and whether an artist's contribution of a performance to a recorded song and/or an artist's contribution of a recorded song to an album qualifies as a "contribution to a collective work."