What is the case about?


Ben and Ray Lai are two brothers who own Horizon Comics Productions and created the comic book series Radix in 2001. Only a few books were published in 2001 and 2002.


Marvel created the Avengers series, of which Iron Man is one of the superheroes. The character gets his superpowers from a powered armored suit.


Uh-oh, two power suits (not the eighties type with the big shoulder pads, the armored and weaponized type).
Marvel’s Iron Man character first appeared in 1963, but he did not have armor then. Plaintiffs alleged that he first wore a “spandex-like attire and minimal armor” and then wore a “fully mechanized suit of body armor” in the Marvel movies, and that this change occurred after Plaintiffs had submitted the Radix art to Defendants and were hired by Marvel as freelance artists.


Marvel had moved to dismiss claiming that elements of Plaintiff’s works which had allegedly been copied were not protectable as a matter of law and were not, in any event, substantially similar to Defendants’ works. In March 2017, Judge Paul Oetken granted the motion as to the armored suit’s claim, but allowed the complaint about the promotional posters to move forward.


Defendant recently filed a memorandum of law in support of its motion for summary judgment.


Parties in a copyright infringement suit sometimes struggle to prove how a particular work has been created. However, it is essential to be able to prove that the allegedly infringing work has been independently created. This is why Marvel’s memorandum of law is particularly interesting to read. 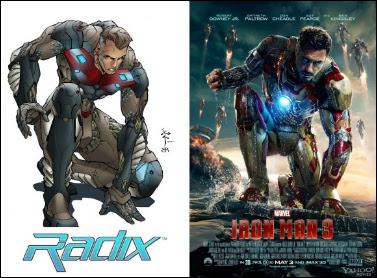 
A plaintiff claiming copyright infringement must show that the defendant copied his work. If there is no direct evidence of actual copying, he must show access and probative similarity.


Marvel claims that that it hadn’t access to the Caliban Drawing. Plaintiffs claim that Ray Lai had provided his business card to several persons which listed a web site address where the Caliban Drawing could be found, and that the drawing was hung on a wall at a comic book convention in 2001.


Marvel denied it had access, as there was no evidence that anyone involved in the creation of the Iron Man 3 poster was at the comic book convention where the drawing was allegedly featured. They further argued that the mere fact that the drawing was allegedly   featured on Plaintiff’s website is not sufficient evidence, as “the existence of the plaintiff’s copyrighted materials on the Internet, even on a public and ‘user-friendly’ site, cannot by itself justify an inference that defendant accessed those materials.” Defendant noted that Plaintiff’s website had ceased to operate in 2003, which made it improbable that anyone involved in the making of the poster, even if they had indeed visited the site, would have saved a copy of the Caliban Drawing found on the site and then used it years later to create the Iron Man 3 promotional poster.


If Plaintiff is not able to prove access, then probative similarities are not sufficient to prove copying. Instead, plaintiff must prove that the two works are “strikingly similar,” which means that “two works are so nearly alike that the only reasonable explanation for such a great degree of similarity is that the latter was copied from the first.”


It is Marvel’s description of the independent creation of the Iron Man 3 Poster which is particularly interesting to read.


Even if a plaintiff provides evidence supporting a prima facie case of infringement, defendant can still prevail if can prove that he independently created the work.


Disney and Marvel had retained the service of a third party to create the poster. He testified he had never see the Caliban Drawing, but described his creative process.


He reviewed the Iron Man 3 script then developed inspiration boards using images from prior Iron Man movies and comics. He and his team then made black and white sketches, which were used as an inspiration for RDJ during a photo shoot.


Hundreds of photos were taken during the shoot. One of them shows the actor in the pose which was later chosen for the Iron Man 3 promotional poster. RDJ is shown looking down at the black and white sketches while posing.


Defendant was thus able to establish a chain of inspiration: inspiration board drawings of former Iron Man movies and comics, which inspire sketches, which in turn inspire the RDJ pose, which is then replicated in the poster.  Defendants claim this a “straightforward development process.”


Defendants further explained that before the poster was finalized, the creative team had provided Marvel with “callout” documents “identifying, by source and serial number, every photographic and artistic element depicted in the Iron Man 3 poster, so that Marvel Studios’ legal team could “clear” any license rights needed for those materials.” Defendants argued that “the photos used for Iron Man’s head, shoulders, arms and fist” were all taken during the RDJ shoot.


Defendant concludes by stating that “[t]he claim that they would copy a drawing made some 10 years earlier by unknown artists, to promote an unheard-of comic book, depicting an anonymous character wearing a generic armored suit in a stock fighting pose is, candidly, ludicrous.” [Ouch].