The COPYKAT - winds of change


In keeping with the wet and windy weather here in the UK, today's CopyKat considers "stormy" and controversial copyright reform on both sides of the Atlantic, a lightning bolt victory for movie studios to the tune of $25 million in damages, and a picture of a thundercloud.

But first, in case you missed it, our very own Eleanora Rosati has been quoted by CNN for an article entitled Europe just approved new copyright rules that could change the internet. The article provides a brief overview of the more controversial aspects of the new Copyright Directive, and is certainly worth a read. Staying on the topic of the European Copyright Directive...

Axel Voss and the new Copyright Directive: deceived or indifferent?

By now, many CopyKat readers will be aware that the recently approved Copyright Directive includes several controversial provisions, including the so-called “link tax” at Article 11 and the “upload filter” at Article 13. But an interview published by Breakit suggests that even members of the European Parliament’s Committee on Legal Affairs (JURI) may not have even actually known what they voted “yes” to.

Emanuel Karlsten is a Swedish journalist who recently interviewed the EU's Copyright rapporteur Axel Voss. As explained by the EU Parliament fact page, the rapporteur is an instrumental person in the legislative process. Prior to becoming an MEP Voss was a lawyer himself, and has been a key figure in drafting the new Copyright Directive. As rapporteur, he has been crucial in carrying the Copyright Directive through to a successful vote earlier this month.

Karlsten put it to Voss that, as per the Directive, "not even an individual can film a game of soccer or a horse riding competition". Voss replied that “the part about sports events had slipped through without anyone noticing” which "was kind of a mistake, I think, by JURI. Someone amended this, nobody has been aware of this. I didn't know that this was in the proposal so far, so I have to deal with it now."

In his defence, Voss explained “because of the time pressure” and focus on more publicized aspects of the law such as Articles 11 and 13 mentioned above, the measure mentioned by Karlsten may have been “insufficiently scrutinized.” When interviewed by Quartz about his conversation with Voss, Karlsten stated that “Voss’s surprise about the sport filming provision is indicative of a much larger problem. It exceeded my worst fears about the competence of the MEPs handling of this directive.”

Attempts to update copyright law in the United States inch ever closer to being enacted into law. With midterm elections just weeks away, there was some doubt for a moment that the Music Modernization Act would even pass during this current Congress. However, the Senate majority leader Mitch McConnell (Republican, from Kentucky) brought it to a vote on 18 September, where it passed unanimously.

American public broadcaster NPR astutely noted that “in an age where political and artistic consensus is increasingly found only in cultural warrens populated by the like-minded, the bipartisan support of the bill is perhaps a small beacon of unity.”

Now that it has passed the upper house of the American legislature, the bill has been renamed the Orrin G. Hatch Music Modernization Act, after Sen. Orrin Hatch (Republican, from Utah). Hatch is retiring from government and, in addition to being a strong advocate for the act, also happens to own a platinum record (as an aside, you can see Hatch - and several other politicians - on the Dallas Observer’s page entitled The Most Entertaining Musical Performances by Politicians).

As for next steps, the MMA must now go to the lower house for approval. Once the language is reconciled with the version approved by the House of Representatives, the bill will advance to the President for signature into law.

In the CopyKat’s opinion, one of the best press releases about this entire process comes from Mitch Glazier, the president of the Recording Industry Association of America (RIAA): “As legendary band the Grateful Dead once said in an iconic pre-1972 song, ‘what a long strange trip it’s been.’ It’s been an epic odyssey, and we’re thrilled to almost be at our destination.”

But if we’ve learned anything from the Copyright Directive reforms in Europe, it’s certainly that “the devil is in the details” when it comes to legislation such as this.

The Alliance for Creativity in Entertainment (ACE), an industry coalition of global entertainment companies and film studios, together with Netflix and Amazon, has secured a major legal victory against Tickbox, a type of so-called “Kodi Box” streaming device. As a result of the judgement and permanent injunction, which were handed down in Los Angeles, California on September 11th, Tickbox will pay $25m (£19m) in damages. Additionally, Tickbox will no longer provide software that allows users to access pirated content, and agrees to disable any such software within 24 hours.
In its coverage of the matter, Variety noted that in initial advertising, Tickbox promised customers that they could get “virtually the channels you get from your local cable company … without you having to worry about paying rental fees or monthly subscriptions.” Tickbox devices retailed for about $150 (£115).

In October of last year, ACE originally filed a lawsuit alleging that TickBox was promoting their streaming device as “a tool for mass infringement of copyrighted motion pictures and television shows”. By this point, TickBox had changed the advertising wording, and in its defence to the lawsuit attempted to feign innocence by “claiming that the device manufacturer could hardly be held accountable for what their customers chose to download” (nocable.org). Essentially, Tickbox’s fundamental argument was that it is merely a hardware company, and therefore no more responsible for copyright infringement than any other computer manufacturer.

Judge Fitzgerald disagreed with TickBox’s reasoning, explaining that “There is sufficient evidence that the Device can be and is used to access infringing content, and there is sufficient evidence of TickBox’s fault — primarily in the form of its advertisements and customer-support efforts. TickBox may be held responsible for the instances of infringement that would not have otherwise occurred in the absence of the Device.”

This successful action against TickBox is the first brought on by ACE that targeted a streaming device. Other similar “Kodi-Box” lawsuits remain pending, and the outcomes are likely to be similar now that this one against TickBox is on the books.

Worth noting is that one of Tickbox’s competitors, Dragon Box, was also sued earlier this year by Netflix, Amazon, and others for copyright infringement. Dragon Box then released the following statement: Instead of closing our doors and shutting down all boxes and riding off into the sunset we decided that it was in the best interest of you the customers and the company to change our business model and adapt to change and continue to try and bring you the best legal content we can and add in as many services we can to make Dragon Box the box that beats any competitors out there.

Although Netflix may have secured a victory against TickBox in the story mentioned above, that’s not to say that Netflix itself is free from blame when it comes to alleged copyright infringement.

Netflix has received widespread acclaim for its retro science fiction series, Stranger Things. As noted by GeekWire, “creepy storm clouds looming over the fictional town of Hawkins, Indiana are a regular occurrence” on the show, but one particular cloud is alleged to look a bit too similar to a supercell captured by Montana-based professional photographer Sean Heavey. In his lawsuit filed in Montana last week, Heavey argues that Netflix took The Mothership photograph and used it without permission in Stranger Things.

In 2010, Heavey took a photograph of a thunderstorm that he called "The Mothership." The image appeared in publications and online all over the world, including in an Apple advertisement, Random House, Time, USA Today, National Geographic, The Daily Mail, National Public Radio, and The Nature Conservancy. Unfortunately, it’s also been the subject of continuous copyright battles.

He asserts that this was by no means a simple cloud photo: instead, “Sean captured The Mothership using great technical skill and careful timing, as well as significant time and energy.” The lawsuit explains that Heavey tracked and followed the storm for many hours, beginning as it crossed the Montana/Canada border, and later “used his technical expertise to digitally combine separate panoramic photographs. The Mothership was the end result of “numerous sequences of experimentation with various framing, exposure, shutter speed, and movement options.”


In an earlier letter to Heavey, one of Netflix’s attorneys, Jarin Jackson stated that "The only similarity that exists between the Artwork and Mr. Heavey’s photograph, The Mothership, is the use of similar cloud formations. Copyright law, however, does not protect objects as they appear in nature."


Finally, an update! Cadillac's hopes to avoid trial are "smashed"

Back in February, the CopyKat wrote about SMASH 137, a graffiti artist who sued General Motors for featuring his work in a Cadillac advert without his consent. With thanks to the entertainment law team over at the Hollywood Reporter, Esq, we now know that the matter is likely heading to trial, as General Motors failed to convince the judge to award a summary judgment.

We also now have some new interesting case law in terms of whether or not graffiti on buildings forms “part” of a building’s architecture. This is an important question from a copyright perspective, as it can influence whether or not graffiti can be considered “background scenery” in commercial advertisements, and used without a licence from the artist. 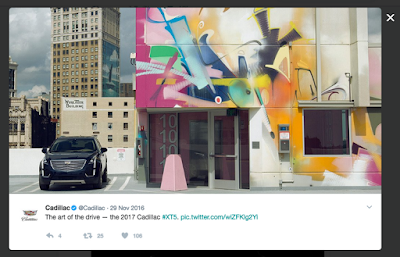 Swiss-based contemporary artist Adrian Falkner, known by his art world pseudonym “SMASH 137,” has had his work displayed around the world in various museums and galleries. In 2014, SMASH 137 participated in an art project called the “Z Garage” in Detroit, Michigan. Two years later, General Motors (GM) developed and launched an international media campaign to promote its new Cadillac XT5. In several still-image advertisements, Cadillac featured SMASH 137’s Z Garage mural as the centrepiece artistic element. In his lawsuit filed in January 2018 in California, SMASH 137 sought damages because his mural was used in the advertisements without his knowledge or consent.

According to the judgement, there is “no indication that the mural was designed to appear as ‘part of’ the building or to serve a functional purpose that was related to the building. Instead, there is undisputed evidence that SMASH 137 was afforded complete creative freedom with respect to the mural, and that the design of the mural was inspired by SMASH 137’s prior work.”

Disagreeing with GM’s claim that there was somehow an architectural connection between the mural and the parking garage (you can’t blame the lawyers for trying!) Judge Wilson stated that he "cannot hold as a matter of law that the mural is part of an architectural work" and accordingly, cannot grant the automaker's motion that it is permitted to photograph the mural. Speaking to the Detroit Free Press, Falkner’s attorney Jeff Gluck said the judgement was “a massive victory for artists’ rights.”

Fortunately for GM however, Judge WIlson did agree with their point that copyright precludes an award of punitive damages. If the case proceeds to trial and SMASH 137 prevails, he is only entitled to recover statutory damages, which are capped at $150,000 (£115,000) for willful infringement, or actual damages.