Plaintiffs are Jason Williams, known as Revok, Victor Chapa, known as Reyes, and Jeffrey Rubin, known as Steel. They are graffiti artists who had been invited in 2012 by a San Francisco property owner to create a mural in San Francisco’s Mission District (the “Mural”). Revok and Steel painted their signatures, over a background of “revolutions” imagery which is Chapa’s signature style (CD California p. 1 & 2). 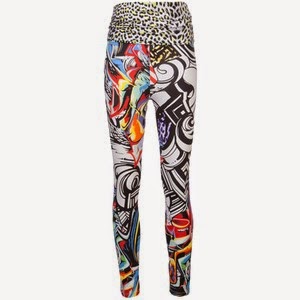 Defendant is Roberto Cavalli, an Italian fashion company known for its colorful prints.  It produces and markets a lower-priced brand called Just Cavalli, which introduced in March 2014 a capsule line of clothing and accessories decorated with graffiti art (the “Graffiti Collection”). Revok, Reyes and Steel claimed that the line reproduced without authorization elements of the Mural, using high-resolution photography. They asked Defendant to stop selling the Graffiti Collection, but Defendant did not comply. One of the reasons for not complying was apparently that Italians are on vacation in August [this is known as the dolce vita demurrer in some legal circles] (amended complaint at 34).

Plaintiffs then filed a copyright and trademark suit against Cavalli, the company producing the goods, and retailers selling the line, such as Amazon and Nordstrom. Defendant moved for summary judgment, which was denied by the CD California.  As this is a copyright law blog, I will only comment about copyright infringement.

Revok and Steel had  used their respective signatures as part of the design, and claimed that Defendant made them indiscernible and superimposed the Just Cavalli name over Chapa’s imagery, even adding sometimes its own signature, thus giving the impression that Roberto Cavalli created these designs. Plaintiffs considered this to be “a defacement” and also “a false representation that {Roberto Cavalli] rather than Plaintiffs was the creator” (amended complaint at 32). However, they did not claim that Defendant had thus violated the Visual Artists Rights Act of 1990 (VARA).

However, VARA is not always successfully used by graffiti artists in a court of law. In 2013, New York City graffiti artists claimed in the Eastern District of New York (EDNY) that a realtor about to destroy the 5Pointz buildings in Queens, on which they had painted several of their works, would thus violate VARA, as destroying their work would be prejudicial to their honor and reputation. But Judge Block from the EDNY was not convinced, noting that Plaintiffs knew that the  buildings were intended to be demolished, and that they therefore had “created their own hardships” when painting on a support they knew was doomed (the case is Cohen v. G&M Realty LP).

In our case, the possible VARA issue was not the destruction of the support, but the alteration of the signature, which could possibly prevent the artists to claim authorship of the Mural. However, Plaintiffs chose not to argue that Defendant violated their rights under VARA.

For the Plaintiffs, Defendant intentionally removed this information “with the intent to induce, enable, facilitate, or conceal an infringement of Plaintiff’s right under the [Copyright] Act“ and, in some pieces of the Graffiti Collection, even “replaced such information with false, altered and inaccurate copyright management information” (amended complaint at 49).

Defendant argued that section 1202 does not protect signatures. However, as it did not cite any authority for that proposition, this argument failed to convince the court, noting that “a signature seems to be the exact type of information that would identity the author of a work” and, as such, are within the scope of  § 1202(c)(2).

Defendant also argued that, as § 1202 was enacted as part of the Digital Millennium Copyright Act (DMCA), some technological process must be used to place or remove the signature, and that it was not the case here. However, the court cited several cases from courts belonging to the Ninth Circuit which had found signatures not in digital form to be CMIs. Therefore, the CD California denied Defendant’s motion to dismiss Plaintiff’s cause of action for violation of § 1202 of the Copyright Act. The suit will now proceed.
Posted by Marie-Andree Weiss at 11:10 am