Are Languages Created by One Single Homo sapiens Protected by Copyright?

You may remember that Paramount Pictures and CBS Studios are suing Axanar Productions and its principal Alec Peters over the short movie Prelude to Axanar (see here and here). Plaintiff claims the movie is an unauthorized derivative work, and that it infringes their copyright in Star Trek. Plaintiff filed an amended complaint last month, which details further what they consider to be infringement.


The complaint alleges that one of the infringing elements of Prelude to Axanar is the character of Garth of Izar, the legendary Starfleet captain who won the battle of Axanar, and later became insane, as shown in one of the original Star Trek episodes, Whom Gods Destroy. The Complaint also alleges infringement in the characters of Soral, a Vulcan ambassador, Starfleet captain Richard Robau, and historian John Gill.


Plaintiffs also claim copyright infringement in the Klingon race (a “warrior race”) and their appearance, and in the Vulcans, which “are a humanoid race with pointy ears from the planet Vulcan that are responsible in a large part for the founding of the Federation” and their appearance. Plaintiffs also claim copyright infringement in the Andorians, the Tellarites, and the Romulans, the last a species from the planets Romulus and Remus.


Plaintiffs also claim copyright in the costumes worn by the Enterprise crew, the Vulcan robes, the cowl neck and Starfleet command insignia, and triangular medals on uniform. If a court would recognize such infringements, it would set a precedent for fashion designers to claim copyright in their own works. However, this is highly unlikely, and claiming copyright in a cowl neck, especially, takes gumption, to say the least.


Can an Invented Language be Protected by Copyright?


The list of the claims goes on, and it is an interesting read. I would like to concentrate in this post on the claim in the Klingon Language, “Klingonese or Klingon, the native language of Qo’noS” (p.31). Can an invented language be protected by copyright?


I read online this interesting post by Cory Doctorow about the issue, wich provides links to other interesting articles on the Klingon language. Cory Doctorow does not believe it can be protected by copyright. I learned reading the post and its linked articles that the Klingon language was created by linguist Marc Okrand, and is a combination of Hindi, Arabic, Yiddish, Turkish, and Mohawk. It has its own dictionary. 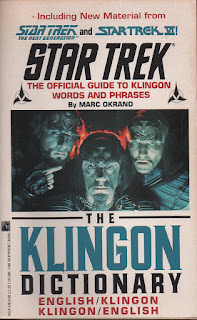 There is no doubt that a natural language cannot be protected by copyright. A language is a combination of signs, which have meanings, and the language is organized using a syntax. Natural language evolve over time, and are created by member of particular tribes of the human species, following an organic process. As such, natural languages can be described as “procedure, process, system, method of operation, concept, principle, or discovery” which are not protected by copyright (§ 102. 2 of the Copyright Act).


But what about a language which is “created”? Cory Doctorow argues that the Klingon language “admittedly borrows phonemes from Hindi, Arabic, Tlingit, and Yiddish and grammar from Japanese, Turkish, and Mohawk” which makes claiming a copyright in it dubious.


However, the Supreme Court explained in 1879, in its Trade-Marks case, that “[t]he writings which are to be protected [by copyright] are the fruits of intellectual labor, embodied in the form of books, prints, engravings, and the like.” That does not mean that mere “sweat of the brow” is enough to claim protection of a compilation by copyright, as explained by the Supreme Court in Feist Publications, Inc. v. Rural Telephone Service Co. The Supreme Court ruled in this case that a compilation of facts may be protected by copyright only if such selection, coordination and arrangement is original enough. However, a modicum of originally suffices.


Is the Klingon Language an Original Compilation of Facts?


“Factual compilations… may possess the requisite originality. The compilation author typically chooses which facts to include, in what order to place them, and how to arrange the collected data so that they may be used effectively by readers. These choices as to selection and arrangement, so long as they are made independently by the compiler and entail a minimal degree of creativity, are sufficiently original that Congress may protect such compilations through the copyright laws” (Feist at 348).


In our case, it could be argued that Marc Okrand compiled facts, the natural languages, and decided in which order to place them, and how to arrange them. This work certainly entailed a minimal degree of creativity. I would say that the Klingon language may be protected by copyright. 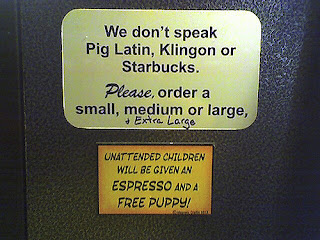 Klingon is Not the Only Original Language Ever Created


The issue of whether a language which has been created is protected is topical: the television series “Game of Thrones” features its own language, the Valyrian, which was created by David Peterson and has even a high and a low level of language (hear them here). David Peterson wrote a book named “The Art of Language Invention” (he speaks about it here) and has created several other languages for the movie industry.


Mark Okrand himself has been asked if the Klingon language is protected by copyright and he answered that he does not own the copyright, as he created it as a work for hire, but that he is not sure if Paramount owns it either. And you, what do you think?


Picture of the Klingon Dictionary courtesy of Flickr user geraldford under a CC BY-SA 2.0 license.


Picture of Sign courtesy of Flickr user Aaron Gustafson under a CC BY-SA 2.0 license.
Posted by Marie-Andree Weiss at 1:34 pm