If you want to know what the copyright law is, there are treaties, statutes, decided cases, learned books and literally reams of guidance from copyright collecting societies and representatives of rights owners. You can read them and get a good idea of what's allowed, what's not, and what's exercising the minds of policymakers, legislators and economists. However, if you want to know how people actually operate within the law, then books written by and for information managers will give you a far clearer picture.
One such book is Copyright: Interpreting the law for libraries, archives and information services, the 5th edition of Graham Cornish's bible (this word is carefully chosen). There are far more information managers, archivists and librarians in the world than there are copyright lawyers, and the point at which legal norms meet professional ethos is the point at which the typical reader of this work will quietly and unassumingly make the system work -- for authors, publishers and readers alike. According to the web-blurb of publishers Facet:

"Cornish's Copyright, which has become a standard work in its field, explains the provisions of the UK Copyright Act and supporting legislation in quick and easy question-and-answer form.

This latest edition is revised and expanded in the light of new legislation and some decisions by the courts which have changed our understanding of what the law means. There is also expanded coverage of moral rights and the text has been expanded by the use of practical examples to illustrate complex points. Areas such as originality, databases, and the use of broadcast material in education all receive additional attention. And of course Wikipedia, Flickr, MySpace, Yahoo, Creative Commons and Open Archives are considered in a copyright context ...". 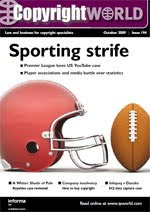 Meanwhile the most recent issue of Informa's Copyright World (October 2009) has just been released (you can see its contents list on its home page here). The cover story depicts a feature by William D. Schultz and Aaron M. Johnson (Merchant & Gould) on the present state of play regarding the US case law on sports statistics. The taster for this article reads thus:

"Every Sunday during the NFL season, millions of fans log on to their computers and are instantly transformed into owners of teams with names like Double Deuce, Just Johnson, and Dos Moss. Randy or Santana Moss, Chris or Calvin Johnson, and Deuce McAllister (all current or former NFL stars) do not get paid for their performance on these teams, but to their owners, the statistics and player information are priceless".

If you want to read more, you'd better subscribe or borrow a copy. If you don't want to read more, you're probably an insular American with a low tolerance of that nation's passion for sports stats and/or a hatred of anything that reminds you of sui generis database right in the EU.
Posted by Jeremy at 8:30 pm