As "digital theft" grows, can the content empire strike back? 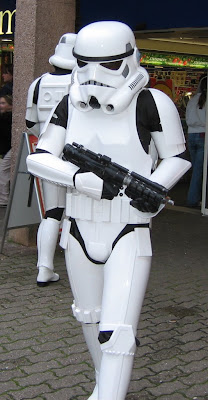 A new survey in the US commissioned by NBC Universal shows that 23.8% of global Internet traffic involves "digital theft," with the BitTorrent file-sharing protocol accounting for 11.4% of this figure. Brand and trademark monitoring firm Envisional's analysis of the top 10,000 peer-to-peer swarms found that 99.24% of non-pornographic material being traded was copyrighted material. It also found that "infringing cyberlocker sites" accounted for 5.1% of global Internet traffic, while "infringing video streaming sites" made up 1.4% of global traffic.

With that statistic in mind, it still seems surprising to this writer that nearly 100,000 North Americans have been sued for suspected copyright infringement on file-sharing networks over the past twelve months according to details of a study published by TorrentFreak. Again, the majority are alleged to have utilised BitTorrent, although some users of eDonkey were also targeted. The 99,924 defendants were sued as part of a total of just 80 lawsuits, which seek the identities of the many "John Doe" defendants from their various Internet service providers. Some 70,914 case are active and the porn industry is now having to take steps to protect its hitherto much admired internet economic model - nearly all of the recently-filed cases target alleged downloaders of adult content although the mainstream movie industry is actively represented too, against users who have illegally downloaded feature films such as "The Hurt Locker"

Torrentfreak say “through these mass lawsuits the copyright holders are trying to obtain the personal details of (mostly) BitTorrent users who allegedly shared their material online. Once this information is handed over, they then offer the defendant the opportunity to settle the case for a few hundred up to a couple of thousand dollars, thereby avoiding a full trial and potentially even bigger financial penalties”. I find myself reminded of comments from my blog on ACS:law last week (25th January) when Torrentfreak comments “One of the main points of critique is that the copyright holders have no intention of going to a full trial against each of the defendants. They are out to get a settlement, which means that the (possibly weak) evidence will never be tested in court. Two weeks ago the EFF filed an amicus brief in which it asked an Illinois judge to quash subpoenas issued in pay-up-or-else lawsuits involving alleged illegal file-sharing of pornography, with EFF Intellectual Property Director Corynne McSherry saying “Copyright owners have a right to protect their works, but they can’t use shoddy and unfair tactics to do so,” adding “We’re asking the court to protect the rights of each and every defendant, instead of allowing these copyright trolls to game the system.”

It also appears that Google has responded pressure from the entertainment industries by implementing active censors for “piracy related” terms including BitTorrent, torrent, utorrent, RapidShare and Megaupload from its instant and autocomplete services. BitTorrent Inc., RapidShare and Vodo have all spoken out against “commercial censorship”. Among the list of forbidden keywords are “uTorrent” and “BitTorrent” and these keywords will no longer be suggested by Google when the first letter is entered, nor will they show up in Google Instant and all combinations of the word “torrent”


http://torrentfreak.com/google-starts-censoring-bittorrent-rapidshare-and-more-110126/
Posted by Ben at 10:12 am