Puneet Kishor has put together “Copyright Treaties With the US,” a wonderful map viz that gives an interactive picture of the major international copyright treaties.  The map features a list of 17 options ranging from “Show all” to “None” and including five incarnations of Berne, several WIPO treaties, and of course the WTO TRIPs agreement.

Clicking on a treaty option brings up an array of blue circles across the map.  Each circle represents a country or territory that matches the chosen option.  Users can get more information by clicking on the circles.  Here’s a screen shot of the “Unclear” option for an example. 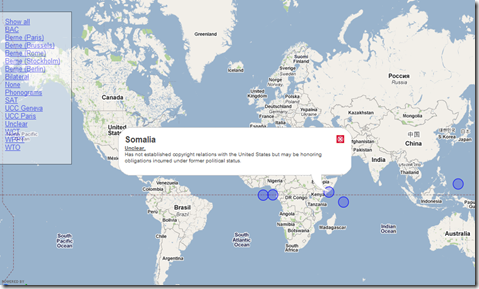 Since the map is designed to show treaty relations with the United States, the United States does not get a clickable circle on any of the options.  As Puneet explained, “The US can’t have a treaty with itself.”

Puneet developed the map to meet his own needs while doing research on different copyright regimes and the concept of an “international copyright.”  He had located the information he needed in Circular 38a, but found it’s pdf format less than ideal.  The interactive map was born.

Recognizing the huge potential of usefulness to others, he’s made the map available via his website under CC0, waiving his rights in the work.  As someone who’s tried to make a similar map in the past with Paint and color coding, I know I’ll be referring to this new resource often.