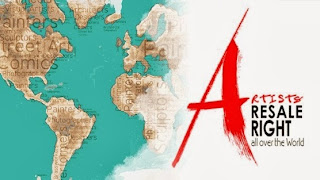 A few days ago Argentinean 1709 Blog friend Luciano Marchione informed this blogger of the launch of an online petition to demand that the Artist’s Resale Right (ARR, or droit de suite) is recognised as a “global right”.

Since the Artist's Resale Right is quite a difficult specialist topic in the realm of copyright, the 1709 Blog asked droit de suite expert, barrister and University of Glasgow lecturer Philippa Malas to explain to us a bit more about current law on ARR and the background to this campaign.

"The Artist’s Resale Right continues to divide opinion. Readers might recall that the right (a copyright) was harmonised in the EU under EC Directive 2001/84 on the resale right for the benefit of the author of an original work of art and was implemented in the UK under the Artist’s Resale Right Regulations 2006 (as amended). It has proved controversial, especially in the UK as the primary location for art market transactions within the EU (and third globally). A number of art market professionals remain staunchly against the right which they view as imposing additional administrative costs and legal burden on their businesses.

Under ARR a living artist (or estate of an artist up to 70 years after their death) can claim a royalty on the resale of a work following its first transfer. The royalty is calculated on a cumulative percentage basis as long as the work sells for at least €1000 or the equivalent. The total royalty payable on any sale cannot exceed €12,500. Artists nominate a collecting society that reconciles payments from dealers and auction houses. In the UK, DACS and ACS operate collecting societies. Liability to collect and pay the royalty rests with the transacting parties and not the collecting societies.

Last month, the European Visual Artists (EVA) launched an online petition to demand that the Artist’s Resale Right is recognised as an international right under the auspices of WIPO. EVA is an entity based in Brussels and represents the interests of visual arts collecting societies including: DACS for the UK and ADAGP in France. The online petition appears to be an initiative proposed by EVA, CISAC (France) and GESAC (Brussels). Suffice to say, and fiercely resisting the temptation to draw allusions to The Thick of It, these entities are lobbying bodies.

In addition to EU law, the droit de suite is enshrined under the Berne Convention (signatories to the Union are given here) and currently Article 14ter. It remains however, an optional right after some members of the Union (including the UK) objected to its inclusion the late 1940s. The UK abstained from including the right under its national legislation until the European directive imposed it. Under the Convention, it remains an optional right and is subject to the principal of reciprocity: the right can only be enjoyed if it is provided for in a member’s legislation. An artist in whose country the right does not exist cannot claim it. This principle is reflected in the European legislation under Article 7 of resale right Directive. Prior to the 2011 amending regulations, the UK Artist’s Resale Right Regulations listed the countries with which the reciprocal agreement exists.  At present, those countries are not listed, leaving room for ambiguity.
It is an interesting moment for EVA and its partners to set up the petition.

In 2012, a federal district judge controversially determined California’s resale right unconstitutional on the basis that it attempted to control commerce outside California [see here]. Such control was the remit of federal power. The application to dismiss the class action was brought by auction houses Christie’s and Sotheby’s. Under Civil Code section 986 (California Resale Royalty Act) artists are able to claim a royalty similar to the European right. It is not a right recognised throughout the United States. The Californian Act recognises the international nature of the art market and the provisions extend to resales by a Californian resident even where the sale is not made in within the state. The case is on appeal.

The EVA’s desire to achieve a ‘global right’ under WIPO could well be hindered if the US appellate court upholds the trial court’s decision. The Californian right is a beacon for those wanting to demonstrate that the European right is echoed by other international provisions."
Posted by Eleonora Rosati at 6:21 pm