Who needs copyright if you've got catapults?

Here's a media release that I received today from the UK' government's Department of Business, Innovation and Skills (no link, since I couldn't get it to work):

Adele, One Direction, Coldplay, Florence + the Machine, Ed Sheeran, Mumford and Sons and Arctic Monkeys are just some of the world-beating UK artists who in recent years have helped to accelerate export sales of British music to over 13% of the global market – the largest share apart from the US [so that's why the UK government has retained its interest in the Arctic, whose indigenous Monkeys presumably generate more revenue than their American cousins].

The [Music Export Growth] scheme will build on this British success story by supporting independent labels as they seek to catapult artists that are export-ready into overseas markets and has already prompted huge interest from within the independent music community since it was announced. 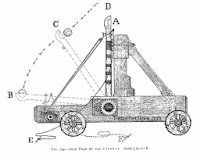 The Music Export Growth Scheme, funded by UKTI, the government organisation that supports UK business overseas, and run by BPI, the trade body that represents British recorded music businesses, will make available grants ranging from £5,000 to 50,000 to independent music companies to help them market British music overseas. The scheme is primarily targeted at artists who have achieved reasonable levels of success in the UK but are now looking to break through internationally.

Application Forms are now available from BPI’s website www.bpi.co.uk [I've just been there but haven't yet been able to find the form. Is it me ...? I only wanted to know what the form said about copyright and performers' rights]. The deadline for the first wave of applications is 18th November 2013.

Applications which are successfully shortlisted will then be reviewed by a panel of music industry experts, chaired by John Kennedy OBE, with marketing expertise from organisations including the Music Managers Forum (MMF) and the Association of Independent Music (AIM) as well as representatives of independent record labels, BPI and UKTI.

The first grants will be awarded by the end of December 2013. Further application rounds will take place periodically over the next three years, with the next one planned for Spring 2014 ...".

This all looks promising and I wish it well, but I can't help feeling that there's something missing from all of this.  It's a nine-letter word beginning with 'C' and it's not 'catapults'. Are we retreating from the glory days of copyright to an era of public sector patronage??
Posted by Jeremy at 4:09 pm

Now available on BPI site under the Export Growth tab