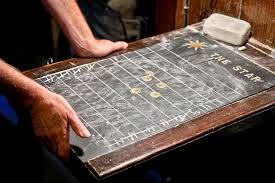 This blogger has always taken an interest in the compensation of authors for notional loss of sales inflicted upon them through the borrowing of their books from public libraries [this once-common and indeed formerly almost universal custom still lingers on in the age of e-books and downloads, along with other quaint British practices such as Morris dancing and shove ha'penny].  The statutory scheme for authors' remuneration (a shove of a bit more than a ha'penny into a substantial number of authorial pockets) is now over 30 years old, but it is infused from time to time with the occasional amendment, the most recent of which --SI 2014 1457 The Public Lending Right Scheme 1982 (Commencement of Variations) Order 2014 -- is noted here:


The Public Lending Right Scheme 1982 (the Scheme) provides for payments to be made to authors based on the number of times their books are lent out of public libraries. This Order brings into force on 1st July 2014 variations to the Scheme following the extension of the public lending right to narrators and producers and to audio-books and e-books on 30 June 2014.

The Appendix to the Order sets out the variations to the Scheme.

Article 4 of the Scheme is amended so that producers and narrators of audio-books can be eligible for payments under the Scheme. A person can prove their eligibility in respect of an audio-book or an e-book by reference to a written contract with the publisher, or to the case in which the audio-book is sold, or by being named within the audio-book if these identify them as a writer, translator, editor, narrator or producer.

Article 6 of the Scheme is amended so that it extends to audio-books and e-books. Article 9B is inserted in order to specify the shares in the payments made under the Scheme to the various contributors to an audio-book.

Article 14A is amended so that payments can be made in respect of a posthumously eligible producer and narrator in accordance with the shares specified in article 9B.

Article 17 is expanded to include a producer or narrator applying for registration of an audio-book for payments under the Scheme.

In Article 39(a) ‘marked’ is replaced with ‘separately identified’ as a more appropriate term in relation to the obligation on designated library authorities to identify individually the printed, audio-book and e-books whose loans are recorded and reported so that payments can be made.

The Impact of this Order on business, charities and the voluntary sector is negligible and for that reason, no Regulatory Impact Assessment is required to accompany it.

Thanks go to Graham Titley (Information Specialist, Copyright Advisor and Subject Lead for Biomedicine; Dentistry; Law; Medicine. Technology and Information Services at the Charles Seale Hayne Library, Plymouth University) for spotting this information and for drawing it to my attention.
Posted by Jeremy at 4:11 am