Exhaustion of copyright and sale of altered products: CJEU rules in Allposters

The Court of Justice of the European Union ruled yesterday that the consent of a copyright holder does not cover the distribution of an object incorporating his work where that object has been altered after its initial marketing to such an extent that it constitutes a new reproduction of that work. The ruling is in Case C‑419/13, Art & Allposters International BV v Stichting Pictoright, a request for a preliminary ruling from the Hoge Raad der Nederlanden (the Supreme Court in The Netherlands).

The ruling deals with the exhaustion of the distribution right in copyright protected works under InfoSoc Directive 2001/29, Article 4 of which reads like this:

1. Member States shall provide for authors, in respect of the original of their works or of copies thereof, the exclusive right to authorise or prohibit any form of distribution to the public by sale or otherwise.

2. The distribution right shall not be exhausted within the Community in respect of the original or copies of the work, except where the first sale or other transfer of ownership in the Community of that object is made by the rightholder or with his consent.

Significantly, the InfoSoc Directive does not contain a proviso found in European trade mark legislation, notably in Article 7(2) of the Trade Mark Directive 2008/95, that exhaustion shall not apply


where there exist legitimate reasons for the proprietor to oppose further commercialisation of the goods, especially where the condition of the goods is changed or impaired after they have been put on  the market.

The facts of our case, in short, run like this: 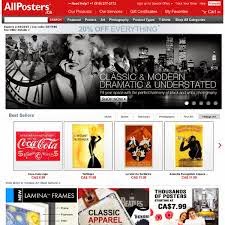 Allposters, through its websites, markets posters and other reproductions depicting the works of famous painters, which are covered by the copyright exploited by Pictoright. Among other products, Allposters offers its clients reproductions in the form of posters, framed posters, posters on wood and images on canvases. In order to produce an image on canvas, a synthetic coating (laminate) is first applied [by Allposters] to a paper poster depicting the chosen work [for which the copyright is managed by Pictoright]. Next, the image on the poster is transferred from the paper to a canvas by means of a chemical process. Finally, that canvas is stretched over a wooden frame. The image of the work disappears from the paper backing during the process.

The Hoge Raad der Nederlanden referred the following questions to the CJEU for a preliminary ruling:


‘(1) Does Article 4 of Directive 2001/29 govern the answer to the question whether the distribution right of the copyright holder may be exercised with regard to the reproduction of a copyright-protected work which has been sold and delivered within the [EEA] by or with the consent of the rightholder in the case where that reproduction had subsequently undergone an alteration in respect of its form and is again brought into circulation in that form?

(2) (a) If the answer to Question 1 is in the affirmative, does the fact that there has been an alteration as referred to in Question 1 have any bearing on the answer to the question whether exhaustion within the terms of Article 4(2) of [Directive 2001/29] is hindered or interrupted?

(b) If the answer to Question 2(a) is in the affirmative, what criteria should then be applied in order to determine whether an alteration exists in respect of the form of the reproduction which hinders or interrupts exhaustion within the terms of Article 4(2) of [Directive 2001/29]?

(c) Do those criteria leave room for the criterion developed in Netherlands national law to the effect that there is no longer any question of exhaustion on the sole ground that the reseller has given the reproductions a different form and has disseminated them among the public in that form (judgment of the Hoge Raad of 19 January 1979 in Poortvliet, NJ 1979/412)?’

Yesterday the CJEU answered this battery of questions with some brevity:


Article 4(2) of Directive 2001/29 ... must be interpreted as meaning that the rule of exhaustion of the distribution right set out in Article 4(2) of Directive 2001/29 does not apply in a situation where a reproduction of a protected work, after having been marketed in the European Union with the copyright holder’s consent, has undergone an alteration of its medium, such as the transfer of that reproduction from a paper poster onto a canvas, and is placed on the market again in its new form.

A rather fuller note on this decision by fellow blogger Eleonora, also summarising the not-yet-in-English Opinion of the Advocate General, can be found on the IPKat here (Eleonora has promised more to come ...).  Meanwhile, this blogger will confine himself to the observations that (i) the CJEU appears to have reached the same conclusion as would have been reached in an action for trade mark infringement, notwithstanding the absence of a specific provision along the lines of Article 7(2) of the Trade Mark Directive and that (ii) the term 'moral rights' appears just once, incidentally, in the ruling, while it seems that this ruling will be of particular use and interest to those seeking to resist the distribution of tangible products on the basis of infringement of the right to object to distortion or mutilation of their original works.

This case, whatever you may think of the decision, is another example of the CJEU's new, speedy approach to dealing with references for rulings from national courts.  The reference was only made in July 2013, so the whole issue has been turned round in 18 months. Only a few years ago it was rare for a ruling in an intellectual property case to be issued within 22 months.
Posted by Jeremy at 10:09 am

In the comments on the related posting about this case on the IPKat blog, James Plotkin has helpfully drawn attention to a Canadian Supreme Court decision in a case known as Théberge v Galerie d'Art du Petit Champlain Inc where the facts were very similar to Art&AllPosters, but where the decision went the other way. Personally I prefer the Canadian Supreme Court's reasoning. Interestingly, 3 of the Canadian justices dissented, basing their opinion very much on the droit'auteur doctrine. One wonders if the CJEU was persuaded towards its decision for similar reasons. If so then this does not necessarily bode well for any future harmonisation of EU copyright law.