A California bill, AB-37, introduced in December 2014 by Assemblywoman Nora Campos (D-San Jose) would require libraries providing public access to a 3D printer to post a notice alerting users of their potential intellectual property infringement liability for misuse of the 3D printer. The 14-point type notice would have to:

“(A) Provide citations to the applicable state and federal laws that may impose civil liability or criminal penalties for misuse of a 3D printer, including laws regarding copyright infringement and trademark and patent protection.
(B) Describe the potential damages for liability and criminal penalties that may apply for a violation of these laws.
(C) Alert users of the 3D printer that it is the responsibility of the user to be aware of and abide by the laws that may apply to the use of a 3D printer.”
The California Department of Justice would have to review and revise the notice annually “to reflect updates to the applicable laws.” 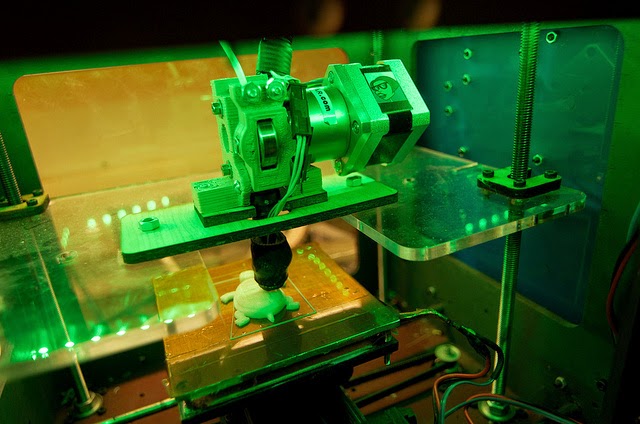 What is 3D Printing?

The bill defines a 3D printer as “a machine or other device that manufactures or produces solid objects by depositing layers of material, including, but not limited to, plastic, pursuant to instructions that are stored and displayed in an electronic format as a digital model.” Indeed, most 3D printers use ABS (acrylonitrile butadiene styrene) or PLA (polylactic acid) plastic as printing material. However, a company is already using 3D printers and bioprinting technology to  print 3D liver tissue from human cells, and it is also possible to use other materials, such as steel or resin.

3D Printing Soon in Every Library?

While the high cost of 3D printers still prevents them to be household staples, some public libraries are already giving their patrons the right to use their 3D printer. The number of U.S. libraries with 3D printers should grow in the near future, as the MakerLab Club, a U.S. community of libraries and museums, has for a goal to “advance 3D digital literacy by bringing 3D printers, 3D printing programs, workshops and access to students, adults, educators, schools and non-profits.” It donates 3D printers to libraries and assists libraries in setting up 3D workshops so that their patrons may learn how to use these new printers.

While 3D printers may be beneficial to humanity, by allowing the relatively cheap and easy production of body parts, tools, shoes, or even houses, they may also be used to print infringing goods.

Designers can draw their original 3D printing ideas using a design program such as CAD. The digital object design file may then be used to print the object. Users without design skills may easily find these files on specialized platforms on the web, for instance, the thingiverse site which allows its users to browse the 3D printing files uploaded there by others, and download them for free.

The California bill has been derided by some online, but it seems that requiring such a warning is quite innocuous, and libraries themselves have published models of such warnings to be posted on their 3-D printers. However, I am more concerned that the doctrine of fair use would fail to protect 3D users from cease-and-desist letters demanding they stop their use of a work to create a derivative version of it, by modifying an original digital object design file, or generating such a file by scanning a work protected by copyright. 3D printing indeed could bring a new dimension to fan-art. Toy company Hasbro recently authorized third parties to create their own 3D print version of its famous My Little Pony Toy, as part of a promotion for the famous plastic equine. This is an interesting initiative, but a company which had not  authorized such derivative work could threaten to file an infringement suit. The work may or may not be protected by fair use, but the fan may not have the financial resources to seek legal advice.

Thingiverse asks its users to only upload their own creations, or those created by others, and published under a CC license, but nevertheless received its first DMCA takedown notice in 2011, over the upload on its site of a Penrose Triangle. This example is particularly interesting as it can be argued that, as the Penrose Triangle is in the public domain, its 3D representation is also in the public domain.

But not everybody would agree with this statement. Last year, a 3D printing enthusiast from South Dakota, received a cease-and-desist letter from the Augustana College in South Dakota which had taken umbrage from his uploading to the web 3D scans of two statues owned by the college and displayed in public, which are bronze casts of the David and Moses masterpieces by Michelangelo, both of which are, needless to say, in the public domain. Well, so are their reproductions, including those made using 3D printers. Let’s note that in Europe, owners of the moral rights of a work in the public domain could invoke these rights to prevent, say, the 3D printing of the work in a garish and cheap material, or an obscene or disparaging modification.

As this is a copyright blog, I will not write about other legal issues which could be raised by 3D printing, but consumer law and tort law may also be interested in 3D printing. The American Library Association recently published “An Introduction to 3D Printing and Public Policy” where it noted that 3D printers may produce faulty products which could injure consumers, and wonders who would be held liable for injuries sustained by these defective products. Would it be the inventor who printed and sold the item? Or maybe the manufacturer of the 3D printer? The programmer who wrote the code for the product’s design? Or even the libraries? I wonder if a bill will soon be presented, either in California or in another state, proposing to warn 3D printer users of the potential liabilities they face if printing a defective object which would cause harm…

Image is courtesy of Flickr user Keith Kissel, under a CC BY 2.0 license.
Posted by Marie-Andree Weiss at 2:11 pm

Given the various legal principles around the globe that allow private reproduction of copyrighted works (either with or without levy-based compensation, flexible as Fair Use or rigid as the European approach) and given the fact that industrial property law is in most cases not even applicable in non-commercial settings ... well, yes, such signs would be a severe case of spreading F.U.D., nothing to be applauded.

... oh, and one more thing: Never has anyone IMHO prevented reproduction of works in plastic or raisin based on moral rights. If you think you know of cases, please link them or at least provide a citation.

btw: Product safety regulations are a much more serious topic around private use of 3D printing than IP issues. I suggest a little peek across the fence once in a while.