There's so much doom and gloom in the world of copyright enforcement, and few readers of this weblog can have failed to notice that life is rarely rosy for photographers.  It is therefore with great pleasure that the 1709 Blog can give some space to a bit of jubilation on the part of a small claims track litigant in the Intellectual Property Enterprise Court (IPEC) for England and Wales. The litigant in question is aerial photographer Jonathan Webb of Webb Aviation (here and here), whose stunning photograph -- portrayed below -- was brutally and callously infringed, with results that turned out to be far better for the victim than the infringers could ever have imagined.  This is what he writes:


Hi, I have news from the IPEC small claims track which may be of interest. The short version is that I was awarded a 500% Flagrancy uplift plus costs which I believe is a new record for the IPEC small claims track. The undisputed value of my images was £300 (ex VAT) so I got that plus £,1500 plus court costs, plus train fair plus £90 witness expenses, making a grand total of £2,716.

Another big first for IPEC small claims is that the corporate veil was well and truly pierced. The two directors were held to be personally jointly and severally liable along side their now dissolved limited company.

In the IP world generally this is probably not big news but for small-time creative like me, the IPEC small claims track has proved to be very effective and has changed the IP scene dramatically. Before the IPEC small claims track opened in 2012 the UK had become a copyright wild west. Copyright of IP worth just a few hundred pounds was effectively unenforceable with legal fees threatening to top £20,000 for a case arguing over a work with only a three figure value. In my own case only a very tiny proportion of commercial users of my images were doing so lawfully. The vast majority of people wanting to use my images were simply illegally copying the image from my website and removing any copyright info from my images.

In 2011 I was at the point of almost giving up and had reduced my expenditure on stock photography in the UK dramatically, preferring to invest more in my German photography, where copyright infringement is much less of a problem. Once the IPEC small claims track opened all that changed dramatically. Not only can I make a few of the infringers pay me, but much more importantly many previous infringers are now having to actually take a licence in my works, which has led to a big increase in normal sales over in addition to the small additional infringement settlement income. This has saved my business form destruction and I am investing in photography once again. 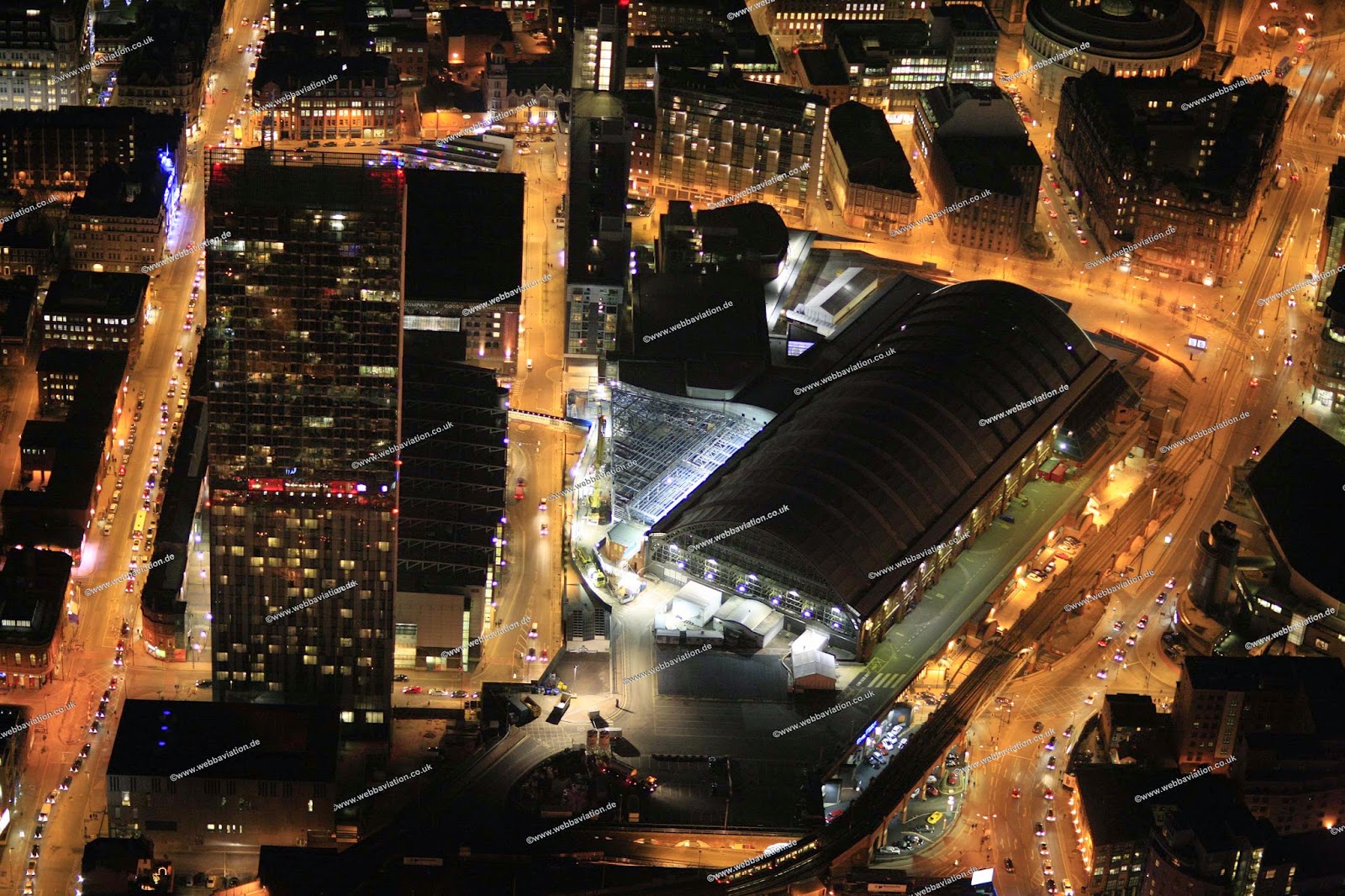 The image that was infringed is shown above. In the infringement the image was converted to black and white and each and every one of the copyright notices (©www.webbaviation.co.uk) was removed . Here and here are a couple of close-ups showing the original and infringing versions side by side showing just two of the 33 instances where the script was carefully removed, using the Clone tool as found in photo editing software such as “Photoshop”. Considerable time over many hours has been spent on removing this copyright script as each script has been expertly removed a tiny bit at a time so that the replacing texture matches into the rest of the photograph. Great care and effort has been devoted to ensuring that what was previously covered by the copyright script is replaced by something which looks like what should have been there beforehand, so for example, where © www.webbaviation.co.uk had previously covered a section of tram lines, in the infringing version of the image, new tram lines have been carefully painted into place so that little trace of the removed copyright script remains. Similarly where the script previously crossed a series of roof trusses over the Great Northern Railway Goods warehouse, new roof trusses have been painted in by the infringer to replace those previously covered by the copyright script. The result is that to the layman the image looks like an original image, however to an expert when viewed magnified, the clone tool leaves behind tell tale evidence of its use.

The big issue of the case was the piercing of the corporate veil. The defendants in this case are a limited company and the two directors against whom I personally issued proceedings as joint tortfeasors with their company. One of the directors was present and represented himself, his co-director and his company. He reiterated in court that the website had been contracted to a third party and that any liability on their side should be the liability of the company and not the directors.

The judge found in the claimant's favour and found the directors to be personally liable with the judge citing MCA Records Inc v Charly Records [2002].

I had thought much of the veil-piercing would rest on the fact that the defendants had abused the corporate veil by dissolving the company in the middle of proceedings (the form to dissolve the company was by amazing coincidence signed the day before the defendants received the claim form!). Anyway, that was not mentioned but much was said over the two directors controlling the company alone. The phrase "directing mind" from the above case was used.

Clearly veil-piercing is not for every situation but in cases like this the directors must have been party to the decisions around the infringement which was criminal in nature, they are personally liable.

The defendants' other defence was the usual Copyright, Designs and Patents Act section 97(1) one: "We didn't know it was copyright protected". This got short shrift from the judge who quoted the Hoffman v Dare judgment. The judge said it was naive to suggest that a company involved in promotion and marketing could say they thought images found on the net were not covered by copyright.

When it came to flagrancy I was shown two letters which the defendants had written to the court, describing the claim as ludicrous and preposterous. I had not been copied with these letters but was given time to read them during the hearing. As well as denying their own liability and placing blame on the uncontactable web designer the defendants' letter also stated that the claimant was responsible for the infringement because I had put the images on the internet. Now if we go back to the original image I linked earlier, you can see that in the entire history of photographs on the internet there has never been a more clearly copyright marked photograph displayed so there is no doubt that the defendants' unwise comments and attitude to copyright contributed greatly to the amount of the flagrancy award -- and indeed the judge commented on the defendants' attitude to copyright in her summing up.

Also coming back to haunt them, the defendants had described the removal of 33 instances of “© www.webbaviation.co.uk” and unlawful use of the image as "inadvertent"! The judge commented that the use of this word was misleading and indicative of the defendants' attitude. The removal of 33 copyright scripts was described by the judge as deliberate, deceitful, calculated and not easy to do with each script being individually removed. This also had the consequence of orphaning the work.

There was also derogatory treatment as the defendants had added their own assertion of copyright on the web page, deliberately removing the claimant;s copyright notice and inserting their own copyright notice at the bottom of each web page which indicates they knew about copyright.

All in all a very interesting day and, for me, the most important thing is not the £2716 I will get from the defendant, but the fact that the defendant has to pay £1,800 for a £300 picture, plus costs, will deter other image users from infringing my work. This will be worth far more than £2,716 in extra sales from people who will now buy instead of infringe.

Thank you, Jonathan, for bringing your success to our attention. Since this was in the Small Claims section of the IPEC, we probably cannot expect that there will be a written judgment appearing on the BAILII website. So, I wanted to ask about one thing you mentioned in your write-up. Bearing in mind that you are not a lawyer, did the court actually find that there had been derogatory treatment (per s 80) of your image? What you describe certainly sounds like an infringement of your moral rights but I am curious as to how removing your copyright notice and replacing it with theirs, amounted to treatment which prejudiced your honour or reputation. Arguably there was infringement under s 84 - false attribution - although I am not sure that putting a fake copyright notice on a work amounts to attribution, because it does not refer to the author's in personam rights, but to the economic property right of copyright.
Since we see very few cases involving moral rights, it would be interesting to see the judge's comments, even if they were obiter dicta, on this aspect. It sounds like the sort of decision we would expect from a French court.
Anyway, congratulations on your win.

One can only wonder what the time, which must have been considerable, that the culprit who removed 33 copyright notices was worth as someone's paid employee! It's difficult to imagine anyone skilled at Photoshop being willing to expend this much time and effort for only 300 pounds. How baffling then that the infringers were willing to do this rather than to simply license (sorry, licence) the image. In fact, I'm sure any number of amateur or semi-pro drone owners could have been persuaded to capture the same scene anew for half of that.

Does anybody know if the judgment has been published yet? And if so, where I can find it?

Thank you for such an interesting insight. I am going through something similar myself at the moment and would like to ask...Have you been paid in full yet? Thank you.