"The bad gains respect through imitation, the good loses it especially in art" - Friedrich Nietzche

While all art, however good or bad it is, qualifies for copyright assuming that it is original, in many jurisdictions (for instance France and Germany) photography has to meet a certain standard before it can gain the same sort of protection as its fellow artistic works. This was amply demonstrated in the French case of the Jimi Hendrix portrait reported on by Marie Andree here. Even in the USA, the famous case of Bridgeman Art Library vs Corel Corp introduced a caveat when deciding if a photograph per se qualified for copyright protection. The objection rests on the fact that, ordinarily, the camera just records what is in front of it in a mechanical way, much as a photocopier might do. To overcome this objection the photographer may, in some cases, need to demonstrate some special input in the form of choices he or she made over lighting, point of view, cropping etc in order to make the work 'original'. By these criteria most photojournalism would fail to make the grade, and photographic artists of the calibre of Henri Cartier Bresson might well be dismissed as mere snappers, simply because they recorded the scene at the decisive moment.

"Photography is not like painting,  There is a creative fraction of a second when you are taking a picture. Your eye must see a composition or an expression that life itself offers you, and you must know with intuition when to click the camera. That is the moment the photographer is creative,  Oop! The Moment! Once you miss it, it is gone forever."  Henri Cartier-Bresson quoted in the Washington Post in 1957.

So it is more than a little ironic that we hear of yet another case of a painting which is a direct copy of a photographic work, which some might term photo reportage. And if the copying had not been spotted, this painting would have been accepted as an original work in the Infopaq sense of being a creation reflecting the spirit and personality of the author, while the work which the artist copied might well have failed to impress the French courts (per the Jimi Hendrix case) as being worthy of copyright.

The latest case concerns a portrait by artist Perry Milou of Pope Francis officially commissioned for the Pope's forthcoming visit to the USA, which it has been revealed is entirely based on a photograph taken by Italian photographer Franco Origlia, to which Getty owns the rights. 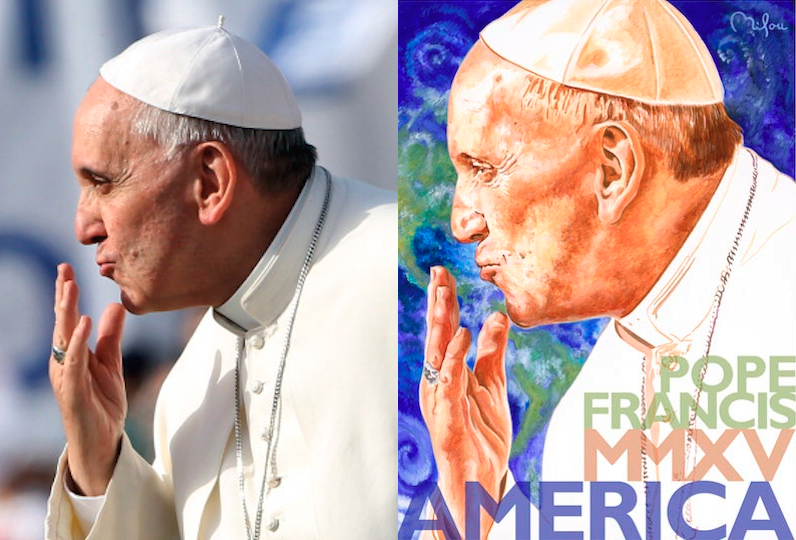 This comes only a few months after the Luc Tuymans case in Belgium and 3 years since the Shepard Fairey Obama Hope poster case, in which the respective artists were found to have infringed the work of photographers.

Whoever coined the phrase, imitation is the sincerest form of flattery clearly wasn't a copyright lawyer.
Posted by Anonymous at 9:04 pm

Andy Hi, curious is a handmade ,one off copy ,a reproduction for the purposes of copyright law ?
For example if somebody went to the trouble of copying by hand all of Catch 22 have they breached copyright ?

Hi John,
Yes unless it is covered by an exception such as the one for private study/research purposes found in most copyright law, manual copying would infringe copyright. The US doctrine of Fair Use might provide even more leeway if the copiers could demonstrate the transformative nature of their version.
I suspect you may have in mind the widespread practice (does it still go on in formal education?) of copying of works of art by students in order to understand the techniques and skill of the masters. If so, then this would probably be covered under the research exception.