Crowdfunding May Take Fair Use Where It Has Never Gone Before

On December 29, 2015, Paramount Pictures and CBS Studios sued Axanar Productions and its principal Alec Peters, claiming that its short movie Prelude to Axanar infringes their copyright in Star Trek, as it is an unauthorized derivative work (Complaint). On February 22, 2015, Defendants filed a motion to dismiss (Motion), claiming that the complaint does not contain sufficient factual matters to put Defendants on fair notice of the claims against them.
Star Trek first appeared on television in 1966, and the original series ran three seasons until 1969. The franchise now comprises six television series and twelve movies. Another movie is set to be released on July 22, and another television show is planned. The Complaint claims that Star Trek is “one of the most successful entertainment franchises of all time.”
In one of the episodes of the original series, Captain Kirk, the captain of the U.S.S. Enterprise, meets his hero, former Starfleet captain Garth of Izar, and they discuss the battle of Axanar between the Klingon Empire and the Federation, which was won by Garth. Reading about the battle is required at the Starfleet Academy, of which Captain Kirk is a proud graduate. This is the only time the battle is mentioned in Star Trek. 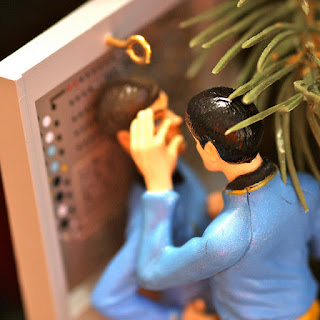 The battle of Axanar is the topic of a short movie written, directed and produced by Defendants after a successful crowdsourcing campaign on Kickstarter. The movie has been shown for free on YouTube since 2014. Defendants are now raising money through crowdsourcing to produce a longer Axanar movie. According to Defendant’s website, the movie is in pre-production with an anticipated release in the first half of 2016.
However, Defendants moved to strike Complaint’s allegation that they “are in the process of producing a film called Axanar.” They also argued the copyright infringement claim regarding the movie is premature, at it has not yet been made, and that “seeking to stop the creation of a work at this stage would [be] an impermissible prior restraint” (Motion to Dismiss p. 10).
Fan Fiction
The Complaint states that Star Trek “has become a cultural phenomenon that is eagerly followed by millions of fans throughout the world.” Indeed, Star Trek has its own fan fiction cottage industry. It includes short stories, novels – like this one about Garth of Izar – - and even new episodes, such as those produced by “Star Trek: New Voyages,” a project which is also crowdfunded and produced by a non-profit. The first New Voyage episode was released in 2004 and the project is still going strong, without apparent concern from CBS and Paramount.
In an article published in 1997, Professor Rebecca Tushnet traces “[f]an fiction and organized media fandom… to the second season of Star Trek in 1967,” and cites a much earlier instance of fan fiction when Lord Tennyson imagined what happened next to Ulysses.
Under Section 106(2) of the Copyright Act, the copyright owner has the exclusive right to prepare derivative works. There is no doubt that fan fiction is derivative work, that is, “a work based upon one or more preexisting works.” Is fan fiction copyright infringement?
Copyright Infringement
Plaintiff in a copyright infringement suit must prove ownership of the copyright and must also prove actual copying. Copying may be proven by circumstantial evidence by showing access to the protected work and substantial similarity.
Plaintiffs claimed they own copyrights in the Star Trek television series and motion pictures. However, Defendants argued that the Complaint “lump[s] both Plaintiffs together and appear to allege collective ownership of all of the Star Trek [c]opyrighted [w]orks,” even though Plaintiffs cite a copyright assignment from Paramount to CBS, and “fail[ed] to specify which of those copyrights Defendants have allegedly infringed.”
Defendant, of course, had access to Star Trek. But Plaintiff must also prove substantial similarity between the original and the derivative work. The Ninth Circuit uses the extrinsic/intrinsic test created in the Sid & Marty Krofft Television Productions, Inc. v. McDonald’s Corp. case. The extrinsic text is thus called “because it depends not on the responses of the trier of fact, but on specific criteria which can be listed and analyzed. Such criteria include the type of artwork involved, the materials used, the subject matter, and the setting for the subject. Since it is an extrinsic test, analytic dissection and expert testimony are appropriate” (Sid & Marty Krofft at 1164).
The Complaint claims that Defendant’s short movie is substantially similar to the Star Trek works, listing similar characters, the use of the Federation, similar costumes, sets, props, and logos, and further claims that the “feel and the mood” of Defendant’s work is similar to the original works.
It is interesting to note that the Star Trek New Voyages project has also replicated some sets of the original series, such as the transporter room, the sick bay and the bridge of the Starship Enterprise, and used Star Trek characters and costumes, without having been sued for copyright infringement.
Possible Defense 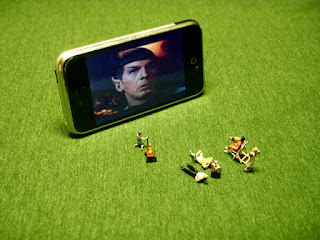 Plaintiffs argue that the Axanar short movie is neither a parody nor fair use. Defendants calls it a “short mockumentary.” Could the fair use defense be successful? Defendants did not address the issue, arguing instead that the claim is unripe.
The four fair use factors are 1) purpose and character of the use, 2) nature of the copyrighted work, 3) amount and substantiality taken, and 4) effect of the use upon the potential market.
The purpose and the character of the use factor inquiry includes whether the use is commercial. Defendants explains on their website that Axanar is not licensed by Paramount and CBS, but that it is an “independent project that uses the intellectual property of CBS under the provision that Axanar is totally non-commercial. That means we can never charge for anything featuring their marks or intellectual property and we will never sell the movie, DVD/Blu-ray copies, T-shirts, or anything which uses CBS owned marks or intellectual property.” In a crowdfunding pitch video , Alec Peters is heard explaining that CBS has “graciously allowed” that he and others make Star Trek movies as long as they do not profit from it, sell anything with ‘Star Trek’ on it, and that they “have to honor the best story - telling tradition of Star Trek.”
Indeed, this is what Star Trek New Voyages has been doing for years. Defendants claim in their Motion that Prelude to Axanar is a ‘mockumentary,’ and indeed the video narrates the battle of Axanar using a format favored by the History Channel, as explained on Defendants’ site.
As for the nature of the copyrighted work, there is little doubt that the argument would go in Plaintiff’s favor, as the television series and the movies are highly creative. The third factor, the amount taken, could be in Plaintiffs or Defendant’s favor. It is hard to say without engaging in a complete analysis.
As for the effect upon the potential market, it could be argued that it is actually beneficial for Plaintiffs, not detrimental, and thus the fourth factor could be in favor of Defendants. Professor Tushnet noted in her article on fan fiction that the great success of the official Star Trek derivative works co-existed with numerous Star Trek fan fiction, and that this “provides strong evidence against the claim that fan fiction fills the same market niche as official fiction” (p.672). Could the same be argued for the Axanar movie if it is ever produced?
This Case May Very Well Stretch the Limits of Fair Use
This case is interesting as it shows that crowdfunded User-Generated Content could stretch the limits of fair use. It seems that CBS and Paramount have tolerated Star Trek fan fiction for years, understanding that what a copyright attorney may regard as unauthorized derivative work is indeed valuable user-generated marketing and promotional content.
But written fan fiction, even if published online, may not replace the experience of watching a Star Trek movie or television show. Crowdfunding has allowed the Axanar project to be built as a non-profit project, and it would not be shown in movie theaters. But it could nevertheless compete on the market with official Star Trek movies. Watching the Axanar short movie was quite entertaining, and I expect the future movie to be as well.
Producing such fan movies is not possible without crowdfunding. As more fan fiction is likely to be financed this way in the future, it will be interesting to see the effect of this practice on fair use, although I do hope fair use will live long and prosper.
Image of Star Trek figurines is courtesy of Flickr user Kevin Dooley under a CC BY 2.0 license.
Image of Spock being watched is courtesy of Flickr user JD Hancock under a CC BY 2.0 license.
Posted by Marie-Andree Weiss at 1:11 pm

This statement is misleading: "Indeed, Star Trek has its own fan fiction cottage industry. It includes short stories, novels – like this one about Garth of Izar – - and even new episodes, such as those produced by “Star Trek: New Voyages,” a project which is also crowdfunded and produced by a non-profit." You've got an apple in with your oranges.

The Star Trek novels are not fan fiction. They are professionally written, edited, published works produced under licence from CBS. The licenced publisher, Simon & Schuster (through its Pocket and Gallery imprints), and CBS Licencing go through a series of steps to ensure licensor approval and standard book editing stages. The writers work under work-for-hire contracts, leaving copyright with CBS. CBS owns the contents of the novel Garth of Izar just as they own the contents of the Star Trek episode in which the character first appeared.

This is far from the world of fan fiction and fan films, where people do what they want without permission and hope that CBS's benign neglect will continue to apply.

Well, I would not have used the word "misleading" as it may be a tad bit strong. Shall we settle on "not clear enough"? Indeed, the book I mentioned is not fan fiction. I know this, and used it only to show an exemple of a prior use of the great Garth of Izar. As you mentioned in your comment, such official derivative products co-exist with fan-fiction. I hope my comment clarifies my post. Cheers, Marie-Andrée