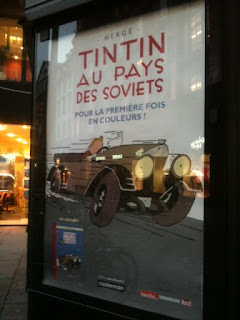 
Others argue that the colorization is just an “alternative” to the original work. In this article, Nick Rodwell, who is married with Hergé’s widow and heiress, and who manages Hergé’s estate, is quoted as saying:


“We’ve added something to the original oeuvre, while still respecting it. We’re not betraying the original black-and-white, we’re just offering a colour alternative.”


Let’s say that Hergé wanted the album to be eventually colorized. This colorization is then the expression of his will, as expressed while alive.
Tintin in the land of moral rights


But what if Hergé did not want the album to be colorized? Alain Baran, Hergé’s former secretary, does not believe that Hergé would have wanted his first album to be colorized. For Mr. Baran, “although technically successful, the colorization, which is published under the Hergé name, infringes on the author’s right of integrity in his works, as a work must be respected and left in its original state after the death of the author and that “respect for any work owed to that creator requires that it remain in the state in which it left it.”


Indeed, moral rights are perpetual, and inalienable. They are recognized by Belgium intellectual property law, Act of June 30, 1994, which article 1.2 provides that:


“The author of a literary or artistic work shall enjoy an inalienable moral right in his work. Overall renunciation of the future exercise of this right shall be null and void. This right shall comprise the right to disclose the work. Non-disclosed works may not be seized. An author shall have the right to claim or to refuse authorship of his work.”


They are also recognized by Article 121-1 of the French intellectual property Code, which provides that:


“The author has the right to respect for his name, his quality and his work. This right is attached to his person. It is perpetual, inalienable and imprescriptible. It is transferable upon death to the author's heirs. Exercise can be given to a third party by virtue of testamentary dispositions.”


French case law from the 19th century considers that adding color to a black and white picture violates the author’s moral right, Cass Crim. March 3, 1898. If the author is still alive, he can expressly say whether he considers that adding color is a violation of his moral rights. But Hergé died in 1983, and apparently did not leave written instructions as to whether he wanted his first album to be colorized. However, he may have expressed his opinion in conversations with his wife. A written expression of the author’s will is not mandatory.


His widow inherited his moral right and exercises them through Hergé’s estate. The estate states that Hergé wanted the album to be colorized. Therefore, publishing a colorized version of Tintin in the land of the Soviets is legal both under Belgium and French law.


Hergé’s widow strictly enforces his wish not to have Tintin undertake more adventures after his author’s death. This is not, however, the case for every famous francophone bande dessinée: Astérix survived the death of scenarist René Goscinny in 1977 and came back for new adventures written and designed by Albert Uderzo. Mr. Uderzo is now retired, but two more Astérix albums have been published so far penned by two new authors, Jean-Yves Ferri and Didier Conrad. Lucky Luke was originally designed by Morris with René Goscinny as scenarist. A new album, written and drawn by new authors, Jul and Achdé, has just been published. These new albums are published with the authorization of the heirs.


In all these cases, Tintin, Astérix and Lucky Luke, the persons who inherited the patrimonial rights also inherited the moral rights. But this is not necessarily the case: one person can inherit the patrimonial right and another person the moral rights. This often creates tension and may lead to a lawsuit. The author can also designate one heir to be in sole charge of one of his moral rights, such as the right of disclosure as in the Levinas affair. In that case, French philosopher Emmanuel Levinas, who died in 1995, had two heirs, his son and his daughter, but had given the right to divulgate his works only to his son, who authorized a post mortem publication of one of his father’s work. The sister sued, but the Cour de cassation, France’s highest civil Court ruled in 2010 that the sister had no right to divulgate, and thus her authorization to publish the work was not required.


I just wonder… What if the U.S had moral rights…? Would it have an impact of Walt Disney’s business model?
Posted by Marie-Andree Weiss at 4:55 pm

"What if the U.S had moral rights…? Would it have an impact of Walt Disney’s business model?"

A cynic might say none, since the Disney Corporation already has (or will, when necessary, arrange to have) perpetual copyright. Plus even Walt Disney himself understood the commercial value of re-making his works and so his heirs, no doubt highly motivated by the income his works generate, would have little difficulty in divinning Disney's actual wishes over his moral rights.

Am curious as to what if any are the IP implications for the , growing, practice of movie studios 're animating ' dead actors for a roles in new films?
For example would a dead actors estate have some rights to say 'no' or demand some payment in that situation?

Although not exactly meeting your criterion of 're-animation' you may recall that a case from Italy in 2015 (reported here 1709) about Audrey Hepburn's image rights, was argued in much the same way in relation to the Italian Civil Code. However, generally speaking my understanding of the droit d'auteur is that it only protects the reputation of an author in connection with his/her actual oeuvres de l'espirit, not his/her personality rights per se, as is the case with most Right of Publicity enactments in the USA and elsewhere.

Andy thanks.
Would the situation be the same if a movie studio did the same sort of 'animation' with a , living actor (without their consent)?

@John R Walker.
Each of the States of the USA which have specific statutory protection (and some have common law protection) for Personality Rights have framed their legislation differently: some are stronger, some are weaker, so it's hard to generalise. But given that California's Celebrities Rights Act is among the most comprehensive (and apples for 70 years after the death of the celebrity), and of course a good proportion of the major film studios are based in California, I would think that any use of a living actor or other personality's image for the purpose of animation without permission would soon be pounced upon by m'learned friends. You may recall that recently Lindsay Lohan unsuccessfully sued Rockstar, the makers of the computer game Grand Theft Auto, claiming that a character in the game was based on her personality. That case was brought using the rather less protective New York state Right of Publicity law which is largely aimed at countering deceptive advertising and endorsements. Nonetheless it is something of a precedent for this area of the law.
And I don't doubt that modern contracts signed by actors will now include specific clauses about the re-use of footage already held by the studios, either prior to or after death of the individual concerned, in order to head off just such a dispute.