France: Any Alteration/Modification of a Work in Public Domain is Infringement of Moral Rights

Auguste’s Rodin’s works are now in the public domain. This does not mean that you can do just about anything with them. I wrote a short post about the issue while a guest Kat, and a recent holding from the French highest civil Court, the Cour de cassation, gives me an opportunity to revisit the issue.


Mr. Guy X. reproduced and sold several sculptures of Rodin, now in the public domain, from May 1999 to September 2000. The statues were reproduced by pouring bronze on Rodin’s former foundry models. Mr. X was sued in criminal court for having presented these works as original pieces. He was found guilty of counterfeiting and selling counterfeit works, and was ordered to indemnify the Rodin Museum in Paris, a civil party to the case, for infringement of the author's moral rights. 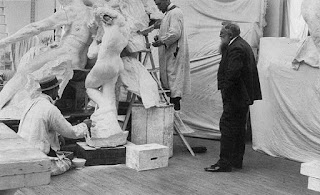 
As for the works in the public domain, Mr. X argued that, while article 121-1 of the French intellectual property Code indeed provides authors the right of respect in one’s name, of one’s quality and of one’s work, a set of moral rights which are perpetual, inalienable and imprescriptible, he had not infringed on Rodin’s moral rights as the works he had produced were of sufficient of quality as to not infring on these moral rights.


The Paris Court of appeals had upheld the judgment against Mr. X. and found that he had indeed forged works in the public domain, finding that Mr. X. wanted to confuse the public about the origin of the works in such a way as to suggest that they were indeed original sculptures, made during Rodin’s lifetime, whereas they were actually made by over moldings.


The process used by Mr. X “necessarily entails a change in the size of the original work, an attenuation of the precision of the features, a weakening of the vigor of the forms created, and that several of the works at stake had distorted the original sculptures, by modifying pedestals of the structures, removing, adding or inverting an element, or by smoothing the coats of the animals, or because of a defective patina.”


The Cour de cassation approved the reasoning of the Court of appeals, because “infringement of a work which has fallen into the public domain consists of any alteration or modification of the original work.”


While the facts of the case have established that Mr. X wanted to deceive customers, the holding of the Cour de cassation is so broad that it may encompass any alteration or modification of a work in the public domain, even if such alteration is made with no intention whatsoever of deceiving the public. How should we interpret this rather lapidary ruling? Does that mean that any alteration of a work in the public domain is an infringement, but that there is a benevolent tolerance if such modification is not made to deceive the public? Or does it mean that moral rights are so strong that they prevent any modification of any work, in perpetuity?


The Cour de cassation nevertheless found that the Court of appeals did not apply the law correctly when it had found that several of Mr. X’s works which indeed reproduced works by Rodin were infringing, as the Court had not researched if these reproductions were infringing the moral rights of the author, and “broke” (casser) the Court of appeals ruling. This holding further indicates that any reproduction which would not be an exact copy of the work in the public domain would be infringing.
Posted by Marie-Andree Weiss at 1:22 pm

I think if one copies a legal work, modifies it legally and states it's not the original work, then it shouldn't be infringement of moral rights. Otherwise that's part of mutated copyright and is a huge threat to culture because if everyone prevented "alteration" itself thousands of years ago, then we likely wouldn't have the culture we know today.

Not so sure what you mean by the last paragraph.
I hope merely alteration is not itself prohibited altogether, and hopefully the court will rule that it requires confusion.

Is there any updates on this topic?