Readers of this blog may remember that the Paris Court of Appeals found in October 2015 that the staging of the opera Le Dialogue des Carmélites by Dmitry Chernyakov for the Munich Opera in 2010 violated the moral rights of composer and librettist Francis Poulenc, which adapted the eponymous theatrical play by Georges Bernanos. 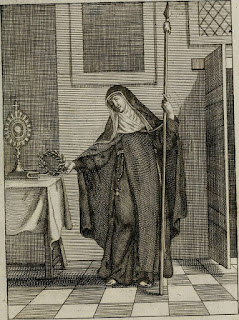 Le Dialogue des Carmélites tells the story of French aristocrat Blanche de la Force who decides to enter the Carmelite Convent, possibly to be sheltered from life, as she is fearful and shy. The French Revolution upset her world and the Carmelites must leave the convent. Blanche leaves the congregation to return to her family. When the Carmelites are arrested and sentenced to death by the revolutionary tribunal, Blanche returns to them as they are each climbing the steps to the guillotine, and she is the last one to have her head cut off.


Dmitry Chernyakov had not modified the score or the dialogue. However, his interpretation did not take place during the French revolution, but in contemporary time. In the last scene, the Carmelites are locked up in a shed full of explosives. Blanche appears on the scene and pulls them all out to safety, one by one. She then comes back to the shed which explodes, killing her, an apparent suicide.


The heirs of both Francis Poulenc and Georges Bernanos had sued Dmitry Chernyakov and the Munich Opera, claiming a violation of their moral rights, which are which are perpetual and transferable upon death under Article L. 121-1 of the French intellectual property code. The Paris Court of Appeals had ruled in their favor, finding that the scenography profoundly modified the final scene and distorted its spirit. The DVD of the play could no longer be sold.


The director and the Opera took the case to the Cour de cassation, France’s highest civil court. The heirs argued in defense that “if a certain freedom can be recognized for the director to performance his work, this freedom is limited by the moral right of the author to the respect of the integrity and spirit of his work, which must not be denatured.”


But the Cour de cassation just ‘broke’ this holding on June 22. The Court reasoned that the Paris Court of appeals had noted that “the contested staging did not modify the dialogue, absent in this part of the preexisting work, nor the music, even going so far as to reproduce, along with the religious songs, the sound of the guillotine which rhythms, in the Francis Poulenc opera,  each death, and that the end of the story, as staged and described by Dmitry Chernyakov, respected the themes of hope, of martyrdom, of grace and transfer of grace and of the communion of saints dear to the authors of the original work, [and that therefore] the Court of appeals did not draw the legal consequences of its own findings and violated [article L. 113-4 of the French intellectual property code.]”


Article L.113-4 of the French intellectual property code states that “[t]he composite work is the property of the author who created it, subject to the rights of the author of the pre-existing work.”


In our case, the staging of the opera is a composite work, subject indeed to the rights of the authors of the pre-existing work, the opera. Such rights include moral rights. But the staging, as a composite work, is also a work on its own, protected by article L. 113-4. Since it does not infringe on the rights of the authors of the original work, their rights had not been violated.


The Cour de cassation also cited Article 10, § 2, of the Convention for the Protection of Human Rights and Fundamental Freedoms. Protecting freedom of expression, to find that the Court of appeals erred in forbidding the sale of the DVDs of the opera and its broadcast, because it should have examined “what in the search for a fair balance between the director's freedom of creation and the protection of the moral rights of the composer and the author of the libretto justified the prohibition order it ordered.”


The Versailles Court of Appeals will not review the case again and will likely rule in favor of the director, and thus preserve his freedom to create and to express himself. Moral rights are often viewed in the U.S. as a way to censor creativity, and the 2015 Paris Court of appeals ruling certainly provided grounds for this view.
Posted by Marie-Andree Weiss at 6:39 pm