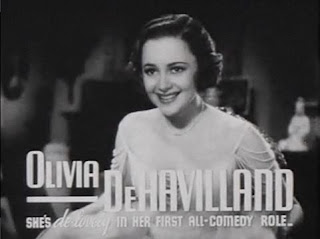 If you do not remember who Olivia de Havilland is, you may choose to watch Feud , a television series, which first season details the rivalry between Bette Davis and Joan Crawford, which currently streams in the U.S. and will be shown in the Fall on BBC 2.


But this may not be a good idea, as Miss de Havilland has taken offense of her portrayal in Feud, and filed yesterday a California right of publicity and invasion of privacy (by publicly placing a person in false light in the public eye) lawsuit in the Los Angeles County Superior Court against the producers of Feud (Hat Tip to Hollywood Reporter).


Miss de Havilland, played by Catherine Zeta-Jones, is featured in the opening sequence, as she is being interviewed during the 1978 Academy Awards. During the interview, Catherine Zeta-Jones, as Olivia de Havilland, is portrayed as saying: "There was never a rivalry like theirs [Davis and Crawford]. For nearly a half a century, they hated each other, and we loved them for it." The complaint alleges that Miss de Havilland portrayal in Feud “creates the public impression that she was a hypocrite, selling gossip in order to promote herself at the Academy Awards.”


Miss Zeta-Jones wears a dress similar to the one won by Miss de Havilland that night, similar jewels, and hairdo. According to the complaint, the Welsh actress has even been fitted a chin prosthetic to make her look like Miss de Havilland. The complaint argues that “by meticulously including specific details from real life, [Defendants] intended for the audience to believe that the events depicted and the statements made by role players in "Feud" were accurate, and were actually quotes from real people, including OLIVIA DE HAVILLAND.”


The complaint anticipates a First Amendment defense, arguing that “[t]here is no public interest to be protected by putting false statements into the mouth of a living person, using their name and identity for a false and unauthorized purpose, damaging their reputation. The First Amendment does not protect the false, damaging, unauthorized use of the name and identity of a real, living celebrity merely because the perpetrators cloak the work in the title of pure fiction, much less a pseudo-documentary film.”


California provides a statutory right of publicity, Cal. Civ. Code § 3344(a), under which “[a]ny person who knowingly uses another's name, voice, signature, photograph, or likeness, in any manner, on or in products, merchandise, or goods, or for purposes of advertising or selling, or soliciting purchases of, products, merchandise, goods or services” must first obtain the person’s consent . The complaint alleges that Miss de Havilland did allow authorize Defendants to use her name, identity or likeness in the Feud series and its promotional materials, and further alleged that Defendants knew that she has not given her consent for such use.


California also recognizes a common law invasion of privacy by appropriation of name or likeness, “that brings injury to the feelings, that concerns one's own peace of mind, and that is mental and subjective,” Dora v. Frontline Video at 542. Therefore, it is not necessary at common law for the use of likeness or name to have been commercial, and plaintiff can seek mental stress damages.  Indeed, the complaint alleges that the interview featured in Feud  “and the statements attributed to OLIVIA DE HAVILLAND are contrary to her public and private image and reputation and have caused her economic, reputational, and emotional damages, including distress, anxiety, and humiliation.”


How will this legal feud end? Stay tuned…
Posted by Marie-Andree Weiss at 2:01 pm