The Agence France Presse posted a video on Twitter this month, which shows that the French fashion house Christian Dior had used traditional embroidery motifs in its pre-Fall 2017 collection  (see here too). The embroideries are originally from the Bihor area in Romania and adorn a traditional garment, the “cojoc binşenesc” (more about it here and here).


In this particular instance, the community reacted by taking advantage of this publicity and launched a website, Bihor Couture, which sells traditional Bihor garments and accessories.  As the 1709 Blog is a copyright blog, I will not comment much on the trademark issues which the choice of ‘Bihor Couture’ could raise, but here are my quick two cents. In the U.S., parody is a defense in a trademark infringement case. If you are interested in this topic, you can read about the recent My Other Bag Second Circuit case here and here. French trademark law does not have a parody exception, but courts have recognized such a defense, albeit sparingly, when parody was used as a social/political comment (see for instance this case, where the French Supreme Court held in 2008 that article 10 of the European Convention of Human Rights protects the right of non-profit Greenpeace to parody the Areva brand). 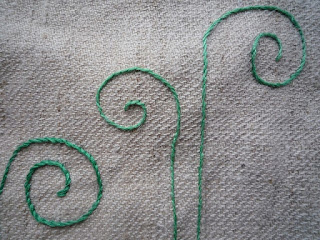 Can embroideries be protected by copyright?


Well yes they can, on both sides of the Atlantic, if they are original enough. Embroidery motifs may, however, be in the public domain, or not original enough to be protected by copyright.


In the U.S., embroideries can be considered fabric designs which are copyrightable. The mere fact that embroideries may adorn a piece of garment does not prevent them to be protected by U.S. copyright, even though a garment is an uncopyrightable useful article.


Since Star Athletica [see our comment on the case here], an artistic work applied on or incorporated into a garment  may be eligible for copyright protection if it: "(1) can be perceived as a two or three-dimensional work of art separate from the useful article and (2) would qualify as a protectable pictorial, graphic, or sculptural work-either on its own or fixed in some other tangible medium of expression-if it were imagined separately from the useful article into which it is incorporated."


WIPO considers that traditional cultural expressions (TCEs), or "expressions of folklore," may include handicrafts, and may be protected by copyright if recently created. It also noted that “[i]n many countries and for many indigenous and local communities, the handicraft sector plays a vital social and cultural function and contributes significantly to communal, local and national economies.”


WIPO’s Intergovernmental Committee on Intellectual Property and Genetic Resources, Traditional Knowledge and Folklore will hold its 37th session from August 27 to 31. The Committee published last month draft articles on the protection of traditional cultural expressions, which are part of the session’s agenda and which are aimed to become an international instrument directing member States to better protect TCEs.


One of the policy objectives of the instrument would be to “prevent the misappropriation and misuse/offensive and derogatory use/unauthorized use of their traditional cultural expressions.” This is of particular interest for communities which have created designs attracting the attention of fashion companies eager to satisfy the want of their customers for authenticity.  One may remember, for instance, that a U.K. fashion company used a traditional Inuit motif on a sweater.


One of the principles stated in the WIPO draft articles acknowledges that “traditional cultures and folklore constitute frameworks of innovation and creativity that benefit Indigenous [Peoples], [local communities] [and nations] / beneficiaries, as well as all humanity.”


It also notes “the value of a vibrant public domain and the body of knowledge that is available for all to use, and which is essential for creativity and innovation, and the need to protect, preserve and enhance the public domain.” It would “secure/recognize rights already acquired by third parties and secure/provide for legal certainty and a rich and accessible public domain.”


The instrument would direct “Member States [to] the economic and moral rights and interests of beneficiaries in secret and/or sacred traditional cultural expressions….as appropriate and in accordance with national law, and where applicable, customary laws.  In particular, beneficiaries shall enjoy the exclusive rights of authorizing the use of such traditional cultural expressions.” (my emphasis).


This is certainly worthy of interest at a time when “cultural appropriation” is a hot topic, in many domains. Madonna has been recently criticized for wearing Berber clothes and a choreographer has been criticized for using in one of his works a traditional dance, with dancers in costumes looking like traditional costumes.


Could traditional works be one day perpetually protected by moral rights?


Image is courtesy of Flickr user storebukkebruse under a CC BY 2.0 license.
Posted by Marie-Andree Weiss at 2:20 pm