Actress Tara Reid has filed a right of publicity suit in the Central District Court of California. The case is Reid v. Asylum Entertainment, LLC (2:18-cv-10171).


The actress is seeking preliminary and permanent injunctive relief and damages as she alleges that Defendants Asylym and SyFy Media have misappropriated her likeness and image for commercial purpose without her consent by licensing the rights to use the actress’s likeness to manufacturers of slot machines, gambling products, and beer makers.


Tara Reid starred in the Sharknado series which was broadcast in the U.S. on the SyFy channel. Sharknado 1 led to Sharknado 2, 3, 4, 5, and, recently, 6, which you can all watch to see if reindeer sharks really know how to fly. The series has a cult following. I guess you can say it jumped the shark from the beginning. 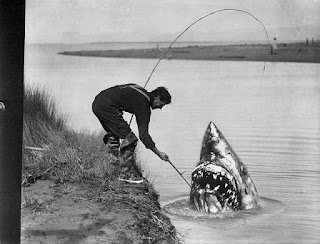 Defendant Aristocrat manufactures Sharknado slot machines and video gambling products (see one of such machines in action here). The likeness of Tara Reid is used in the play, as you may see in the first seconds (mercifully) of this video. Tara Reid also alleges that Defendants Asylum and Syfy entered into marketing and/or licensing agreements with a British brewer to produce Sharknado beer. The actress appears in her Sharknado character on some cans.

According to the complaint, Tara Reid had not authorized these uses of her likeness, as her contracts expressly requested her written consent should her likeness be used on products associated with alcohol, tobacco, gambling, hygiene and sexuality.


The actress claims that Defendants have thus breached her right under Section 43(a) of the Lanham Act, the U.S. Trademark Act, which forbids false endorsement and misappropriation of likeness. She argues that use of her likeness on the slot machines and beer cans is deceptive and likely to cause consumer confusion as to the sponsorship or affiliation between those products and herself, who did not and would not endorse such products.


The actress also alleges that this use of her likeness breaches California common law on wrongful appropriation of likeness and she alleges “that the wrongful appropriation of her likeness and identity was intentional and with the objective of exploiting her… As such, the actions of the Defendants were malicious and oppressive and justify an award of punitive and exemplary damages in an amount sufficiently large to set a public example of deterrence, and in an amount no less than $100,000,000.00.”


Tara Reid also claims that Defendant’s actions breached California common law of unfair competition, and California statutory right of publicity, section 3344 of California civil Code, and claims she is entitled, under that law, to recover all profits realized by Defendants” in an amount that will be shown at time of trial together with attorney fees, and punitive damages, in an amount sufficiently large to set a public example of deterrence and in an amount no less than $100,000,000.00.”


Plaintiff also claim Defendants breached their contractual obligations. Tara Reid had entered into an agreement with Defendants in 2016 to act in the 5th Sharknado movie. Paragraph 11 of the agreement gave producers the right to use Tara Reid’s likeness in merchandise, albeit “in-character” only, but also provided that “… in no event shall Performer’s likeness be used for any merchandising in association with alcohol, tobacco, gambling, hygiene, or sexual products without Performer’s prior written approval.” Tara Reid alleges that she never approved the use of her likeness on the Sharknado slot machines, nor did Defendants ever request such approval.


Tara Reid entered into a similar agreement in January 2018 to act in the 6th Sharknado movie, which she argues is voidable as one of the parties allegedly did not have the capacity to enter into the agreement. This issue aside, the January 2018 agreement had a Paragraph 11 similar to Paragraph 11 in the 2016 agreement.


Attorneys negotiating right of publicity contracts and performer’s contracts should keep such “morality” clauses in mind.


The California Court of appeals for the 4th District explained in Miller v. Collectors Universe that a plaintiff in a statutory right of publicity case had suffered a type of harm which section 3344(a)'s minimum statutory damages were intended to remedy. This harm  was described by the court as “the alleged injury to his mental feelings and peace of mind.”


The Court further explained that “misappropriation [of likeness] has two aspects: (1) the right of publicity protecting the commercial value of celebrities' names and likenesses, and (2) the appropriation of the name and likeness that brings injury to the feelings, that concerns one's own peace of mind, and that is mental and subjective."


In our case, Tara Reid could very well be able to prove that the use of her likeness on cans of bear and gambling machines injured her feelings. Is it $100,000,000.00 worth of feelings? We may never know, as the parties are likely to settle out of court.
Posted by Marie-Andree Weiss at 7:44 pm