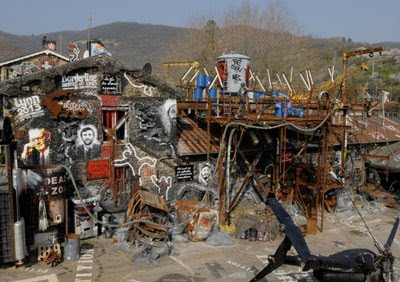 Thanks to my old friend Dan Bereskin (Bereskin & Parr, Toronto) I can bring you the following news, in the words of thierry (sic) Ehrmann himself:

"On 9 December 2009, the Abode of Chaos celebrated 10 years of combat for freedom of expression.

The Cassation Court's criminal chamber presiding over a second appeal has delivered an order dated 15 December 2009 for the destruction of the 3,123 works of art forming the corpus of the Demeure du Chaos created by the artist and sculptor thierry Ehrmann in 1999.

Founded by the conceptual act of thierry Ehrmann on 9 December 1999, the Abode of Chaos (per the NYT) is an œuvre au noir (nigredo) inspired by the alchemical chaos of the 21st Century, whose tragic and yet sumptuous embers were ignited on 11 September 2001.

After just 10 years - and more than 1200 press and TV articles in 72 countries around the world - the international art community today recognises the Abode of Chaos as a unique and "sacred" artistic factory. This free open-air museum with more than 3,123 works attracts more than 120,000 visitors each year.

Between February 2006 and June 2008, under its E.R.P. status (Etablissement Recevant du Public) status, the Abode of Chaos attracted 437,130 visitors of whom 21% came from outside France. The place also hosts a number of artists in residence.

Since 1999, the local authority of Saint-Romain-au-Mont-d'Or (where the Abode is located) has been pursuing a crusade of artistic negation against the Abode of Chaos and continues to call for "the restoration of the building to its original state" … which means effectively means the complete destruction of the Abode!

This historic case will now be submitted to the European Court of Human Rights in the framework of Article 10 of the Convention for the Protection of Human Rights and Fundamental Freedoms. The case law on this Article 10 has frequently ruled against France in the past.

The wording of the Cassation Court's rejection of our appeal clearly reflects its concern to uphold French building regulations, and their application by the Grenoble Appeal Court, as being coherent with the freedoms of expression guaranteed in Article 10 of the Convention for the Protection of Human Rights and Fundamental Freedoms.

Backed by the artists' collective and the weight of 108,000 petition signatories, thierry Ehrmann is more than ever determined to pursue the vigorous battle to defend the rights of all people to freedom of expression by launching an appeal against this second order delivered by the Cassation Court - and against French legislation - before the European Court of Human Rights.

Thierry Ehrmann considers that this decision violates his freedom of expression and that this freedom cannot be uniquely subjected to Building Regulations since artistic expression has been a national and universal right since the beginning of time.

In the current context, the petition to save the Abode of Chaos from destruction is of paramount importance. It will allow this extraordinary legal dispute to be taken before the European Court of Human Rights.

In an era when France is desperately seeking solutions to its diminishing global artistic influence and seems unsure of where to steer its national cultural policy (particularly with respect to the principle of free entry to museums), the Abode of Chaos is a bold and original response".

Follow the news direct from the Abode of Chaos here, here and here".While issues relating to human rights and cultural vandalism are always appealing, I find myself as ever focusing on the question of copyright: to what extent, if any, could the Abode of Chaos claim any sort of copyright protection and what, in commercial and moral rights terms, might be the outer limits of its protection? Readers' comments are, as ever, welcome.
Posted by Jeremy at 5:51 am