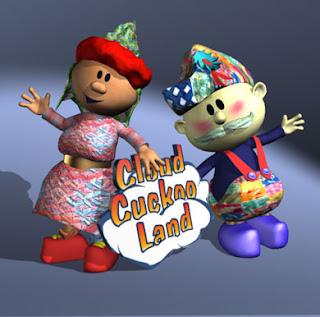 Speaking at the IBC Informa International Copyright Law 2009 conference yesterday (programme here), I gave a brief presentation on "From Pirate Bay to Pirate Party" in which I outlined my thoughts on the evolution of an IP-hostile culture into a political movement. My feeling is that the sentiments that have galvanised many politically apathetic youngsters into forming organisations and employing the democratic process for their highly focused ends is something we should take extremely seriously, and that every assertion which the Pirate Party makes should be fully addressed and responded to.

Right: The major political parties are not addressing Pirate Party issues. Are they living in Cloud Cuckoo Land?

MAQS litigation lawyer Monique Wadsted, who has been involved in legal proceedings against The Pirate Bay over the past six years (which provided the subject of her talk), took a more optimistic view: the Swedish Pirate Party is not doing so well in recent opinion polls and its membership figures are less impressive when one considers that membership is free. Nonetheless, the Swedish Pirate Party already has two Members of the European Parliament and it is not beyond the bounds of reality to imagine in a world in which that number increases. The issues which it raises are not frivolous; they also address areas beyond file-sharing and copyright alone, as Pirate Party submissions on the patentability of computer programs and policies on data protection and surveillance demonstrate. They also call for things to which no rational voter could object, such as greater transparency in the workings of the European Union's various organs. Above all, the acceptance of file-sharing as a means of sharing information, just as one might lend a friend a newspaper or DVD, is something that appeals to those who believe they cannot or should not pay for what they want -- the young and the unwaged -- many of whom have grown up in an environment in which the simple equation that governs their computer use is 'internet = free'.

My PowerPoints, for what they're worth, are here.
Posted by Jeremy at 10:49 am

Would you characterise the free software movement as comprising people who believe they cannot or should not pay for software?

There is a big difference between the restoration of cultural liberty and a demand that intellectual work be produced altruistically (gratis).

It's about being able to freely share cultural and scientific knowledge. It's not about getting something for nothing.

Free as in speech, not as in beer.

The Pirate Party leaves a lot to be desired given it maintains support for copyright in principle, however it's early days...

Copyright exists to enrich the commons. It does so, but giving the copyright holder a limited monopoly, or at least, at one point it did.

And that's the problem that the Pirate Party addresses. Since the once limited monopoly has been stretched beyond all recognition, the aim of the Pirate Party is to roll it back to what was originally envisioned, in other words to return Copyright to its roots.

I don't see how anyone can argue with that.