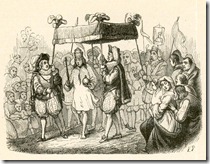 For a court decision to cause a hullabaloo and set off doomsday reports of the end of life as we know it isn’t all that unusual.  But for a court decision that leaves the existing law in place to set off that much ruckus, that is unusual.  Yesterday, the 10th Circuit Court of Appeals in the US handed down just one of these cases.

The case is called Golan and it deals with the effect of the TRIPs agreement on foreign works under US Copyright law.  (full pdf decision.)

The decision, which leaves in tact the restoration of copyright to certain foreign works has been hailed as “Terrible News” and accused of destroying the public domain.  In reality, neither of these lamentations are correct.

After the United States signed the TRIPs agreement, it amended its copyright law to be compliant with both the new TRIPs agreement and the old Berne Convention. (“Compliant” as defined by the US.)  The amended copyright act provided new copyright protection to two types of old foreign works: those that had lost their copyright due to non-compliance with a formality (such as failure to renew after the initial term under the US’s 1909 Copyright Act) and those who had not previously received copyright protection in the US because their country had not then been a member of any of the international copyright treaties to which the US was a party.

This new protection for old works was called “restored copyright,” and authors who wanted their copyrights restored had to provide notice to known users of the works or the US Copyright Office.

That was the law before Golan, and it is still the law after Golan.

The plaintiffs in Golan were users of those restored-copyright works who had used the works relying on their status as public domain works.  And they had quite a strong group of copyright experts on their team, including the Stanford Center for Internet and Society and Harvard (of Stanford at the time this case began) Professor Lawrence Lessig.  But the arguments in this case were not about copyright law; they were about constitutional law.  And the defendants, the United States government and the United States Copyright Office, they had the Department of Justice on their team.

This is the second time Golan has been to the 10th Circuit.  The first time it heard the case, the 10th Circuit affirmed the lower court’s holding with respect to two of the plaintiff’s claims, dismissing claims attempting to argue the violation of the “for a limited time” part of the copyright clause in the Constitution. [full pdf decision.]  But the 10th Circuit also remanded the case to the district court to address whether the law violated the plaintiff’s First Amendment rights.

The district court held that the plaintiffs’ First Amendment freedom of expression rights were violated.  The 10th Circuit disagreed.  And here’s where we need to get a bit into United States Constitutional Law.

There are three options for the court in terms of how the court compares these different pieces to decide if the government’s actions are ok or in violation of the Constitution.  These three options are commonly called levels of scrutiny.  Both parties, the district court and the circuit court agreed that the proper level of scrutiny in this case was intermediate scrutiny.  Agreement all around, always nice.

In order for a law to be upheld as constitutional under this medium level of inspection, intermediate scrutiny, the government must show that it has an important governmental interest in regulating the speech and that the burden placed on speech is not substantially more than necessary.

The US Government said it had three important reasons.  The court looked at one, said it was important enough and ignored the other two.

We might expect that the important interest would be that of the government to uphold US obligations under international treaties.  But then again, we might not be surprised to learn that was one of the reasons the court ignored.

The reason the court found important enough to justify the limit on speech caused by restoring copyright to foreign works was the protection of US works abroad.  Congress passed the amendment to the Copyright Act in part because it believed the world would operate on a you-scratch-my-back-I’ll-scratch-yours basis.  Other countries were refusing to restore copyright to US works in their public domains, - the decision mentions specifically Russia – and the US was told its citizens would get copyright in their works when those countries’ citizens got US copyright in theirs.

The court acknowledged the plaintiffs’ rights and the restrictions restored copyright placed on their speech rights, but it summed up the governments’ interest quite eloquently:

“Although plaintiffs have First Amendment interests, so too do American authors.” (p. 14, internal citation omitted.)

The court found that the restored copyright did not burden the plaintiffs’ speech too much because of a special provision put in the law specifically for people in the plaintiffs’ position.

In addition to restoring copyright protection to the foreign works mentioned above, the law also created some protections for those people who had used the work relying on its public domain status.  The law gave users a twelve month grace period in which to finish selling or using works with restored copyrights and then provided a mechanism for determining licensing fees if the user wanted to continue using the restored work after the grace period ended.

[British readers may be interested in pages 30 – 33 of the decision where the court spends some time comparing the US system of dealing with the burden on these users to the systems enacted in the UK.]

Although this part isn’t really necessary for this blog post and is covered well in-depth by the court decision for those who are really interested, I feel it is necessary to address it at least a bit here because of the mis-information out there in some other posts about this case.

How to structure laws to effectively enact international treaties is the duty of the legislative branch.  It is Congress that holds hearings with all sorts of interested parties, that listens to the RIAA and the MPAA and those who disagree with the RIAA and the MPAA.  It is Congress that decides which interests are most important for the country to protect and decides how those interests should be protected.  And yes, Congress must stay within the confines of the Constitution when making these laws.  Hence the development of the levels of scrutiny as mentioned above.

When the Golan court discusses how and why Congress made its decision to restore copyright, the court is not looking at whether or not Congress made a good decision.  The court is looking at whether Congress’s decision was reasonable in light of the information it had.  When the Golan decision cites some of the testimony from Congress’s hearings, the court is not “actually rel[ying] on testimony about "losses" from an RIAA official.”  The court is simply giving examples of information upon which Congress relied.

The American people might not agree with Congress’s decision, the judges might not agree with Congress’s decision, but that does not mean the decision is unconstitutional.  It is the people who are supposed to have the power to change the law, not the courts.  The people elect their Congressional representatives to represent their positions.  Whether or not that happens is a whole ‘nother issue not related to this case and addressed very well by Lessig at his site Fix Congress First.