Why you won't find Specsavers in the Thesaurus ... 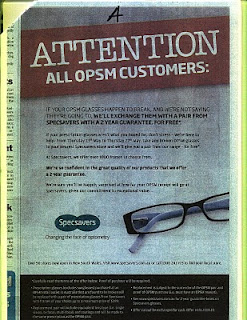 In "Synonyms – a shortsighted attempt to avoid copyright infringement", Tim Golder and Nadia Guadagno discuss Budget Eyewear Australia Pty Ltd v Specsavers Pty Ltd [2010] FCA 507, a recent Australian Federal Court decision in which interim injunctive relief was granted to restrain the use and publication of an advertising campaign where the alleged infringement consisted of the substitution of synonyms for the plaintiff's original work.

In short, Budget alleged that Specsavers' print ad and itscorresponding terms and conditions infringed copyright in two versions of a print advertisement, a radio script and a set of terms and conditions under which an offer in the advertisements were made, seeking interlocutory relief for infringement. Budget pointed to the following phrases as reflecting originality:

'If your Specsavers glasses break – and we're not saying they will – simply bring them into Budget Eyewear. We'll replace them with [sic] pair from our own range – free of charge';

'We're not saying they will, but if your Specsavers glasses break, we'll replace them for free'; and

'If your glasses aren't all they're cracked up to be, don't worry, we'll come to the rescue. For the next two weeks... you can take any Specsavers glasses to your nearest participating Budget Eyewear store and we'll replace them with a pair from our range – free of charge'. 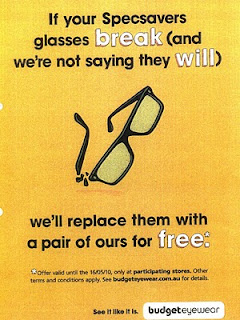 'If your OPSM glasses happen to break, and we're not saying they're going to, we'll exchange them with a pair from Specsavers with a 2 year guarantee, for free'

'If your prescription glasses aren't what you hoped for, don't stress – we're here to help. From Thursday 13th May to Thursday 27th May, take any broken OPSM glasses to your nearest Specsavers store and we'll give you a pair from our range – for free'.

Did copyright subsist in the works? Before asking whether there had been infringement, Bennett J first had to establish whether copyright subsisted in the works at all. She felt there was sufficient evidence of authorship for the purposes of seeking interim relief, and said Budget had an arguable case that

"the way in which a concept is expressed in an advertisement intended to attract customers may involve originality that attracts copyright protection ... the fact that the words are commonplace does not mean that the way in which they are put together cannot have a degree of originality".

On the issue of infringement, Specsavers acknowledged the a causal connection since it had read and absorbed Budget's advertisement and did not deny it had copied the text of Budget's ad for its own ads; it also accepted that it had copied the idea of the campaign, although this copying did not extend to exact word reproduction. Said Budget, Specsavers had sought to avoid infringement by the simple use of synonyms; Specsavers in return argued that the use and arrangement of the words and phrases in the ads was 'obvious and prosaic' and since there was a lack of any requisite originality.

Justice Bennett agreed with Budget that Specsavers chose to adopt the same expression of ideas where various means could have been used to express the concept. Specsavers could have copied the idea but exercised its own imagination to express that novel concept in new and different language. rather than "using a thesaurus" to substitute a synonym. Accordingly a prima facie case of infringement had been made out.
Says the 1709 Blog, if the original Budget ads had been more imaginative and less prosaic, Specsavers' synonyms might -- at least in an application for interim relief -- been clad with the figleaves of parody and/or commercial free speech. Even so, the message is clear: that well-known Thesaurus Rex no longer rules the world of advertising copy, if indeed it ever did.
Posted by Jeremy at 6:24 pm