Further to recent changes to private copying compensation in Spain, change may also be afoot in the Netherlands.


The private levy system in the Netherlands has been frozen since 2008 meaning that whilst blank audio and video tapes, MiniDiscs and blank DVDs and CDs are subject to levies, smartphones and MP3 players are not. To bring the system up to date, the Dutch government announced in October that new, increased, private copying levies would apply to all hardware from January 2013.
The new levies are set out below. They increase from €0.03 for CDs and DVDs to €5.00 for tablets over 8 Gb, PCs and laptops.
Understandably, this sudden propulsion of private copying levies into the modern world has caused some tension: last week three of the big hardware providers (Dell, Hewlett-Packard and Imation) along with other big players in the industry sent a letter to the State Secretary for Security and Justice, Fred Teeven, saying that the levies would "cause trade barriers and serious disincentives to operating logistics hubs and distribution centers in the Netherlands". Further they said that the levies were likely to conflict with the Information Society Directive which, they say, requires that fair compensation be based on assessment of the harm caused by private copying.
Last Wednesday, Hewlett-Packard, Acer, Dell and Imation, went further and filed a claim against the Dutch government at the District Court of the Hague claiming damages caused by the new, higher, private copying levies.


It is not clear to this blogger how a claim for damages can be filed when as yet no damages have been incurred, however the big four say that in 2013 alone they will suffer damages of  "tens of millions" of Euros. Damages aside the main gripe seems to be that the new levies were based on an estimate that the entertainment industry has lost €40 million due to private copying. The hardware providers say that the estimate is "excessive and unfounded" and that it includes losses due to illegal downloads which should not be recovered by way of private copying levies. As we reported here, the question of how the private copying exception applies to illegal content has been referred by the Dutch courts to the CJEU. Further the hardware providers argue that it is not right that the new levies should apply to all devices, including devices for professional use that are not used for private copying.
Private copying levies are always a touchy subject and such sudden increases were never going to be popular. Is the solution to make private copying illegal, as it is in the UK, and so abolish the levies? Or to implement one European-wide levy so that at least particular markets within the EU are not disadvantaged?

And will the Dutch move on to think about imposing levies on the cloud? 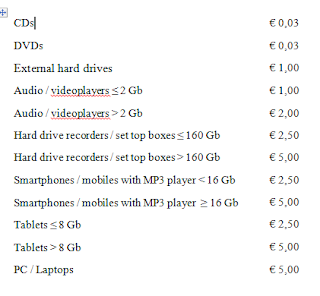 I actually think that's quite a fair and reasoned adjustment of the levy. Given how no digital piracy can be undertaken without a PC or laptop, a 5 Euro tax on all PCs seems more than proportional given the amount of revenue lost to piracy of both audio and visual works annually.

(And I'm a copyright sceptic!)

Perhaps this kind of tax needs to be built in to ready made products. Then it becomes a fee akin to the music streaming products 'hard bundled' into mobile phone contracts - people use them because they're there and copyright owners & publishers are rewarded, at least a little bit, down the line. The important thing to watch for is a fair distribution of royalties, because you know where most of the money usually goes!

@ Christopher. By analogy perhaps all car drivers should, arbitrarily, pay a levy on the price of a new car, on the basis that you need a car to commit a speeding offence. In fact let's go further and sentence them to prison as well, on the basis that you need to drive a vehicle to cause death by dangerous driving.
Taxing the majority for the misdeeds of the minority is not equitable.

Just to clarify, these levies are intended to cover the private copying exemption: in the Netherlands it is legal to make copies of music and films for friends and family, and these levies intend to compensate rightsholders for that loss. The levies do not cover file sharing or digital piracy which remains illegal. Although I have seen comments on various blogs implying that people are assuming that the levy means that they are free to download anything they like for free. Perhaps the Dutch government's PR team needs to up it's game!