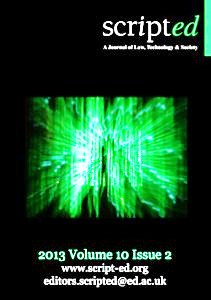 This blogger has always thought highly of SCRIPTed, a genuinely peer-reviewed journal which has provided much food for thought in the area of IP/IT.  The current issue (contents here), which has just been released, contains a special focus on open collaborative projects in which you will find the following:

"Drafting Options for Contributor Agreements for Free and Open Source Software: Assignment, (Non)Exclusive Licence and Legal Consequences. A Comparative Analysis of German and US Law", by Tim Engelhardt. According to the abstract:


"Free and Open Source Software (FOSS) has become so widespread that it is now used in virtually every type of device and is distributed in almost every market. Scores of FOSS projects offer their software and try to attract contributors and users. In this context, a key question that has become increasingly relevant is whether FOSS projects need to legally formalise the contribution process by using Contributor License Agreements or Contributor Assignment Agreements, and if so, how such agreements should be drafted [This is an interesting issue. Considering that GNU dates back to the early 1980s and that various variations on the FOSS theme have sprung up over the past three decades, it is quite striking how little litigation has been generated by the lack of legal formalisation -- certainly much less than early critics predicted]. This paper focuses on three general drafting options – assignments, exclusive or non-exclusive licenses – and analyses each of these options’ advantages and pitfalls. Given the global nature of FOSS, the paper adopts an international perspective by exploring two model jurisdictions that represent two contrasting legal systems and traditions: Germany, the drafter’s home country, with its typical continental-European legal approach; and the United States of America, a common law jurisdiction and globally the leading software-developing country".

"Internationalisation of FOSS Contributory Copyright Assignments and Licenses: Jurisdiction-Specific or “Unported”?" by Axel Metzger. According to the abstract:


"Some of the major Free and Open Source (FOSS) projects use contributory copyright assignments and licenses to clarify the owner­ship of developer’s contributions and to allow the project to grant sublicenses and enforce copyright claims in case of license violations. The paper gives an overview of typical provisions of these agreements and provides an analysis of the private international law principles applicable in Europe, United States, and Japan. As a conclusion, the paper suggests an internationalisation strategy for FOSS projects. FOSS copyright assignments and licenses should implement choice-of-law clauses to foster legal certainty for projects" [Given the fact that licences, being creatures of contract law, are inherently jurisdiction-specific, this is no mere academic speculation].


"This article discusses formal requirements in open source software contributor copyright assignment and licensing agreements. Contributor agreements are contracts by which software developers transfer or license their work on behalf of an open source project. This is done for convenience and enforcement purposes, and usually takes the form of a formal contract. This work conducts a [concise but very interesting] comparative analysis of how several jurisdictions [responses being received by some 16 of them] regard those agreements. We specifically look at the formal requirements across those countries to ascertain whether formalities are constitutive or probative. We then look at the consequences of the lack of formalities for the validity of those contributor agreements".

A lot of thought and effort has gone into these contributions; it is hoped that they will be duly appreciated.
Posted by Jeremy at 8:28 am