A Big Tag with Fries and a Can of Spray Paint for You?

There is yet another copyright infringement case about the use by a corporation of the work of a graffiti artist (see here, here, here and here). This time, it is purveyor of Big Macs and other calorific delicacies McDonald’s which has been accused of copyright infringement for using a graffiti without authorization when creating the décor of its new graffiti-themed restaurants in the U.K. and Asia. 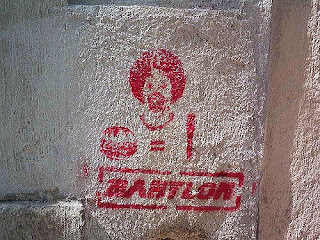 The protected work had been created by the late Dash Snow, and it is the administrator of his estate who filed the suit in the Central District of California, on behalf of her and Snow’s minor child. Mc Donald’s introduced these graffiti restaurants this year in the U.K., but they did not receive a unanimous warm reception (see here and here). Plaintiff saw the allegedly infringing reproduction in a London McDonald’s and notes that “Hundreds of McDonalds around the world use near-identical interior design.” Plaintiffs had asked McDonald’s to remove the art when they discovered the use in June 2016, but the fast food chain refused, which led to the filing of this suit. The case is Jade Berreau v McDonald’s Corporation, 2:16-cv-07394 (Central District of California).


Snow signed his artwork using the stylized signature of his pseudonym “SACE.” The complaint alleges that an image of a wall in a McDonald’s restaurant in London “includes a brazen copy of Mr. Snow’s work” (see Complaint p. 2). Plaintiff alleges that Snow’s work is prominently placed on the wall, and that it is “the only element created by a famous artist” whereas the “remaining graphic elements are comprised of generic anonymous shapes and scribbles.” The complaint also alleges that McDonald’s reproduced Snow’s work for in-store marketing material.


Plaintiff claims that McDonald’s infringed Snow’s copyright in his work. The graffiti had been painted by Snow on a New York wall and so it had been fixed in a tangible medium of expression. Plaintiffs filed a copyright registration for the work on September 17.


The complaint further argues that Dash Snow had “carefully avoided any association with corporate culture and mass-market consumerism,” that he was “diligent in controlling distribution channels of his work” and that “nothing is more antithetical to Mr. Snow’s outsider “street cred” than association with corporate consumerism— of which McDonald’s and its marketing are the epitome.” Therefore “Mr. Snow’s reputation and legacy have been irreparably tarnished, diminishing the value of his work” and that such unauthorized is deceptive because it is “ strongly suggesting that Mr. Snow endorses, sponsors, or is affiliated with McDonald’s and its products, causing (and substantially likely to continue to cause) mistake and confusion.” U.S. law provides only limited moral rights, but, under European moral rights laws, such a statement would support a claim of violation of the artist’s moral rights, which are perpetual.


Plaintiff also claims that, by placing Mr. Snow’s signature on the walls of its restaurants, McDonald’s has intentionally falsified copyright management information in violation of 17 U.S.C. § 1202 which forbids anyone to knowingly and intentionally, in order to induce, enable, facilitate, or conceal infringement, to provide false copyright management information. A similar argument had been made by graffiti artists Revok and Steel in their copyright infringement suit against Roberto Cavalli.


What is next? Another graffiti artist, Eric Rosenbaum, known as NORM, had filed a similar copyright infringement suit against McDonald’s last March, in the same court, the Central District of California, claiming copyright infringement, unfair competition, false advertising and misappropriation of likeness for having used one of his graffiti bearing his artist’s signature in McDonald’s restaurants in Europe and Asia. The case has settled, and so it is likely that it will be the case here as well.


Image is courtesy of Flickr user Manuel Faisco under a CC BY-NC 2.0 license.
Posted by Marie-Andree Weiss at 1:48 pm