Richard Prince was sued on November 16 by yet another photographer over the use of a photograph in his New Portraits series. The case is Eric McNatt v. Richard Prince, 1:16-cv-08896, Southern District of New York (SDNY).


Readers of this blog may remember that Richard Prince used various photographs protected by copyright to create his New Portraits exhibition. He had commented, cryptically, or nonsensically, whatever your mood is, below several photographs which had been uploaded by others on Instagram. He then printed the results on canvas to create a series of works, New Portraits, which has been shown in New York. Prince has been sued by some of the copyright holders of the original works (see here and here). One of these cases, Donald Graham v. Prince, is still pending at the SDNY.
This time, it is photographer Eric McNatt who is suing Richard Prince and the Blum and Poe Gallery for copyright infringement. The complaint alleges that Richard Prince reproduced a photograph taken by Plaintiff of Kim Gordon, a founding member and bassist of Sonic Youth, by downloading it from the web, where it had been published with a copyright notice, and uploading it on his own Instagram account. Prince has since deleted this account. Prince then wrote three lines of comments under the photograph:  “Portrait of Kim Gordon,” then “Kool Thang You Make My Heart Sang You Make Everythang Groovy” and finally added a string of music-related emojis. 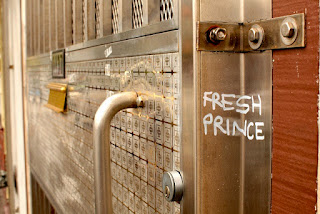 This Instagram post and its comments was then printed and added to the New Portraits exhibition, which was shown in the spring of 2015 by the Blum & Poe gallery in Tokyo and featured in the catalog of the exhibition.


Will TCA Television Corp. v. McCollum Influence the Outcome of this Case?


The Donald Graham v. Richard Prince case is still pending at the SDNY. On November 4, attorneys for Donald Graham sent a letter to Judge Sidney Stein from the SDNY, who is presiding over the case, to alert him of the recent TCA Television Corp. v. McCollum Second Circuit case (2nd Circ. Oct. 11, 2016), which, in their view, “undermines Defendants ‘motion to dismiss on fair use grounds.”


In TCA Television Corp., the author of the play Hand of God had been sued by the heirs of Abbot and Costello over the use of their famous “Who’s on First” routine. The main character of the play recites the routine verbatim in the play with his trusty (but evil) sock puppet acting as sidekick. Judge Daniels from the SDNY had dismissed the copyright infringement suit, finding the use of the routine in the play to be fair use. The Second Circuit affirmed, but on alternative grounds: the use of the routine was not transformative enough to be fair use, but the heirs had not proven that they owned the copyright in the routine.


Attorneys for Prince sent their own letter a few days later, where they argued that the holding in TCA Television is distinguishable from the case, that the TCA Television case is not even related to fair use and that thus “the entire discussion of fair use is dicta.” They also argue that the Second Circuit did not find the use of the routine to be fair because, according to the Court, “the extent of defendants’ taking is identically comedic to that of the original authors, that is, to have two performers expand on a singular joke in order to generate increasing audience laughter.”


Attorneys for Prince also argued in the letter, that, “[b]y contrast, Prince used Graham’s photograph for a highly transformative purpose: as a commentary on social media. This new meaning and message is apparent to any reasonable observer who looks at the artwork. “Prince’s attorneys also argued that “Prince’s transformative purpose [was] to provide a commentary on social media [and thus] required the incorporation of the entire Instagram post… to accomplish that purpose. “


Is the use of the McNatt Photograph Transformative Enough to be Fair Use?


What is transformative use? We still do not have a “so transformative it is fair use” test. However, the TCA Television case may influence the McNatt v. Prince case. If we consider that Prince’s purpose for reproducing Eric McNatt’s photograph of Kim Gordon was to comment on social media, as claimed by Prince’s attorneys in the Graham v. Prince case, then it is fair use under Cariou if Prince added something materially new or provided a different aesthetic. The Second Circuit had found in Cariou v. Prince that Prince’s use of Cariou’s photographs was fair use, because he had used them to create new works and had “employ[ed] new aesthetics with creative and communicative results distinct from Cariou.”


Judge Daniels from the SDNY had found in TCA Television that the use of the routine was fair use, explaining that “[t]he contrast between Jason's seemingly soft-spoken personality and the actual outrageousness of his inner nature, which he expresses through the sock puppet, is, among other things, a darkly comedic critique of the social norms governing a small town in the Bible Belt. Thus, Defendants' use of part of the Routine is not an attempt to usurp plaintiffs’ material in order to "avoid the drudgery in working up something fresh." Campbell, 510 U.S. at 580, 114 S.Ct. 1164. Nor is the original performance of the [r]outine "merely repackaged or republished." Authors Guild, Inc. v. HathiTrust, 755 F.3d 87, 97 (2d Cir.2014).”


The Second Circuit found that the use was not fair because it had not transformed the routine's aesthetic, it had appropriated the routine extensively, and “[n]o new dramatic purpose was served by so much copying” and “there is nothing transformative about using an original work in the manner it was made to be used.”


If we apply this to our case, then Prince must prove that he used the original work in a different manner than it was made to be used. Should we only look at the comments written by Prince to decide if the use is transformative enough to be fair, or at the ensemble, work and comments? In both ways, the Prince’s work could be considered fair use if proven to be a critique on the desperate banality of social media and social media comments. But is it?


As noted by the Complaint, “Kool Thang You Make My Heart Sang You make Everythang Groovy” is “a transliteration of lyrics to the 1960 song “Wild Thing,”written by Chip Taylor, except that the word “Kool” replaces the word “Wild.” “Kool Thing” is the title of Sonic Youths first major label record single.” As itself, this comment may not be original enough to be protected by copyright yet it is more creative than most social media comments. The emojis chosen by Prince, however, are quite banal and so their banality may comment on banality. Pass the aspirin.


Image is courtesy of Flickr user torbakhopper under a CC BY 2.0 license.
Posted by Marie-Andree Weiss at 1:18 pm