Han Solo cunningly used his Sabbac skills to win his spaceship, the Millennium Falcon, from Lando Calrissian. The game was played, a long time ago, in a galaxy far, far away, using cards, while we seem to play in the 21st century mostly on our phones.


Defendant Ren Ventures also owns the “Sabacc” U.S. trademark, in class 09 and 41, for computer games software and entertainment services. As this blog is about copyright, I will not discuss the trademark infringement claim in detail.


The complaint alleges that Defendants used protected works owned by Plaintiffs, such as  images and quotes from movie dialogues, on their website, Facebook page, and other social media sites in order to promote their app, such as “From a Cantina far, far away to your mobile device, welcome to the world’s largest Sabacc site.” Defendant’s “Ren Ventures” name is inspired by the Star Wars The Force Awakens character Kylo Ren. 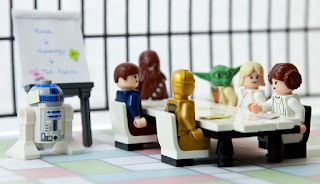 What is the Sabacc game?


“Sabacc” is a fictional card game which first appeared in the 1978 draft screenplay, Star Wars Episode V: The  Empire Strikes Back, under the name “Sabacca” , which was later changed to “Sabacc.” The game then appeared in three novels about Lando Calrissian published in 1983. One of these novels, Lando Calrissian and the Mindharp of Sharu, describes Sabacc’s rules, as stated as such in the complaint:


“The Sabacc deck comprises a number of face cards (including the Idiot, the Evil One, and the Star) and four suits of fifteen pip cards (Flasks, Sabers, Staves, and Coins). It is a betting game in which the goal is to finish with a hand as close as possible to positive or negative 23 without going over. At various intervals, the cards in a player’s hand change at random (the “Sabacc shift”) unless they are placed in an “interference field” that reveals their value to the other players.


The only hand that defeats a hand of positive or negative 23 (“Pure Sabacc”) is a hand comprising the Idiot, a 2 card, and a 3 card (the “Idiot’s Array).”


A Sabacc card game was published by Plaintiffs in 1989 and again in 2015. The game was also referenced in Star Wars comic books and in the television series Star Wars Rebels “Idiot’s Array” episode in 2015.


Can a card game be protected by copyright?


Could these rules be protected by copyright? Section 102(b) of the Copyright Act excludes protection of ideas, procedures, processes, systems, methods of operation, concepts, principles, or discoveries, “regardless of the form in which it is described, explained, illustrated, or embodied in such work.”


However, the rules themselves cannot be protected, as explained by the Southern District Court of Texas in DaVinci Editrice SRL v. Ziko Games because, “[u]nlike a book or movie plot, the rules and procedures, including the winning conditions, that make up a card-game system of play do not themselves produce the artistic or literary content that is the hallmark of protectable expression.”


Can a third party register as a trademark a word protected by copyright?


The answer if no, but… Is it possible for a single word to be protected by copyright? Titles, names, short phrases, and slogans are not protected by copyright, and it can be argued that ‘Sabacc’ is the name of a game. Plaintiffs do not claim that they own the copyright in ‘Sabacc’, but that the app:


“mimics the fictional Sabacc game… as well as the physical Sabacc card games previously licensed and authorized by Plaintiffs. The names and values of the suits (Coins, Flasks, Sabres, Staves), face cards (e.g., the Evil One, the Star), and hands (e.g., Pure Sabacc, Idiot’s Array) are identical.”

Image is courtesy of Flickr user Camille Rose under a CC-BY-NC-ND 2.0 license.

Posted by Marie-Andree Weiss at 5:52 am