Parody as a defence: an academic speaks 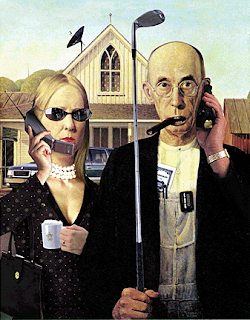 Next Thursday, 29 April, 6pm to 7.30pm, Professor Ronan Deazley (Glasgow University) is delivering the CIPPM Annual Lecture, "Parody, and its Discontents", down on the sunny south coast of England at Bournemouth University.
Right: some works just lend themselves to parody -- American Gothic has been the subject of several cultural and social comment parodies, of which this is one. Grant Wood's original is here. Some other parodies can be seen here.
According to the abstract,

"In 2006 the Gowers Review of Intellectual Property made a series of recommendations for reforming the intellectual property regime to better serve the interests of both consumers and industry. Among the proposed recommendations was that an exception for parody be introduced within the Copyright Designs and Patents Act 1988. In January 2008 the Intellectual Property Office (the IPO) launched the first part of a two-stage consultation process entitled Taking forward the Gowers Review of Intellectual Property: Proposed changes to copyright exceptions. As part of that consultation process the IPO proposed a "fair dealing style exception" for parody, and sought views on whether a new exception should be introduced as well as what form it might take.

It invites the IPO to reconsider its decision not to recommend the introduction of a specific exception for parody within the UK".

Professor Deazley has authored an impressive 33-page response to the Second Stage proposals on behalf of the Intellectual Property Foresight Forum (IPFF), which you can read here.
Please note (say the organisers): The topic of the lecture has been changed in response to recent policy developments. Full details of the lecture can be found here. To reserve a place, please email Denise George.
Posted by Jeremy at 9:39 am

Now here's a copyright exception that the 1709 bloggers have a clear vested interest in supporting. I hereby sign an affidavit to declare this!