You want me to pay? 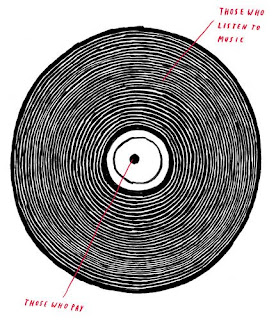 The New York Times Magazine had an interesting feature this weekend about the efforts of BMI to collect music royalties from bars, restaurants and other commercial venues around the United States. Apparently, as a society, we believe that creators of music deserve to hold and exploit copyrights in their works, but we really, really, really don't want to pay to use those copyrights.

Broadcast Music Incorporated, otherwise known as BMI … is a P.R.O., or performing rights organization; P.R.O.’s license the music of the songwriters and music publishers they represent, collecting royalties whenever that music is played in a public setting. Which means that if you buy a CD by, say, Ryan Adams, or download one of his songs from iTunes, and play it at your family reunion, even if 500 people come, you owe nothing. But if you play it at a restaurant you own, then you must pay for the right to harness Adams’s creativity to earn money for yourself. Which leaves you with three choices: you can track down Ryan Adams, make a deal with him and pay him directly; you can pay a licensing fee to the P.R.O. that represents him — in this case, BMI; or you can ignore the issue altogether and hope not to get caught.

P.R.O.’s like BMI spend much of their energy negotiating licenses with the biggest users of music — radio stations, TV and cable networks, film studios, streaming Internet music sites and so on. But a significant portion of BMI’s business is to “educate” and charge — by phone and in person — the hundreds of thousands of businesses across America that don’t know or don’t care to know that they have to pay for the music they use. Besides the more obvious locales like bars and nightclubs, the list of such venues includes: funeral parlors, grocery stores, sports arenas, fitness centers, retirement homes — tens of thousands of businesses, playing a collective many billions of songs per year.

Most Americans have no problem with BMI charging for its music — except when they do. As Richard Conlon, a vice president at BMI in charge of new media, put it: “A few years back, we had Penn, Schoen and Berland, Hillary [Clinton]’s pollster guys, do a study. The idea was, go and find out what Americans really think about copyright. Do songwriters deserve to be paid? Absolutely! The numbers were enormously favorable — like, 85 percent. The poll asked, ‘If there was a party that wasn’t compensating songwriters, do you think that would be wrong?’ And the answer was, ‘Yes!’ So then, everything’s fine, right? Wrong. Because when it came time to ask people to part with their shekels, it was like: ‘Eww. You want me to pay?’”

This attitude tends to stem from the fact that music is freely available, legally or otherwise. Once a business owner has the music, say, by paying for and downloading songs from iTunes for personal use (or downloading them illegally from another source), he generally doesn’t understand the need to pay licensing royalties (or want to) for using the music at his business. According to the feature, BMI licensing executives are frequently assaulted, verbally and sometimes physically, when visiting local sites that have not yet licensed the music they play. BMI strategizes its copyright royalty collections operations based on the viewpoint that people believe that copyrights should be protected but that they personally don’t want to pay for a license.

BMI knows it will be tough to collect from every business that uses BMI-managed music and owes royalties, but they also know they have the law on their side. And, having never lost a dispute in litigation, BMI is willing to take action when necessary in order to protect the rights of its artists. Often, though, business owners relent and negotiate a license fee that fits within their budgets.

The Internet has been a boon to PROs seeking to collect royalties on the music copyrights they represent. Using the Internet, for example, a BMI licensing executive can search business listings within his region to keep tabs on new businesses, as well as shuttered ones. Then he can pick up the phone and ask the business owner to agree to a reasonable license based on expected use. BMI claims that its agents make more than one million phone calls a year in order to secure licenses from as many domestic businesses as possible.

In addition, new technologies are making it easier for BMI to close licensing deals and maintain or increase its revenues year-over-year:

It is worth noting that during the years the recording industry lost nearly 60 percent of its income, BMI and its competitor ASCAP had steady increases in profits. BMI has done so by going after how people use music commercially, regardless of medium. As the president and chief executive of BMI, Del Bryant, likes to say, “You have to be in the future a little bit.”

In BMI’s case, this has meant leapfrogging from AM radio to FM, from movies to cable to digital radio to streaming to (once-illegal) downloading companies like Napster. (BMI began working on a deal with Napster about streaming music even before it sorted out its legitimacy.) They also signed with Rhapsody, the online streaming site, when the company was in its infancy. The trick, says Bryant, is to understand the content world as an ecosystem. When a new player comes along, don’t kill it, make a deal with it. With each new medium, he says: “We made agreements that weren’t that heavily monetized, and not that heavily binding because we didn’t know if it’d be around for long or how it would evolve. They were place keepers, ways to get us working together. And they slowly solidified. It’s all a question of pricing. The system has to serve everyone’s purposes.”

Richard Conlon echoed what Del Bryant said. “We’re not about shutting things down.” he told me. “We’re about nurturing markets. We don’t want people NOT to use it. We know the market is fractionalizing. You wanna take our music and stream it and have electronic whatevers that play when you stick a chip into something or somebody? Go ahead! Do it! Just pay us!”

… While the rest of the content world worries that technology will be the end of content, P.R.O.’s are banking that technology will save it. BMI has developed a system called Blue Arrow that deploys the same technology as iPhone’s Shazam to identify music. (ASCAP uses a similar system called Mediaguide.) These systems can listen to Internet sites, as well as radio and TV stations around the world and identify, in two seconds, virtually any piece of music being played — not just American, but Turkish, Arabic, Chinese, Korean, Latin, Japanese and so on. The Blue Arrow database has a capacity of 500 terabytes (one thousand gigabytes each) of music, and can recognize eight million songs. About 3,000 new songs are added each day.

This technology has not only aided BMI in negotiating licenses from traditional uses of music, but has also clued them in to other uses of music that require copyright royalties, including a type of use they call “nonsong performances.” These nonsong performances include background music, sampling within another artist’s new music, and station identifier music, all of which should generate a royalty obligation with each use of the copyrighted material. It would have been impossible for BMI (or ASCAP) licensing executives to know about, let alone track down and seek payment for, such uses. But the proprietary technologies now allow executives to track these uses instantaneously.

Still, most people expect their music to be free – and they’re willing to seek out free illegal sources. But BMI's education and collection efforts, as well as those of the other PROs, are making big strides to ensuring that copyright owners receive the compensation they are due. Hopefully BMI's licensing executives will endure fewer spitballs and death threats in the years to come as they continue advocating for and collecting royalties on behalf of the artists they represent.
Posted by Miri Frankel at 10:45 pm