Circus Globus: an explanation from Romania 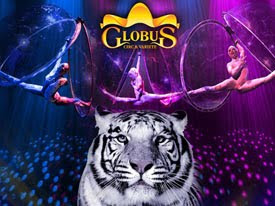 In "Communication questions: Romania asks the oracle", the 1709 Blog posted this item on a mysterious reference from Romania of questions in need of a preliminary ruling from the Court of Justice of the European Union. The case in question is Case C-283/10 Circ & Variete Globus Bucureşti v Uniunea Compozitorilor şi Muzicologilor din România - Asociaţia pentru Drepturi de Autor - U.C.M.R. - A.D.A. We had no idea what this was all about and asked our readers for help.

Our sincerest thanks are now due to Tudor Chiuariu (Senior Partner, Chiuariu & Associates, Bucharest), who has written the following:

"The court of first instance ordered the defendant Circus Globus to pay the claimant UCMR-ADA, a copyright collective management organization, an amount of about EUR 235 000 as remuneration for copyright musical works “publicly communicated” during the circus and cabaret shows of Circus Globus between May 2004 and September 2007. There is no information publicly available on the court’s website as to whether the communication to the public of the musical works included live performances, the use of phonograms, or both.

The court of second instance rejected the defendant's appeal and upheld the decision of the first instance. A second appeal was filed by the defendant, now pending before the High Court of Justice and Cassation (HCJC), in which only the application of the law to the specific case is discussed (not the merits of the case). Before taking the final decision, the HCJC referred the following questions to the ECJ:

In the event that point (b) represents the correct meaning, does Article 3(1) of the directive permit Member States to make statutory provision for the compulsory collective management of the right to communicate musical works to the public, irrespective of the means of communication used, even though that right can be and is managed individually by authors, no provision being made for authors to be able to exclude their works from collective management?"

Communication to the public enjoys a very broad definition in Romanian copyright law (Art. 15(1) of Law no. 8/1996 as amended):

“any communication of a work, effected directly or by any technical means, in a place open to public or in any place where a number of persons are gathered exceeding the normal circle of a family and its relations, including the performance on stage, reciting or any other kind of public performance or direct presentation of the work, … , the presentation in a public place by sound or audiovisual recordings, as well as the presentation in a public place by any means, of a radio broadcasted work. It is also considered to be public, any communication of a work by wire or wireless means, effected by making it available to the public, including through Internet or other computer networks, in such a way that any member of the public may access it from any place and at any time individually chosen.”

The second national legal provision which is relevant is Art. 1231(e) of the Romanian copyright law, which imposes compulsory collective management for the exercise of the right to the public communication of musical works (except for public projection of cinematographic works).

This legal provision entitles UCMDR-ADA to claim the remuneration as explained above in the absence of a contractual relationship with the original right owners, their right to exclude their works from collective management being denied by law.

Apparently the HCCJ aims to establish whether there is any incompatibility with the InfoSoc Directive in the national legal definition of the right to public communication of a work and in providing for compulsory collective management for the exercise of this right with respect to musical works.

It is worth mentioning that Art. 1231(e) has been the subject of an objection of non-constitutionality raised in another case involving UCMR-ADA. The author of the objection argued that imposing compulsory collective management for public communication of musical works irrespective of the means of communication (direct or indirect), is contrary to several articles of the Constitution related to the protection of private property, freedom of commerce, fair competition and copyright (see for example the situation where the performer is at the same time the copyright owner and UCMR-ADA still acts as an intermediate in the management of his rights).

The objection was dismissed and the Constitutional Court, inter alia, considered itself not competent to rule on the interpretation of the right to public communication as understood within the context of the InfoSoc Directive (i.e. whether the interpretation includes the case where the public is present at the site where the communication originates). This might explain the wording of the first question referred by the HCJC to the ECJ".