It is a fact universally acknowledged (at least among comparative copyright lawyers) that moral rights and common law countries aren’t the happiest of bedfellows. When the United States acceded to the Berne Convention in 1988, one might have expected them to introduce comprehensive moral rights protection in accordance with Article 6bis Berne Convention. What we did get was the Visual Artists Rights Act 1990 (VARA), incorporated into the Copyright Act as § 106A. VARA bestows moral rights only on the authors of specific kinds of works, namely

“paintings, drawings, prints, sculptures, still photographic images produced for exhibition only, and existing in single copies or in limited editions of 200 or fewer copies, signed by the artist.”

As that leaves the overwhelming majority of works out in the cold, the cases where § 106A is invoked are few and far between. However, a highly interesting lawsuit relying on § 106A is currently before the United States District Court for the Middle District of Pennsylvania. 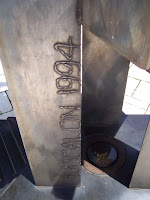 The Plaintiff is David Ascalon, a renowned sculptor (http://en.wikipedia.org/wiki/David_Ascalon). The Defendants are 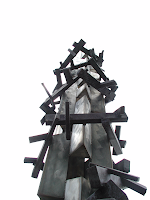 the Department for Parks and Recreation in Harrisburg, Pennsylvania (“DPRH”), the Jewish Federation of Greater Harrisburg (“Federation”), and David Grindle, an artist and/or restorer. In the early 1990s, the Federation and the DPRH decided to create a memorial site to honour the victims of the Holocaust. Mr Ascalon submitted the winning entry for a commemorative sculpture, which was duly made and erected on the site. It consisted of a shining stainless steel core in the shape of a Star of David, around which was wrapped a serpentine shaped structure of a darker and wearing type of steel. The shining stainless steel, suggesting permanence, represented the Jewish people and their endurance under unimaginable suffering. The rusting steel structure represented the barbed wire fences of the Nazi death camps, implying oppression, decay and misery. 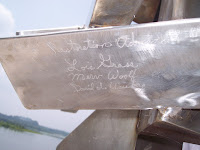 In 2003, there was some concern as to the state of the rusting steel part of the sculpture and whether restoration work would be required. According to the statement of claim (http://www.courthousenews.com/2010/07/28/Holocaust.pdf), Mr Ascalon 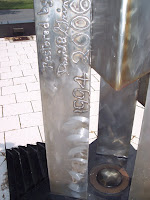 offered to carry out any necessary restoration work, but was eventually not taken up on that offer. Amazingly, in 2005 he received a cease and desist letter from the Federation, demanding he stop referencing the sculpture. In 2007 he learned that, unbeknownst to him, the sculpture had been altered in several ways. Not only had the dark steel structure been replaced by a structure of the same shining stainless steel as the core structure, but his name had been erased from the sculpture as well. Instead, it sported the caption “Restored by David Grindle 2006” and the names of the “Restoration Advisors.” 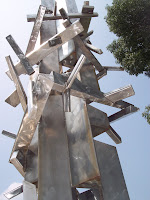 The Statement of Claim describes the effect thus:
“The modification of the sculpture has changed it so that now the same shiny stainless steel that represents the enduring Jewish people is also used to depict the Nazi regime and atrocities of the Holocaust. This alteration is abhorrent, and runs completely contrary to the core vision of the Memorial, which was based on the notion of creating a striking and stark visual contrast between the Jewish people and their Nazi oppressors. The sculpture as modified now creates a visual equivalency between good and evil, which is a mutilation and bastardization of the artwork and its purpose.”

Looking at the pictures, I must say I agree. Sadly, the case might be less clear-cut than my civil heart wants to believe: According to § 106A(a)(2), the author of a work of visual art

“shall have the right to prevent the use of his or her name as the author of the work of visual art in the event of a distortion, mutilation, or other modification of the work which would be prejudicial to his or her honor or reputation.”

I suppose by grinding off Mr Ascalon’s name the Defendants successfully avoided violation of § 106A(a)(2). Nice.

Distortion? Oh yes. Mutilation? I should think so. But now the old Article 6bis BC problem raises its ugly head once more: Does “prejudicial to his honor or reputation” only refer to modifications or also to distortions and mutilations? Most courts and commentators agree that the better view is that the prejudice requirement applies in all cases. VARA does not define the terms “prejudicial,” “honor,” or “reputation,” but I have no doubt that it would be harmful to Mr Ascalon’s honour and reputation in artistic circles if anyone were led to believe that he agreed to the changes made to his work. But since his name does not appear on the sculpture anymore (and he is demanded to cease and desist from referencing his work), is the modified sculpture still capable of being prejudicial to his honour or reputation? Or can anyone distort and mutilate a work to their heart’s content as long as they at the same time disassociate the author from it? Gilliam v American Broadcasting Company 538 F.2d 14 (1976) springs to mind, where Judge Gurfein pointed out that the Lanham Act would do nothing for the Plaintiffs if the Defendants had clearly labelled the truncated versions of “Monty Python’s Flying Circus” as not in keeping with what the Plaintiffs had intended. § 106A(a)(3)(B) might not be the answer either. While no prejudice to honour and reputation is required, as the work, though probably of “recognized stature”, arguably was not destroyed but merely damaged (I assume it is not beyond repair).
A further complication stems from § 106A(c)(2), pursuant to which the modification of a work of visual art which is the result of conservation is not a destruction, distortion, mutilation, or other modification unless the modification is caused by gross negligence.” It will be interesting to see what the court makes of this case. Moral rights are an extension of the author’s personality and VARA is supposed to protect “both the reputation of certain visual artists and the works of art they create” (House Report, 1990 U.S.C.C.A.N. at 6915). In my view that implies rather more than a law against misrepresentation like the Lanham Act, and it should not be possible to circumvent § 106A(a)(3) by removing the author’s name and otherwise trying to disassociate him from his work.
(Source of photographs: http://img823.imageshack.us/cpreredodetail.jpg/)
Posted by Monika at 1:34 pm

Once again a visual artist’s work has been disrespected by a local government body. These avoidable incidents are bound to be repeated unless the respectability of artists and their work becomes a part of everyday conversation in households across the U.S. A similar case invoking the Visual Artists Rights Act of 1990 or VARA is winding its way through the court. Chapman Kelley vs. Chicago Park District will have been in the Seventh Circuit Court’s lap for a year on September 10. That day will mark the first anniversary since oral argument (promising to Kelley, we are told) was heard in Chicago about the destruction of his 66,000 sq.ft. public artwork “Chicago Wildflower Works” (1984-2004), which was deemed by the court to be either a painting or sculpture. A landmark appellate decision is imminent. Another important VARA case still in progress on the east coast is the installation artist Christoph Buchel case involving the Massachusetts Museum of Contemporary Art. The integrity of Buchel’s “Training Ground for Democracy” is the focus of that dispute. David Ascalon is to be commended for standing up for his moral and personality rights as set forth in VARA. The artistic community will be better off as a result of his bold action. John Viramontes – Council for Artists Rights

Actualy this sort of thing is not all that new . A minor Italian mannerist artist spent most of his professional life derided as the 'painter of underpants' because in the purer than thou atmosphere of the counter reformation he was employed by the Vatican to paint over the rude bits of many of Michelangelo's more well endowed figures.
Not sure that law can really do that much with the breathtaking but all to common petty boorish rudeness of the groups that wrecked their own communities monument. I would guess that there was a faction in the community that were never happy with the original choice. There are plenty of opposite examples of architects /artists blocking needed modifications to public buildings . The Moral rights resulted in years of delay on extensions to the National Gallery of Australia.
Personally- once I have sold a picture I accept that the owner can do with it pretty much as he pleases.