Tug of love over Davros: the battle-lines are drawn 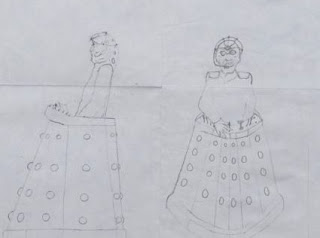 Lee Curtis has sent this link to a Daily Mail article, "BBC sued over Who first drew the evil Dalek mastermind Davros".  The claimant, Steven Clark, who is now 51, says he invented Davros for a competition run by the now defunct TV Action magazine in 1972. According to the article,


" ...his drawing – a pencil sketch coloured in with felt pens [depicted, right] – showed a ‘half-man half-Dalek’ with an additional eye in the centre of his forehead, a headset, epaulettes, a withered left hand and finger-like switchgear on the Dalek base. ...

He is demanding the Corporation pay damages, or a sum equivalent to the profits generated from the character over the years. This could run into many thousands of pounds.
... The character is so popular it is sold as toy figures, with remote-controlled models costing upwards of £20 each. ...

Mr Clark, who says he kept handwritten copies of his entry, didn’t win the contest – which had a colour television as top prize – and heard nothing from the judging panel. But three years later his disappointment turned to anger when he saw a brand new episode of Doctor Who called The Genesis Of The Daleks. The episode, regarded as a classic by fans, introduced viewers to a new villain called Davros, but to Mr Clark the character looked almost identical to the one he had sketched.

... Steven was 16 when the episode was aired. He couldn’t believe his eyes when he saw his creation on screen. It was a mixture of emotions. He was excited, confused and angry.’ The teenager, who by this time was working in his local branch of Halfords, contacted solicitors but it went no further because he had lost the copies of the competition entry. However, 20 years later, he found them hidden in a set of family encyclopedias. He wrongly believed too much time had passed for another claim, although over the years he has sent several letters to the BBC asserting his rights over the character.

... Experts believe that ...Mr Clark can ... earn tens of thousands of pounds in compensation. One legal source said: ‘He is asking for damages or a pound-for-pound equivalent for all the profits generated by the character since he was introduced to viewers in 1975.

... Last year, BBC Worldwide identified the huge overseas success of Doctor Who as one of the reasons it had notched up record profits of £140 million ...".

To the casual observer there appears to be a not inconsiderable degree of similarity, as the illustrations show, though the 'Dalek' element of the two pre-existed the competition since the first Daleks made their TV debuts as long ago as December 1963.  One topic that the news report doesn't mention is the terms of the competition and whether they might have required the assignment of copyright, or at least a licence, as a condition of entry -- in which case the old question of infant's relief and whether a child back in 1972 could have divested himself of copyright in a situation which could not be said to be for his future benefit.
Posted by Jeremy at 10:57 am

Assuming he could establish ownership of his drawings and that they had been copied by the BBC, what has the BBC done that would not be within the defence provided by section 51 of the Copyright Designs and Patents Act 1988? (We know from Lucasfilm that neither props nor toys are copyright works, so the making of props and toys would be within section 51.)

If he could establish ownership and prove copying, and overcome the hurdle of limitation of actions, he could recover in respect of infringements under the Copyright Act 1956 which were committed before s.51 came into effect.

Who created the original dalek design ?- without the dalek lower half, the top half would just be a pretty standard space opera sort of figure get up ,no?

In response to John R Walker's post, Terry Nation described the appearance of the Daleks in his original script but the television prop was designed by BBC designer Raymond Cusick. There has been activity surrounding Ray's contribution but I believe his rights to the design were dismissed by the BBC as he was on salary at the BBC at the time. I believe there is copyright for the Dalek design but I am not sure whether the BBC and/or the Terry Nation estate possess this.