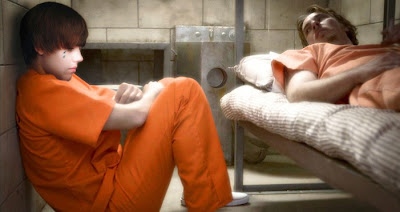 Fight For the Future, a new US campaign group, has launched a series of photographs showing an arrested and then imprisoned Justin Bieber, on the grounds that the now unfringed pop sensation would have been arrested and possibly imprisoned at the start of his career if the provisions of U.S. Senate bill S. 978 had then been US law – on the basis that Bieber’s rise to fame began with YouTube videos of the pocket rocket singing cover versions of popular songs.

Reports say the new bill will amend the criminal penalty provisions for criminal copyright infringement would make it a felony to stream unlicensed content ten times during any 180-day period and that and has a total economic value, either to the copyright holder or the infringer, of at least $2,500. The Bill (link below) has the support of the nearly 50 entertainment industry organizations, including the Recording Industry Association of America (RIAA) and the Motion Picture Association of America (MPAA). It is opposed by the Electronic Frontier Foundation and the Entertainment Consumers Association, among others. The Bill’s sponsor, Amy Klobuchar told reporters “The Bill is not intended nor does it allow law enforcement to prosecute people who may stream videos and other copyrighted works to their friends without intending to profit from the work of the copyright owner. It also does not allow prosecutors to go after individuals that innocently post links on their blogs to copyrighted protected works.”

FFTF say this about what they want from copyright:

“What people want from technology is usually pretty clear...

People love huge open libraries of music, books and video. They don't like censorship and legal landmines that get you sued for making amazing things. They love privacy and open platforms to create and invent. They're happy to pay for good stuff, but hate being coerced to pay for mediocrity and middlemen.

And people are right to want all these things, even when governments and corporations, with their own narrow interests, try to paint this new, expansive cultural freedom as dangerous or destructive. Our goal is to make the public's interest vividly clear, so clear that not even the most powerful lobbyists and smartest monopolies can destroy it.

We're living during a global shift as big as the industrial revolution. Because of the internet, our future will work very differently than the world our parents and grandparents created. We, as a society, are literally building a new world. Fight for the Future is here to bring the most essential human values back into the debate about how society uses technology. We believe there's hardly anything as important as ensuring that our shared future has freedom of expression and creativity at its core.
To do it, we need your help. If you have ideas, tell us. If you care about this stuff too, follow us in whatever way’s best for you (email's best for us). We’ll be gentle on your inboxes, and we’ll try our best to only send things that are awesome. When we do, share it. Hard. Popularity and passion make good ideas dangerous to special interests.

We're friends with EFF, Public Knowledge, FSF, Creative Commons, Demand Progress, Mozilla, Question Copyright and many more. We care passionately about making real concrete change, and we are here to be successful. Plus we're hiring.

To be a bit more concrete, we're asking:

• After spending thousands of years building libraries of donated books, why do governments try to tear them down when they happen spontaneously online?
• Why can't I give money directly to every musician I like, instead of paying Apple or Spotify and leaving virtually nothing in the pockets of the artists?
• Why does the US pay so much for cellphone service? And for slow internet?
• How is it possible that singing "Happy Birthday" in public is still illegal, and why does anyone stand by these laws?
• Will every kid growing up in every developing country have access to every book ever made, as soon as they get a smartphone? Or will the books cost $12, an impossible expense for a poor kid?
• Why have we all been sitting idly while the movie and music lobbyists have been systematically advancing legislation that strips freedoms, blocks innovation, and exclusively advances Hollywood's financial agenda? “