A matter of days after the Google Books case between Google and Association of American Publishers settled, comes the decision of the District Court of New York in HathiTrust. In this case the Authors Guild claimed that digital copies made by Google and the HathiTrust were infringing. Litigation against Google is proceeding separately, however in respect of the actions of the HathiTrust the District Court of New York has held that:

- The rights granted to libraries under s.108 of the US Copyright Act (the right to make a limited number of copies of certain works for specified purposes) do not preclude a library from relying on fair use as a defence; 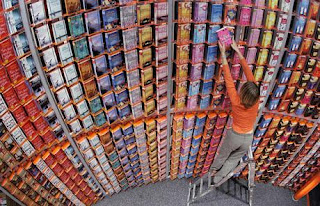 - Converting hard copy texts into digital texts is transformative use as the copies serve "an entirely different purpose than the original works"; that purpose being superior search capabilities rather than actual access to the material. The search capabilities of digital texts have given rise to new methods of academic inquiry such as text mining;


- The use of digital copies to facilitate
access for print-disabled persons is
transformative; and
- HathiTrust's activities are fair use.

The HathiTrust entered into agreements with Google which allowed Google to create digital copies of works in the various universities' libraries in exchange for which Google provided digital copies to HathiTrust.


The HathiTrust partnership is in the process of creating "a shared digital repository that already contains almost 10 million digital volumes, approximately 73% of which are protected by copyright." After digitization, Google retains a copy of the digital book that is available through Google Books, an online system through which Google users can search the content and view "snippets" of the books. Google also provides a digital copy of each scanned work to the relevant universities, which includes scanned image files of the pages and a text file from the printed work.  According to the Authors Guild, this process creates two unlawful copies of the original.
After Google provides the universities with digital copies of their works, the universities then "contribute" these digital copies to the HathiTrust Digital Library. Authors Guild therefore claimed that  in total, twelve unauthorized digital copies were created during this digitization process.
Google's use of the digital works is the subject of a separate lawsuit.

First it is interesting to note that this is a summary judgment: in order for the case to be dismissed, the HathiTrust had to show that there was "no genuine issue of material fact" as to whether their use was fair. Judge Baer found the Authors Guild's arguments to be without merit and granted the HathiTrust's motion for summary judgment on the basis that the HathiTrust's actions are protected under fair use.

Before examining each of the fair use factors, which are set out at s.107 of the US Copyright Act, Judge Baer considered the Authors Guild's argument that fair use should not apply at all as it is excluded by s.108 which accords libraries the right to make a limited number of copies of certain works for specified purposes. However s.108 explicitly states that "[n]othing in this section . . . in any way affects the right of fair use as provided by section 107." Judge Baer said that: "In spite of the clear language that Section 108 provides rights to libraries in addition to fair-use rights that might be available, Plaintiffs argue that I should find that the Section 107 fair-use defense is precluded by Section 108 in this case", before going on to conclude, seemingly without much difficulty, that fair use was available as a defence.


Purpose and character of the use
The first fair use factor considers the "purpose and character of the use, including whether such use is of a commercial nature or is for non-profit educational purposes." Judge Baer found that the digital scanning project in this case was  undertaken with several goals in mind: (1) it allows scholars to identify relevant works more efficiently - this tilts the first factor in HathiTrust's favour; (2)  it helps the HathiTrust preserve its book collections from wear and tear, loss and theft (as well as from natural disasters); and (3) it provides print-disabled individuals with "access to the wealth of information within library collections" - this is, according to Judge Baer a transformative use.


Nature of the copyrighted works
US case law says that "[S]ome works are closer to the core of intended copyright protection than others." (Campbell), which has been interpreted to mean that copying factual works is more likely to be fair use than copying creative works (Blanch v. Koons).


In this case the Authors Guild identified 116 allegedly infringing works of which 76 percent of the were fiction. However in the digitised library as a whole, approximately 9 percent of the works consist of prose fiction, poetry and drama. These numbers appear however to have been disregarded by the judge who held that: "Because the use is transformative, intended to facilitate key-word searches or access for print-disabled individuals, the second factor is not dispositive."
Amount of the work copied
The third fair use factor considers whether the amount of copying was reasonable in relation to the purpose.  The question is whether "no more was taken than necessary" (Campbell). With that in mind sometimes it is necessary to copy entire works: in this instance entire copies were necessary to fulfill the HathiTrust's purpose of facilitating searches and giving access to print-disabled individuals.


Impact on the market for or value of the works
The fourth factor examines "whether the secondary use usurps the market of the original work." Where a use is non-commercial, as it is in this case, the claimant has to show "by a preponderance of the evidence that some meaningful likelihood of future harm exists" (Sony). Judge Baer held that the Authors Guild failed this test.


The Authors Guild argued that each digital copy of a book represents a lost sale as it might otherwise have been bought through legal channels. Judge Baer comments that this argument ignores the fact that purchase of an additional copy would not have allowed either full-text searches or access for the print-disabled individuals, two transformative uses that are central to the digitisation project.
The Authors Guild's second argument was that the HathiTrust "expose[d] Plaintiffs' property to immense security risks that have the potential to cannibalize the book market through . . . widespread internet piracy." Their expert was however not able to substantiate this and therefore the judge held that the "unsupported argument fails to demonstrate a meaningful likelihood of future harm."


Finally, the Authors Guild argued that "Defendants activities will harm Plaintiffs by undermining existing and emerging licensing opportunities" such as a "collective management system [which would] permit certain of the activities of the Defendants in this case while providing compensation to copyright owners." Unfortunately the Authors Guild admitted that it could not identify "any specific, quantifiable past harm, or any documents relating to such past harm" leading the judge to hold that their argument about a potential market was "conjecture".
The HathiTrust offered substantial evidence that it would be prohibitively expensive to develop a market to license the use of works for search purposes, access for print-disabled individuals, or preservation purposes.

In weighing up the fair use factors, with the aim of copyright law of "promoting the Progress of Science" in mind, Judge Baer considered that the enhanced search capabilities, the protection of the HathiTrust's fragile books, and the unprecedented ability of print-disabled individuals to have an equal opportunity to compete with their sighted peers protect the copies made by the HathiTrust as fair use. Judge Baer summed up by saying:


"Although I recognize that the facts here may on some levels be without precedent, I am convinced that they fall safely within the protection of fair use such that there is no genuine issue of material fact. I cannot imagine a definition of fair use that would not encompass the transformative uses made by Defendants' [Mass Digitisation Project] and would require that I terminate this invaluable contribution to the progress of science and cultivation of the arts that at the same time effectuates the ideals espoused by the [Americans with Disabilities Act]."
Given that the digitisation project is not for profit, so authors are not losing sales of books, this seems to be an entirely rational and pragmatic decision which takes into account how we use our ever-evolving technology as well as the needs of partially-sighted readers. Perhaps it is a wake-up call to publishers that they need to adapt to use technology in such a way that there is no need for them to bring claims like this one.

***14 November 2012: by way of update the Authors Guild has notified the court that it will appeal Judge Baer's decision in this case.
Posted by Unknown at 6:21 pm

Given that it is a relatively small step from what the Hathi Trust are doing to the similar arguments from the likes of the British Library with regard to orphan works, with decisions like this, assuming it is upheld on appeal*, the US won't need any orphan work legislation.

*It seems inconceivable this won't go to appeal.

Fair use is infinitely preferable to compulsory collective licensing.

Just wondering re ebooks, they are already searchable digitised products, would a library be able to lend out multiple copies of a eBook they had purchased a single copy of?

"Given that the digitisation project is not for profit, so authors are not losing sales of books..."

Not sure that entirely follows.