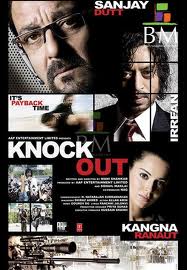 NDTV has reported on a successful challenge brought by Twentieth Century Fox against the producers of the 2010 Bollywood movie, Knock Out, which they had claimed was a blatant copy of the 2003 Colin Farrell classic Phone Booth, a suspense thriller where the star is held hostage in a telephone booth by a sniper.

Now NDTV reports that whilst “Bollywood is known for brazenly borrowing 'inspiration' from Western films”, this may be changing after the Bombay High Court decreed in favour of  20th Century Fox who had brought the action against the producers of the 2010 release Knock Out which stars Sanjay Dutt, Irfan and Kangna Ranaut - although it has taken 3 years to reach a conclusion. The case was first filed just before Knock Out was about to release, and at that time the court had issued an injunction against the release after watching both the films. On appeal, the producers were allowed to release the film, subject to the deposit of R 1.5 crore (which I make as approximately £180,000 or US $280,000) with the court. 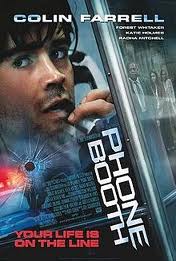 Now the court has awarded Rs 1.25 crore (£152,000 or $230,000) to Fox and, say NDTV, "Furthermore, the producers of Knock Out are not permitted to exploit their film in any manner whatsoever from March 5, 2013 onwards” adding “This is possibly a landmark judgment in the history of such litigation in India as it also constitutes the highest payment for copyright infringement in the country".

Is this right? I struggled with currency conversion and the concept if the "crore" –  I am told by the great god Google that 100 crores is a billion Rupees - and the “lakh crore” is a trillion Rupees. If any of our Indian friends can add to this, or the details of the judgment,  I would be most grateful.

Apologies for reversing the film titles in the penultimate paragraph of my first posting of this update - yes - this made no sense at all (!) and a big thank you to our eagle eyed readers for promptly alerting  me

It's all in the commas.

Given scale of economy in India this works very well. You can even be a Lakh patti and Crore patti - people who have wealth of more than a Lakh or Crore respectively. Great if you can't wait to be called a millionaire! For example to be getting a Rs 1Lakh + salary ($1,846) is a very big thing in general society.

So from a developed country perspective the US$280K may sound low, but fines in India are matched to average ability to pay. Traffic fines are in the region Rs 50-200 ($1-4). This is a massive fine by Indian standards and it is good to see the judge giving the maximum. That is the statement.

Rather ironically, the three and a half year prison sentence handed down to Sanjay Dutt for possession of an assault rifle has been confirmed by India's Supreme Court. Not a good week for the Bollywood star, and he must report to prison in four weeks according to the Times.

Prashant Reddy over at Spicy IP has posted a comment on the case in which he says that the proceedings were actually settled and there was in fact no finding of copyright infringement. See http://spicyipindia.blogspot.com.au/2013/03/a-clarification-on-fox-knockout.html Seems just like a Bollywood story to me.