Impressionist painter Claude Monet used to say that colour was his daylong obsession, joy and torment.

If something similar can be said also of copyright, then in my shopping list of daily obsessions/joys/torments I would certainly include (at least) EU copyright harmonisation, the principle of exhaustion, orphan works and Google - or, to be a bit more specific, Google News and the Books Library Project.

Speaking of the latter, it was just yesterday that I found out about the existence of a docu film on its Library Project, which was part of the official selection of this year's Sundance Film Festival. If the other Google film (The Internship) is slightly more light-hearted, Google and the World Brain looks almost like a thriller, possibly one of those Hitchcock-style films you may end up regret watching after your second night in a row spent wide-awake because scared.

The Google Library Project officially launched in 2002 (although it may be argued that the project is as old as Google itself) and, since 2005, litigation has ensued before US courts (for latest developments see here and here). 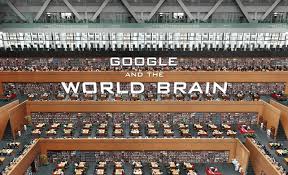 Mass digitisation projects have de facto unsettled traditional understanding of copyright, particularly with regard to its exceptions and limitations. So, if in the US a project like the Google Library has called into question issues of fair use, in Europe recent debate has focused on how to allow access to orphan works. The relevant Directive adopted last year provides cultural institutions with a new exception or limitation to the rights of reproduction and making available to the public. In addition, mass digitisation is central to debates on automated text processing, including specific exceptions for text and data mining (see this Nature article here and UK proposed legislation on data analysis here).

Amidst both excitement and concerns surrounding digitisation projects, a new book written by Maurizio Borghi and Stavroula Karapapa and entitled Copyright and Mass Digitization (OUP:2013) has just appeared in the copyright literature galaxy.

According to the publisher's website these are the key features of this book: 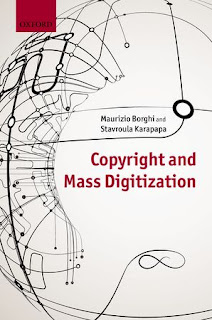 I have personally enjoyed reading this work. The book is carefully researched and innovative in its analysis of the various issues surrounding mass digitisation. In addition, its fresh and engaging prose and style make it a pleasure to read.
Posted by Eleonora Rosati at 4:33 pm