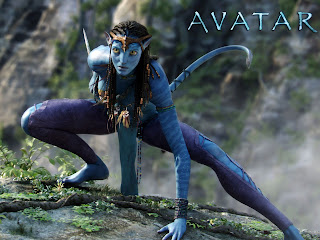 I usually dismiss claims against hugely successful projects as fanciful and speculative – but this one might be a bit different:  James Cameron, director of the world's two all-time highest grossing films, is being sued $50 million for copying art and “ideas” used in "Avatar" - the amazing film of the battle between human mining prospectors asset stropping the planet of Pandora, and the planet's inhabitants, the giant blue Na'vi.  But the plaintiff is none other than the very successful British artist Roger Dean  who designed the iconic artwork for many Yes, Budgie, Uriah Heep and Asia albums, albums for the London Symphony Orchestra and the London Philharmonic Orchestra and for Rick Wakeman, which often feature characteristic fantasy landscapes with organic constructions and exotic lush vegetation. Dean has also successfully designed furniture, and has been responsible for the cover artwork for several video games, including Shadow of the Beast and Tetris Worlds.

Dean has filed a legal action in the District Court in the Southern District of New York accusing Cameron and 20th Century Fox of "wilful and deliberate copying":  Avatar producers Fox and Cameron have already received four other lawsuits against the film which has grossed $2.8 billion globally so far, one from a writer claiming infringement of his earlier script.  In a case brought for copyright infringement, implied contract, unfair competition and unjust enrichment, Dean says there has been unauthorised and "wilful and deliberate copying, dissemination and exploitation" of his original images by Cameron in creating the planet Pandora in Avatar saying “The similarities of each such work are substantial, continuing, and direct so as to rule out any accidental copying or similarity in scenes common to the genre". Arguing that "the overall look and feel of Pandora substantially resembles a Roger Dean world in that Pandora's most striking and memorable features are those created by the Plaintiff" the claim says "The infringing portions of Avatar are so similar to Plaintiffs Works that Defendants and others employed in the preparation of the film must have had access to the Plaintiffs Works”.  In particular Dean argues that Cameron copied two tree forms into the Na'vi homeland, the HomeTree and the Tree of Life, as well as green 'barnacle' plants, and floating islands - another feature on Pandora - and Dean's earlier works.

Before the case, almost everyone had praised the film for its amazing 3D effects, but some had criticised the film for lacking originality - with one commentator saying "the film comes off, to me, like a collage of borrowed ideas (Roger Dean, Hiyao Miyazake and Cameron’s own vast sci-fi cannon including the “Alien” films that also drew from the fantastic art of H.R. Geiger)". But inspiration - or copying? We will have to wait and see.

And  will Dean's cat be joined to the action? A tale is told that Roger worked with watercolour, one of the most difficult mediums of all. For the inside cover of "Yessongs" (cited in the claim as an inspiration for elements of Pandora) his cat walked across the top of the not-quite-dry piece. He had to fix it by spraying over and over again thus creating the interesting cloud effects at the top. Close scrutinization will reveal paw print shapes.
Posted by Ben at 7:56 am

When I went to see Avatar, whilst the 3 hour film sped by - not least because of the rich visual treat, the plot to Avatar was, ahem, limited to say the least. Indeed (and thank yo to my friend Arthur for spotting this) for a 'comment' on the script, a chap called Matt Bateman produced a very amusing version of the plot of Disney's Pocahontas - amended up with just a few alterations to become the plot for 'Avatar'
http://filmdrunk.uproxx.com/2010/01/james-camerons-avatar-disneys-pocahontas or http://www.moviecritic.com.au/avatar-synopsis-revealed-james-cameron-can-now-stop-explaining-it-to-everybody/