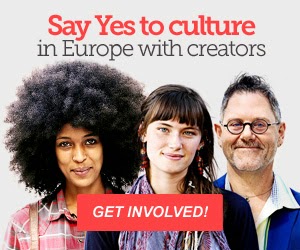 Eleonora in a recent post on the IPKat mentioned "Fix Copyright" a lobby group largely approaching copyright reform from the user perspective (its members including such ardent copyright supporters as the Open Rights Group) - and was somewhat criticised in comments for highlighting that one interest group.

So in the interests of balance - for those of you still wondering how to respond to the EU Copyright Consultation now that you have an extra month to do so, I bring you news of Creators for Europe the polar opposite of the Fix Copyright! campaign, which is encouraging everyone to submit responses to Brussels from the perspective of creators.

Among other things, the group wants the European institutions "to sustain and develop the cultural industries, which depend on copyright to sustain millions of jobs and secure millions of livelihoods" and have produced a simplified version of the Commission questionnaire as well as a petition.

The petition interestingly shows the number of people signing from different Member States - from which we must deduce that the French care more about Creativity in Europe than all other countries put together. On the other hand, the UK doesn't seem to make the list - maybe it's another case of Grande Bretagne - nul points

As I know that Eleonora, responding to those comments on the IPKat, offered to deploy balance should an organisation like Creators for Europe exist - in the interests of similar balance, maybe I should finish by saying that "other positions on the EU Copyright Consultation are available".
Posted by John Enser at 6:27 pm