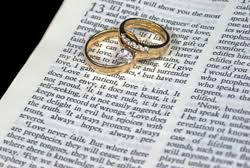 [Note to non-native English speakers and those of other faiths - the reading of the banns is a process which one must go through to become lawfully married in the Church of England and various other Christian denominations - it is not the actual marriage, but a public declaration that it is intended to happen.]

At the end of last week, the UK content industry and ISPs announced their long-expected coming together in what was sometimes referred to as VCAP, but is now officially entitled Creative Content UK.

The very long press release sets out the two major strands to the initiative, first a major education campaign - to which the Government is providing a contribution (dowry?) of £3.5 million, launching in September 2015 - with the subscriber alert programme,  jointly funded by content and ISPs following on from that - although the date on which that particular element will be implemented is not specified.

In detail, we are told

"London – 19th July 2014: Representatives from the UK's creative industries and major Internet Service Providers (ISPs) have come together with the support of government to launch Creative Content UK, a ground-breaking new partnership that will boost consumer awareness of the wide array of legitimate online content services and help reduce online copyright infringement.
Creative Content UK will comprise two key components. The first, which will launch before Spring 2015, will be a major multi-media education awareness campaign, led by content creators and part-funded by government, that aims to create wider appreciation of the value and benefits of entertainment content and copyright. The second component is a subscriber alerts programme that will be co-managed and co-funded by ISPs and content creators and due to begin at a later date.  Participating ISPs will alert and advise subscribers when their accounts are believed to have been used to infringe copyright. Account holders will receive an alert from their ISP, advising them unlawful filesharing may have taken place on their connection and offering advice on where to find legitimate sources of entertainment content.    Speaking today Business Secretary Vince Cable and Culture Secretary Sajid Javid announced the Government's support for this initiative and pledged £3.5 million in funding for the education awareness component of the campaign. Vince Cable, Business Secretary said: “The creative industries in the UK are one of our brilliant global success stories. We have unrivalled creativity - from record breaking musicians to box office films - that excite and inspire people all over the world. Yet too often that content is open to abuse by some who don’t play by the rules. That is why we are working with industry to ensure that intellectual property rights are understood and respected. Education is at the heart of this drive so people understand that piracy isn’t a victimless crime - but actually causes business to fail, harms the industry and costs jobs.”Sajid Javid, Culture Secretary, said: “The Creative Sector is a key driver of the UK economy contributing £8m to the UK economy every hour and underpinning over 1.5m jobs.  Copyright is the foundation on which the Creative industries stand and we must ensure it remains strong and continues to support the growth of the sector. The alert programme shows industry working together to develop solutions which support the long-term health of the UK's creative industries.  It will play a central role in raising awareness of copyright and pointing people toward legal ways to access content and I welcome this effort.”The initiative has cross party support.  Harriet Harman, Deputy Leader of the Labour Party and Shadow Culture Secretary said: “I strongly welcome the partnership between the creative sector and ISPs to work together on the Creative Content UK initiative.  We need to ensure that talented UK creators and digital innovators see a continued financial return from online services for their ideas and efforts.  I hope this initiative will encourage greater uptake of digital services and more responsible use of the Internet to safeguard jobs in the UK and reinforce our position as leaders in world class creativity.”Creative Content UK founding partners include the Motion Picture Association (MPA), the BPI (British Recorded Music Industry), and the four main internet service providers: BT, Sky Broadband, TalkTalk and Virgin Media, with the prospect of other ISPs joining at a later stage.  It also has the backing and support of a broad range of organisations from across the creative community including the BBC, Equity, the Film Distributors’ Association, ITV, the Independent Film & Television Alliance (IFTA), the Musicians’ Union, Pact the Premier League, the Publishers Association and UK Music.The campaign will aim to inform and encourage consumers - ranging from the next generation of digital users to 'silver-surfers' – about the huge range of entertainment content that is available from legal and licensed sources; giving them greater confidence when buying and using content online and providing additional guidance about internet safety.Creative Content UK will operate within the wider context of successful programmes aimed at combating copyright infringement such as the blocking of illegal sites and working with advertisers and payment processors to cut off revenues to such sites.  Full details of the initiative, including its branding and the scope of the education awareness campaign activity will be announced in due course."

Do read the press release in full if you wish to learn what the six participating CEOs (BPI, MPA, BT, Sky, Virgin, Talk Talk) and the 13 supporting industry CEOs think about the initiative - but like all forthcoming weddings, everyone is very excited about it - let's just hope that the marriage is a long and fruitful one!
Posted by John Enser at 6:19 pm