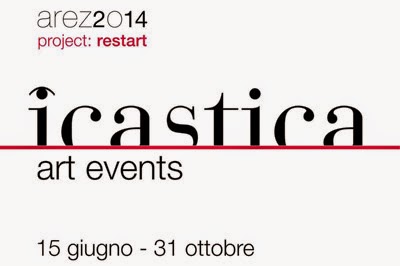 Is there anything more reinvigourating than flying back to one's own native hometown to catch up with family and friends and realise - once again - that copyright is all around us?

This is what happened to me last weekend when, arrived in my native Tuscany or - to be more specific - the town of Arezzo [also hometown to Piero della Francesca, Petrarch, Vasari, and popular contemporary musicians, to name just a few], I asked my non-copyright parents the usual question: "Any news from Arezzo?".

Having started with their usual list of major and minor occurrences, they also casually mentioned that a few days ago something happened in the context of major contemporary art public initiative Icastica.

Now on its second edition, Icastica is a cultural festival that includes indoors and outdoors exhibitions and art installations, as well as performances, recitals, and lectures.

A few days ago, not only did some representatives of an animal protection league protest against a black sheep by Damien Hirst and urge actress Anna Falchi not to visit the offensive display, but the mayor ordered the destruction of an art installation named Promenade.

Back in May it was announced that artists Valentino Carrai, Luca Mauceri and Carlo Trucchi would have started working together with art critic Danilo Sensi on an art installation that would consist of a labyrinth made of cannabis sativa.

The idea was to re-discover old traditions - notably that a couple of centuries ago cannabis sativa was grown in Tuscany also for use in clothing and paper - and convey the message that any material may become art. The labyrinth would have been ready by mid-July, when plants would have reached a height of 2 meters and could be thus given an artistic shape.

Sadly none of the above will happen, as the mayor of Arezzo ordered the destruction of Promenade, on fear that - despite previous authorisation and the results of chemical analyses - the plants might be dangerous for the health of visitors.

The mayor stated: "It was not possible to exclude the toxicity of those plants, even if chemical analyses excluded it; however, lacking absolute certainty, I could not allow them to grow in our town."

As soon as I heard this piece of news, of course I thought: but what about the moral rights of the artists?

Among other things, Article 20 of the Italian Copyright Act (Legge 633/1941) states that independently from the economic rights, and also after these have been waived, the author has the right to object to any deformation, mutilation or any other modification of or any act that is meant to damage his/her work, and which may prejudice his/her honour or reputation.

It is not difficult to imagine that destruction of their work of art would likely infringe the three artists' right of integrity, especially if it is true (as the lab analyses suggested) that the installation would not be dangerous for the health of visitors.

However, subsequent Article 22 states that the author who has known about and accepted the modifications to his/her work cannot prevent their execution or seek removal.

Is this what happened with regard to Promenade?

From the report of local newspaper La Nazione, the response would appear in the negative. Art critic Danilo Sensi stated: "I was requested a certificate that would attest the non-toxicity of the seeds used, which I asked Assocanapa to produce ... Without waiting [for the certificate], the work has been demolished. It's all very depressing, but this story is not over."

What does this mean, that the artists are planning to sue Arezzo municipality for copyright infringement, notably infringement of their right of integrity?

Meanwhile, another pressing question arises: what has happened to all that cannabis? Has it been destroyed or not? If not, who has it?
Posted by Eleonora Rosati at 8:16 pm

I am a strong supporter of moral rights, but, in my view, the integrity right is supposed to defend the author's honours or reputations and not the work itself. If the work is destroyed, how can their honour / reputation be affected? I know that this position is far from unanimous (and I do not know what is the common interpretation under the italian law), but unless we are protecting anything else other than the author (e.g. the US situation, in which the protection against destruction has other basis), I always find it hard to accept a protection against destruction under the typical integrity right construction.

Unfortunately, we can finger-count the moral rights cases

Eleonora Hi
'Hemp' is widely grown for ropes and other fiber purposes, and the variety grown for this purpose has has a THC content of about .5 to 1 percentage (compared to about %10 for the varieties used for party time). And THC is a low toxicity drug. The mayor would be in more danger if he had had an extra glass of Vin Santo with his desert :-)