The Paris Court of Appeal recognized on October 13 that the opera Le Dialogue des Carmélites, as staged by Dmitry Chernyakov for the Opera of Bavaria in 2010, had violated the moral rights of the composer and the librettist. The music for the Dialogue des Carmélites was written by Francis Poulenc and its libretto adapted the eponymous theatrical work of Georges Bernanos.

The opera tells the story of a young French aristocrat, Blanche de la Force, who is painfully shy and fearful. As the French Revolution is about to start, she decides to become a Carmelite, or rather, to seek refuge in a convent. After the Carmelites are forbidden by the revolutionaries to be nuns and are ordered to go back to their civil life, they take a vow of martyrdom. Blanche flees the convent. The nuns are later arrested and sentenced to death.

In the last scene of the opera, which is the only scene in contention in this case, the Carmelites go one by one to the scaffold, while singing Salve Regina, a choir which decreases voice by voice after the sound of the ax, repeated regularly by the orchestra, indicates that the blade of the guillotine has cut off yet another head. Blanche suddenly appears at the scene, serene, just before the last nun, the young Constance, is about to be guillotined. Constance dies knowing that Blanche has been able to overcome her fears. The opera ends with Blanche calmly climbing the steps to the scaffold while singing the Veni Creator, and dying. The orchestra then plays again the opera’s motif, first played in its opening, albeit more plaintively this time. The whole scene is chilling. 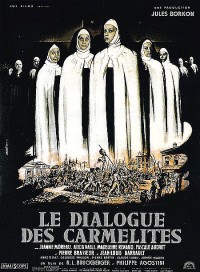 Dmitry Chernyakov chose to place the action of the opera in the contemporary world, not during the French revolution. There is no guillotine in the last scene, and the nuns are instead held prisoners in a shed, waiting to be gased. Blanche suddenly arrives at the scene, albeit not to share the nun’s martyrdom, but to save them one by one, each of the rescues being punctuated, rather oddly, by the sound of the guillotine. Blanche then goes back inside the shed which explodes, killing her. It is unclear whether it is an accident or a suicide.
The heirs of Poulenc and Bernanos, as holders of their moral rights, brought an action in France against the director, the editor of the DVD of the opera, published in France, and the Munich Opera in the person of the Länder of Bavaria. They argued that the staging transformed the end of the work so much that it had distorted it and thus had violated the moral rights of the authors. Under Article L. 121-1 of the French intellectual property code, authors of an original work have a moral right over it, which is perpetual and transferable upon death.

The Tribunal de Grande Instance in Paris rejected the request of the heirs in 2014, concluding that the changes made by the staging were not a distortion violating the moral rights of the authors.

On appeal, by the heirs, the Länder of Bavaria argued that neither the libretto nor the music had been changed, and that only the staging, as performed by the singers during the last scene of the opera, had been modified. The Länder further argued that Mr. Chernyakov’s staging had conferred to the work "a more universal significance and is consistent with the spirit of the original work, since it respects its essential theme, which is hope.” One of the DVD producers argued that the appellants themselves had recognized in their conclusions that neither the libretto nor the music had been modified by the staging, and, that therefore, "the debate is outside the moral right and the legal debate, but is about the interpretation of the work and the artistic and historical controversy."

The Court of Appeal stated:

"that if some freedom can be granted  to the director performing his staging, this freedom is limited by the moral rights of the author and  respect for his work, his integrity and his mind, and that this should not be distorted."

The Court of Appeals admitted that the final scene of the opera as directed by Mr. Tcherniakov does not change the dialogue which is not even spoken during the final scene, nor the music, as the orchestra dutifully played each sound of the falling guillotine even though there was no guillotine on stage. However, the Court noted that these changes are “enigmatic or incomprehensible, or imperceptible to the neophyte."

For the Court, even if Mr. Tcherniakov’s staging respected the central themes of the opera, which are hope, martyrdom and the transfer of grace, "it profoundly changes the end of the story as intended by [the authors] (...) and is the climax of the story, magnified in Poulenc's opera, where text and music come into perfect harmony."The Court of Appeals concluded that the staging had distorted the spirit of the work.
The sale of the DVD is now banned in France, but the heirs have not obtained the complete prohibition of the representation on other stages. This must be welcomed, as it would be dangerous for freedom of expression, particularly freedom of artistic expression, if moral rights could thus become a universal instrument of censorship.
Posted by Marie-Andree Weiss at 12:50 pm