5Pointz: a stronger legal protection for street art … or not? 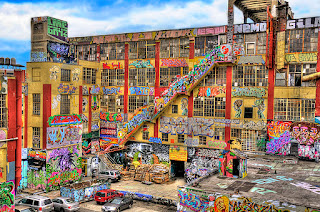 The 1709 Blog is delighted to host the following contribution by Angela Saltarelli (Chiomenti) on the recent decision of the US District Court for the Eastern District of New York in the in the 5Pointz case.

“The US District Court for the Eastern District of New York has recently ordered a real estate developer to pay millions of dollars in damages to a group of artists to compensate them for destroying their 45 famous aerosol artworks which were at the 5Pointz building in Queens, New York City.

5Pointz was a former factory owned by Jerry Wolkoff, who bought the 19th century Neptune Meter factory in Long Island City in Queens in the early 1970s. He started leasing the space as artists’ studios in the 1990’s. As a result, street and graffiti artists started using his building to create their works. In 2002, Wolkoff appointed famous street artist Jonathan Cohen as 5Pointz’s de facto curator. 5Pointz thus became soon a tourist attraction drawing thousands of daily visitors, including busloads of tourists. Movie, television and music video producers used 5Points as a location.

Starting in 2011, there were rumours that Wolkoff wanted to destroy 5Pointz and turn this space into luxury condos. Subsequently, Cohen filed an application before the City Landmark Preservation Commission to preserve the site as one of cultural significance, but the application was denied because the artistic work was of too recent creation.

After the City of New York declined to declare the building a landmark, 21 artists (including Mr Cohen) decided to sue Wolkoff and four of his real estate entities asking for a preliminary injunction to prevent the planned demolition. As soon as the Court denied the plaintiff’s application for preliminary injunction, Wolkoff whitewashed the entire complex overnight without waiting the final Court’s decision.

After the demolition, the plaintiffs’ requests for damages went on claiming that the defendants had acted contrary to the Visual Artists Rights Act (VARA), which introduced a new provision into the US Copyright Act added in 1990 to comply with the Berne Convention granting some moral rights, namely the right of attribution and the right of integrity.

As to the right of integrity, the author can prevent the destruction of the work of visual art when can be prejudicial to artist’s honor or reputation or when the work is of recognized stature, namely when the visual artwork is viewed as meritorious and this stature is recognized by art experts or other members of the artistic community. The Court found that 28 of 49 destroyed works at 5Pointz achieved recognized stature, and eight more were modified to the prejudice of the artists’ honour or reputation.

One of the exception raised by the defendants in this case was that street art works are ephemeral per se and that VARA should not afford protection to temporary works. Before this case the application of VARA to the works of exterior aeorosol artists had not been discussed in courts.

The court rejected this legal approach saying that VARA resolves the tension between building owners’ rights and the artist’ rights, including also temporary works. Indeed, Section 113 of VARA provides for two hypotheses when a protected work of art has been integrated into a building: (i) when the artwork cannot be removed from the building (in this case the artist may sue to prevent the destruction of the work unless he waived this right) and (ii) when the artwork can be removed, so contemplating that the work can be temporary.

In the latter case, VARA gives the opportunity to the artist to save the work upon receipt of a 90 days’ written notice from the building owner. If the artist fails to remove within the 90 days or if the owner could not notify the artist after making good effort, the artist’s VARA rights are deemed waived and the owner may destroy them without consequences.

The Court finally held that the artists’ works were legally protected under VARA and that each artworks could have been removed from 5Pointz walls. Then the Court stated that the defendants broke the law in willfully destroying 5Pointz before having the Court’s permit and failing to give the 90 days’ notice to the artists to remove their works provided by VARA.

The Court awarded the owner to pay the maximum statutory damages under VARA for each works for the whole sum of USD 6,750,000.

The decision was greeted with enthusiasm by the artistic community as a further validation of street art. For the future, more real estate owners will probably give artists the time to remove their works.

On the other side, this decision could also hinder street art as many real estate owners could be reluctant in the future to authorize artists to use their walls as Wolkoff did in 5Pointz.”
Posted by Eleonora Rosati at 2:34 pm