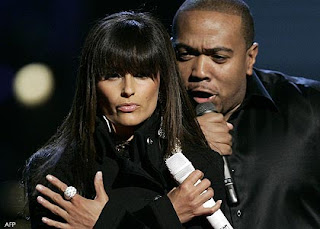 
Their hit "Do It", which appears on Furtado's multi-platinum album Loose, is alleged to contain elements of the song "Acidjazzed Evening", originally composed in 2000 as a computer recording by Janne Suni, a Finnish demoscener [what's that?]. The song was subsequently re-recorded by Norwegian musician Glenn Rune Gallefoss and Kernel Records acquired rights in the track in 2007. Kernel filed a claim against Timbaland and his record label in the Miami-Dade Division of the US District Court Southern District of Florida on 11 June.

The claim cites elements of a 2007 radio interview, in which Timbaland reportedly responded to the allegations saying:


“That mess is so ridiculous ... It’s from a video game, idiot. Sample and stole is two different things. Stole is like I walked in your house, watched you make it, stole your protools, went to my house and told Nelly, ‘Hey, I got a great song for you.’ Sample is like you heard it somewhere, and you just sampled. Maybe you didn’t know who it was by because it don’t have the credits listed [sic]”


Timbaland reportedly went on to explain that he did appreciate the possibility that someone might bring a copyright claim, but that it was unclear whether or not the sound he utilised was public domain.


So did they "Do It"? Why not judge for yourself?
Posted by Nick Eziefula at 2:30 pm